4 years ago by McKenzii Webster

New York gave birth to hip hop and subsequently produced many of its greats. It continues to bless us with immense talent today. One great in the making is a Brooklyn-born MC Radhames Rodriguez, musically known as Radamiz.

Radamiz has been steadily making waves, and today he is ready to make his biggest wave yet with the release of his album Writeous. The album has been many years in the making, and when asked why this project has taken as long as it has to see the light of day. Radamiz responded,

'Writeous' took so long, because it took a while to learn myself, grow, and really be able to express my true spirit through music. I was removing all the shit that wasn't me for the years it took to make this. The project was evolving as I evolved. 'Writeous' has had so many complete 'final' versions of it with full songs, but now was when my gut told me 'aight Rad, you're done'. God told me I was done.

As the saying goes, timing is everything. Radamiz has beautifully crafted an 11-track soundtrack to life that is truly the definition of what he has branded as "Travel Hip-Hop". He is talking to those, like himself, that believe enough in their dreams to stop at nothing in order to make them come to fruition. As he puts it,

'Writeous' is the soundtrack to the emotional rollercoaster we go through while achieving our dreams, achieving ourselves in our most pure way. 'Writeous' is supposed to sound like a hustler, a believer, a go-getter, the strong, the weak wanting to be strong.

Standouts include "God Talks to Me A Lot", "Sumner", "Am I Black Too?", "One Night Stan", and "Writeous". The entire project is pretty much full of gems. It is on standout "1 Crown" that listeners not only get an opportunity to hear Radamiz spit his melodic poetry, but he is joined by four New York heavy hitters that are making waves of their own - I.O.D, Kidaf, Oswin Benjamin, & Latasha Alcindor. When asked why he enlisted the help of many of his peers on this one track, Radamiz stated,

"1 CROWN" is a snap shot in time for the New York Hip Hop scene. It's everybody that has influenced my career in one way or another coming together and ripping shit together. It's about proving your excellence. I hoped that every feature on the song killed me, because that's how you show me respect on a record. As long as we all play our part correctly, this song is will legendary in the future more than it is now. I can't wait to look back on this song. Everyone put on.

Not only did Radamiz made sure that listeners fully understood his intent with this project before pressing play. For his artwork, Radamiz commissioned artist RIP Josama to assist in conveying the meaning behind Writeous. As Radamiz puts it,

I've been a fan of RIP Josama's work for years now and always wanted to commission him to do some work for me. He allowed me to go through all of his work for inspiration. We almost made something brand new but I found this snapshot of the baby treating a gun like a baby bottle and was shocked with so much truth and relatability. The most important part of the painting is the cropped hand/arm right next to the baby. If "Writeous" is knowing one's own truth, then a baby misunderstanding the negative as nutrition hints at how deep sometimes our influences are rooted even before we really reach consciousness. "Writeous" is about finding me, and going deep to realize how much things are actually not me to let the true me shine. The cover is indicative of how deep that search tends to be. The amazing Keyona Simone saved my life by designing the artwork but Josama's consistently impactful art helped me tell my story too.

Writeous is New York at its finest - unapologetic, gritty, colorful, and honest. Radamiz put it all on the line, and it definitely paid off. Be sure to stream Writeous as it promises to make chasing those dreams a lot easier. 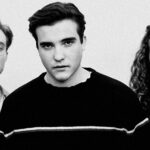