One challenge that frequently arises in the electronic music scene is overcoming the fleeting nature of musical trends and prolonging the lifespan of an artist's hype. The key to breaking from the mould as an artist, is to stray away from trend following tactics by imagining and delivering a personalized sound. A couple weeks ago EARMILK had the opportunity to internationally introduce French musical prodigy Douchka, with his first single "Don't Leave" off his latest EP Together. With his retro soul vibes tapered into innovative sound designs, Douchka proves himself as an artist who does not bind to EDM trends and shifts focus to developing a modern classic sound.

His latest EP Together is the second to be released off Paris-based Nowadays Records, who've also signed incredibly talented acts including Fakear, Unno and Phazz. Contributing to the buzzing French Future Beat scene, Douchka's latest EP blends warm R&B soul with sharp synthetic details, that encapsulates his rare timeless sound. The artist adds pizazz in his sound in tunes such as "Rosmeur" with a rich accordion-imitating synth and subtle Lido-esque liquid drops. "All Night Long" depicts a danceable nu-disco groove, with pouncing synth work and unconventional drum patterns.

EARMILKcaught up with the young producer to discuss the new record, being a part of the Nowadays family and the electronic scene in France...Douchka's also tucked in a special treat for EARMILK readers, an unreleased track that didn't quite make the cut for Together. "Love You Still" is a minimalist future bass track with mellowed vocals and clunky synth work. The track retains the same emotional aura present in Together, but dips itself into a vaporwave coating riddled in classical tendencies.

The 24-year-old producer reigns from Rennes in Brittany, France and interestingly enough his background begins as a graphic designer as he's attended the school of Fine Arts of Rennes. Douchka discussed that music did not play a significant role in his life until later in his life, citing the radio and his older brother as original sources for music discovery. It was labels such as Ed Banger and Kitsuné that changed the game for the young artist, "The sound of this time was completely new and crazy for me. It's a thing that makes me quite nostalgic when I look back to when we were all on Myspace.". Speaking to his own true textured sound and layered intricacies, Douchka cites Dorian Concept's Joined Ends as one of his most influential records highlighting the notion that he "brilliantly combines concept and technique".

Regarding the booming electronic scene in France, Douchka had endless amounts of positive words to share on the talents of his home. What the artist shows concern for, is how French media is undermining and cautiously approaching the Future Beat sound. Douchka shows props to his home label Nowadays, stating "It's thanks to players like Nowadays Records or my booker Allo Floride that we exist outside our studios. But quality artists such as Stwo, Phazz, Astre, Jumo, Kultur ... There’s talent galore."

With both EP releases off Nowaday Records, he noted the aspect of "family" and importance of a human relationship between record label and artist.

"I think with Nowadays Records, this concept is as valuable, if not more valuable, than the music itself. That is why I am very proud and fulfilled to be here for a year now... I do not see Douchka moving forward without Nowadays. That's a lot of work but also a lot of love."

Douchka stands his ground as an electronic music renegade with his creative sampling of fervent vocals over glossy melodies, sculpting a textured experience for listeners. With outstanding tracks such as "Don't Leave", the artist shows an undeniable musical literacy in approaching his craft.

"Although many musicians detach because they find it too "fancy" or "weird," I work with very few samples. I prefer to record a real piano if I need it rather than retrieve it from a track already exists."

Together took a total of six months to compose, in comparison to his previous Joyful which took six. The majority of the EP at the seaside in his childhood home, Douranenez. In developing a signature sound, Douchka favored the pop influence he was developing, stating he "certainly did not want an EP for clubs and DJs."

Moving forward, Douchka continues to work on his live set, collaborations and new work under another alias. What Douchka offers to the table falls beyond artistic innovation and listeners will uncover an inspiring mystique in Together's paradoxical nature. The irony in Douchka's nostalgic yet futuristic compositions highlights the producer's wit and artistic efforts in the construction of generationally important music. 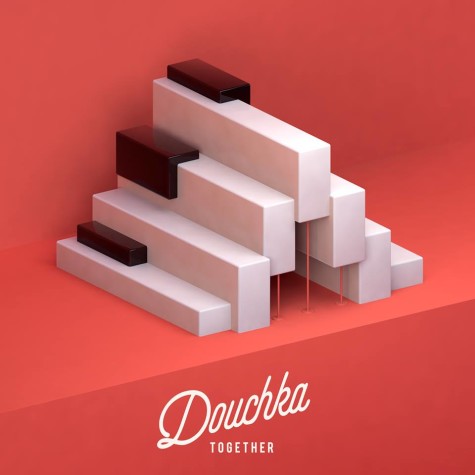