Last weekend saw New York City's Governors Ball Music Festival return to the iconic Randall's Island Park. With a line up that's become internationally famous for its diversity, the festival welcomed everyone from Drake to The Black Keys to Flying Lotus. Featuring an ultra popular Silent Disco tent, tons of food options curated by The Infatuation and gorgeous weather, we can say that the festival was a success. To conclude our experience which saw Randall's Island the most populate we've ever seen for a festival, we've put together some superlatives that should sum everything up pretty well for those who missed out. Tickets are already on sale for next year, check it out here. 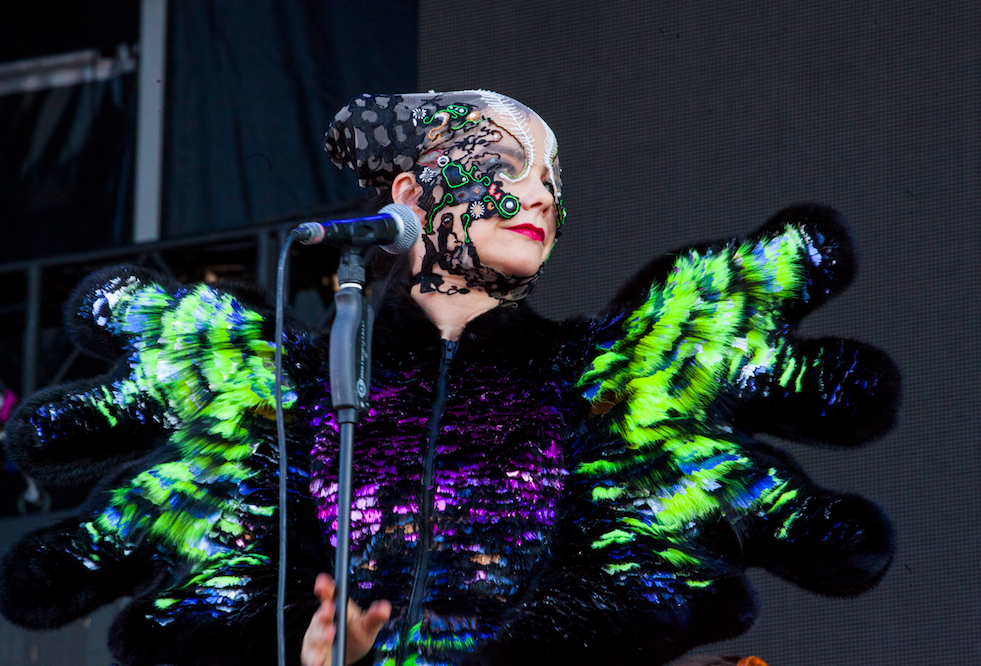 Björk had this in the bag. Even with Lana Del Rey donning a glorified Yankees uniform and Weird Al bouncing around in a fat suit, the shock-value veteran gets the award for best stage style. The neon moth costume/headpiece combo (designed by Danish artist Nikoline Liv Andersen and personal assistant James Merry respectively), although striking, was not new territory for the Icelandic avant-garde musician, and didn’t take away from the set that dabbled all over her wide-spanning discography. She opened with a string section and new track “Stonemilker” before taking the crowd back to her “Hunter” and “Bachelorette” days. With an exhibit at the MoMA and a recent residency at Carnegie Hall, Björk showed up ready to claim her title as Belle of the [Gov] Ball.

Best Comeback from an Injury: Florence + The Machine

Songstress Florence Welch has hit superstardom with her releases with Florence + The Machine. Debuting her latest album, How Big How Blue How Beautiful, at #1 the week prior, she took to the main stage at Govball with much excitement from concertgoers, and it seems, herself as well. As she led her band on in an animated, passion-fueled performance, we quickly noticed that she wasn’t wearing shoes, and quickly remembered why: she had injured her foot badly earlier in the year, leading most of her performances to be seated and acoustic during her recovery. She noted her excitement to be back on her feet as well as the city where her injury occurred, and it was clear through her performance that it wasn’t getting her down: she may have led herself to be the best performance of the weekend.

Although Sharon van Etten’s set was the opposite of Björk’s in terms of fanfare and pizazz, her presence was still felt wholly. She peppered the crowd with personal tidbits (her parents were in the crowd), had her name projected in plain b&w font as a backdrop (if you didn’t know, well now you knew), and appropriately dressed in all black for the winding, woeful, cathartic journey to the depths of our souls – where typically only talented musicians dare to play tour guide. She opened with her popular single, “Serpents,” and introduced a new song, “All Over Again,” to a crowd that stood solemnly mesmerized by the ease in which she commanded the stage. No glitter, just a whole lot of gumption bottled up in one talented female rocker. When asked about the caliber of female talent in the Gov Ball lineup, she said, “Really excited that a lot of the acts this year are strong, resilient women doing their own thing. They are all so different in personality and style. Something for everybody. If I could see it all, I would – and take notes.”

One of our favorite constants about Perth psych-rock band Tame Impala’s live set is the oscillator and laser light show that visually complement the synth serenade going on in our ears. But this year, with a late-afternoon sunny Sunday scheduling, Tame Impala didn’t get to make such a light-bright splash. Don’t get us wrong, we still swayed to the swingy chorus of “Feels Like I Only Go Backward,” passionately sang along to “I’m Just a Man” (even as women), and definitely lent our cheers to the explosive uproar heard during the intro of “Elephant” – but after the hour-long set, we felt like we had just gotten our feet wet for the group’s forthcoming third album Currents (out July 17). 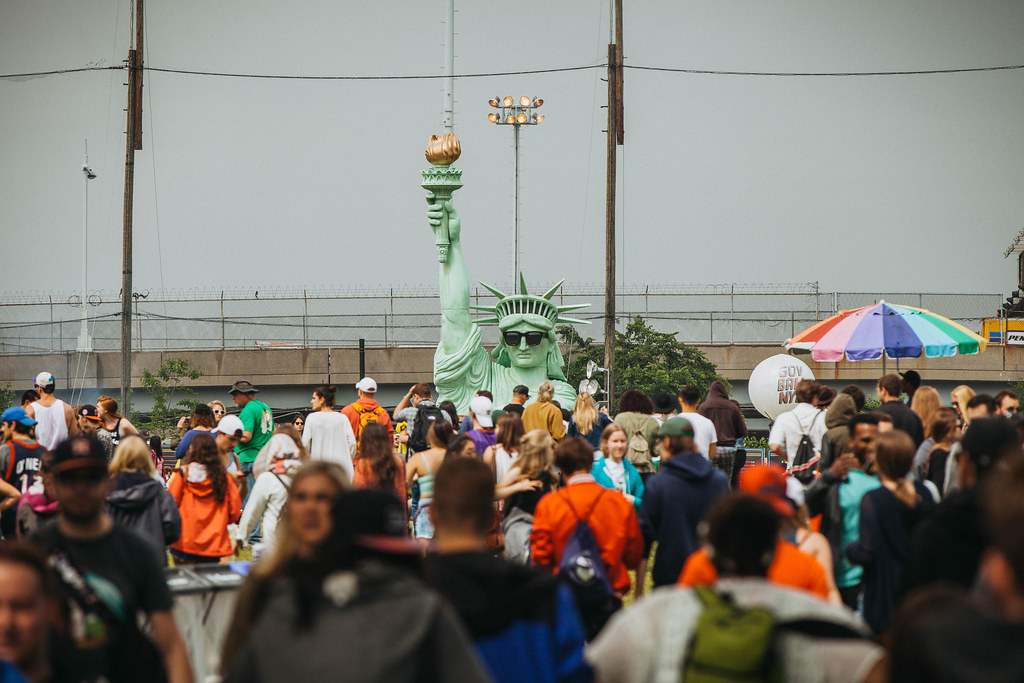 You kind of have to know what you’re getting into when you decide to sidle up to the Weird Al stage. The proof is in the pudding – or at least his first name. It’s going to get weird.

So of course the creative king of cover songs would bring some silly to the stage in the form of multiple props (like a Segway for “White & Nerdy”) and costume changes (a black suit and fake beard for “Amish Paradise”). He even added a few Miley Cyrus songs to his repertoire that we hadn’t seen performed before. In the litter-strewn fields of Randall's Island, it felt like we were surrounded by the underage and over-served, but the 55-year-old Mr. Yankovic gave us the fun, young refuel we needed to forge through the crowds – and appreciate, or at least accept, that some people were wearing their middle school lacrosse jerseys.

London's electronic group Hot Chip has accrued a loyal fanbase through their 15-year career of making music together. For those fans who have seen them before, they might have remembered a cover the group debuted back in Milwaukee, Wisconsin at the end of May of Bruce Springsteen's "Dancing In The Dark." But seen before or not, the gorgeous rendition the guys closed with was the perfect way to start closing out the weekend as dusk took over the festival.

The Australian brother and sister duo Angus & Julia Stone could have also won for “Best Folk Act” had we made that a category, but genre pigeon-holing aside, they delivered a vocally sound, impressively solid set. Although it drew mainly from their self-titled album from last year, they offered a few oldies such as “For You” – a crowd-pleasing sing-a-long for people that consider these two folk-rock royalty. The Sydney celebs made the crowd feel like they were our best friends – Julia acknowledging that she just got her dress the day before in Williamsburg and it kept riding up. Stars, they’re just like us.

Sunday's lineup held the most promise for electronic and dance music fans, but not everything went so smoothly. Since Govball’s first festival in 2011 (when it was actually on Governors Island), the organizers have made a conscious effort to help concertgoers avoid lineup conflicts. One of those efforts is to stagger performances at each of the four stages on Randall’s Island. An improvement from the back and forth between two stages attendees had to make at the festival’s initial run, there were a usual two active stages at a time. With that respect for people’s time also comes sound control, helping to respect the ability to actually hear the artist you’re watching, with no conflicting sound from other performances.

As Big Gigantic took the stage on Sunday, their larger than life energy promised to rock the Honda Stage with their bass-filled funk tunes as the sun set. But we quickly realized: we were lucky to be standing close to the stage. The power of tracks like “Get On Up” just didn’t travel very far from the stage’s speakers, making the experience at the stage a lot less amped than we would have hoped.

Noel Gallagher gave the crowd what it wanted: an energetic rock show…with a side of 90s radio hits. As a surprisingly sparse group of obvious 80s babies gathered round, we prepared to watch the very quotable and oftentimes outspoken former Oasis frontman and his High Flying Birds take flight. Not one to cave to the masses (he’s a bit annoyed by the all reunion rumors, guys), we were absolutely giddy when he launched into “Champagne Supernova” and then later, “Don’t Look Back in Anger” – right after saying “this one is for the moms and dads out there.” A presumptuous notion, yes – but again, he has never been one to censor himself. He played hits from his newer music moniker, such as “If I Had a Gun” and “The Dying of the Light,” and the crowd ate it all up, because even his 2011+ offerings have all the delectable ingredients of those tracks from the past.  Elevating his set even more was a combination of wonderful things –a welcomed breeze coming off the East River, the sun setting behind the NYC skyline, and that feeling of being surrounded by people reliving the same emotional high.

Canadian producer and DJ A-Trak has been instrumental in in many ways in the music industry. Winning the DMC DJ World Championships at just age 11, he went on to produce hip hop, electro, head up Fool's Gold Records and help revive vinyl's importance and the art of live DJing. And his prowess, as usual, showed on stage.

About halfway through his performance, though, he had a little slip up and the music went silent. Cheering the crowd on, he quickly let us know that the music would be back shortly. The night before a similar silence drape over the crowd at the main stage during a technical malfunction at Deadmau5's performance, but through keeping in character there was no reassurance, just waiting around. A-trak recovered quickly, amping the crowd up with Party Favor's rework of DJ Kool's "Let Me Clear My Throat." He later noted on his Instagram that his computer had crashed, and that after it rebooted, the crowd was even wilder than they had been before.