6 years ago by Aaron Smith

Dillon Francis blew us away this year when he teamed up with Totally Enormous Extinct Dinosaurs on the track "Without You". The original track found a nice middle ground between the two artists styles with Francis's incredibly clean production blended perfectly with Orlando Higginbottom's laid back vocal. The track has now been given the Treasure Fingers treatment and it is nothing short of spectacular. The Oklahoma native has been bringing his touch of hard hitting disco to a whole bunch of releases this year and the culmination of these three incredible talents is awe inspiring.

The track opens with a prime example of Treasure Fingers punchy drum sound before leaking in the untouched innocence of Higginbottom's vocal. Clean bells rest behind the vocal track and gives you a moment of pure clarity before pushing you head first into an addictive deep slap bass and some rather interesting percussive patterns showing off Treasure Fingers unique blend of classic disco sounds and club influenced production. 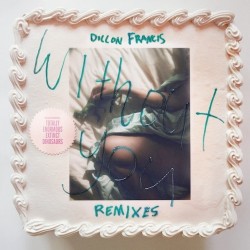