Brooklyn, the borough known for breeding gritty street soldiers who began earning their stripes as stick-up kids. While the area has developed an honour-amongst-thieves mentality, "Land of the Crooks" is without a doubt the de facto anthem for its inhabitants.

M-Phazes, who most recently contributed to "Bad Guy" (the opening track on Eminem's last project, The Marshall Mathers LP 2), supplies a banging instrumental. Meanwhile, some of Brooklyn's finest, including Random Axe emcee Sean Price, M.O.P member Billy Danze, and Brownsville resident Maffew Ragazino, all get a chance to pay tribute to the place they call home as DJ Babu comes in with the vicious cuts of Jeru The Damaja's "D. Original". With a lineup like this, how can you go wrong?

Give the track a listen and a download and watch out for Unearthed, the upcoming compilation album from Coalmine Records, dropping in January. If this is just a taste of what's to come, we could have a modern day reincarnation of the Soundbombing series on our hands. 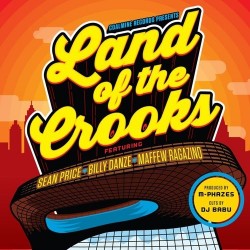