If you've ever needed an example of a modern day bait and switch, look no further than Drake's Nothing Was the Same. An artist cemented on the crossroads between rapping and singing, the much hyped about Toronto native's objective to please both sides ultimately works against his favour. Resulting in a lacklustre affair (he should have gave the now classic "Shook Ones Part II" a few more listens as there is indeed no such thing as halfway crooks) there's something satisfying about Kendrick Lamar calling him out using that same instrumental during the Top Dawg Entertainment BET cypher. Naturally, the polarizing project left a bitter impression on those of us that were expecting more rapping and less softness.

What followed the album was a slew of mashups, covers, and remixes that helped preserve the popularity of the YMCMB artist; naturally, some have been more well received than others. Offering their own perspective,Sampha assisted with "Too Much"- one of the better tracks on semi soft crooner's album (as much as I put Drizzy down, I'll give him credit where credit is due).  Sean Dee and Jeff Sontag create a powerful re-imagining that could easily go toe to toe with the original. What follow is nearly 4 minutes of smooth, juxtaposing talents that come together in such a way that both parties are able to flex their musical muscles, with Sontag's eclectic history of working with a variety of instrumentals and Dee's fluid and fast flow grounding the track. Give the track a listen and explore a fantastic take from two hard working artists, but don't blame us if you start seeing a bunch of babies in the next 9 months. 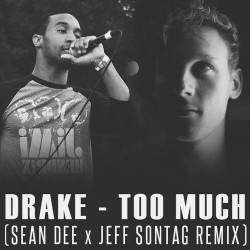