Canadian brother and sister, YUG and Avita have been working together for many years, but the duo has accelerated their musical journey within the last year under the name of Boss And Swan. In 2012, their song "Raging Bull" was placed in the horror film "American Mary" and when German producer ATB heard the song he knew he had to work with them. Most recently, the duo have been on tour with ATB In Concert. We were able to catch up with them at their last stop on the tour in NYC where they stunned the crowd with their tracks "Raging Bull", "Walking Awake", and the real show stopper "Beam Me Up".

EARMILK: To start this off, why don't you tell us how Boss & Swan got started on this journey.

YUG: It's been a long time in the making, ultimately. We worked together for so long and then we parted ways for a bit on our own careers and then we finally came back together to fuse what we do together. I'm the producer and she is a great songwriter and we brought both of those worlds together to kinda get our sound.

EM: So you dove head first into this project in 2012, and one year later you are on tour with ATB.

YUG and Avita: Yeah it's been crazy. It has been incredible.

EM: How would you summarize your experience on this tour?

YUG: I don't want to say incredible again, but the level and the caliber of the people that we are working with and the vision and the timing of everything is corresponding really well with what Boss & Swan are doing right now. We are that fusion of DJing and the live aspect which is what ATB in concert is doing. So it is just the perfect timing for us. We were already on that path and we've now accelerated on this path and we'd like to go further with Boss & Swan after this. There was one defining song, one defining moment that kind of made this come to life. That song was "Raging Bull" which is our first song that we created. We recorded that roughly four years ago now and it wasn't until about a year ago that I got to producing it. I stayed up for two days straight tweaking things and fusing her vocals into my production and it just came to be. Then we thought lets step off of the dance floor and step outside of these borders and bring a new style into this sound. That has been our inspiration to keep Boss & Swan moving forward.

EM: So you guys collaborated on a song with ATB recently, right?

Avita: Well, I don't know if you know the story about how Andre found us, but basically we had our song "Raging Bull" placed in a film, "American Mary". Since the film had worldwide distribution, it just so happened that Andre purchased the movie on iTunes on a flight on his way back home and he heard our song in the background. The second he got off the plane he was emailing us, tweeting us, facebooking us and we were wondering who this guy was at first. Once we discovered that it was ATB we were really excited and he invited us to go to Germany to work with him. We flew out a couple of weeks later and collaborated on a bunch of songs with him. The ones we will be playing tonight at the show will be "Raging Bull", "Walking Awake", and "Beam Me Up".

EM: So did you guys alter your original version of "Raging Bull" for the show?

YUG: Yeah, we sort of gave it a dance remix as that's obviously Andre's forte. You know, he saw it as a great piece of music and he thought it could be reworked and re-exposed into this dance realm. We make our music with that in mind. We want it to have the mass appeal to the different genres but still be a separate genre within itself.

Avita: It was really fun redoing "Raging Bull" because we were there when it was happening in Germany. We were all vibing together and all had our own input. We were just really excited about the direction and we are really happy with where it has gone. Working with Andre has been a great experience, not only is he an incredible producer but an incredible person too.

EM: Since this is the last stop on the tour, what is your next move?

YUG: That is a discussion in the works. We've got such great vision and now we've got such a great team that we're working with. So now it's about the meeting of the minds, putting our heads together, and just figuring out that path and that game plan. ATB's album will be released in January, which we have three songs featured on there. We will definitely be taking a trip back to Germany in the future and potentially an album for Boss & Swan in the near future as well, post ATB's album release.

EM: You keep mentioning this "vision", can you give us any insight to that "vision" or is it top secret right now?

YUG: We are just going to be fusing the best of what she does and the best of what I do together. We have to bring that to the forefront acoustically and on a playing level. Her singing, she is just incredible, so it is going to involve that and some crazy beats. It is going to be the dirtiness and the combination of both of us. That is what Boss & Swan brings, the beauty and the grime, the duality. Hence the name.

EM: Is there anything you want people that are hearing you for the first time to know about you?

Avita: Yeah, we want you guys to know that we have some great music that we want to share with you guys, both the stuff that we are doing with Andre and the stuff that we are working on right now on our own. We are excited to share it all. We've been working together for so long and we are finally working on something that is really exciting and positive. We are in love with the music that we are making and we can't wait to get it out there and have people listen to it.

YUG: That about sums us up, right there.

EM: Alright, great! Thanks for sharing with us. 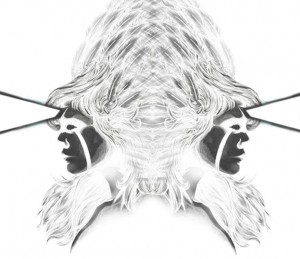