Out of Boulder, the typically heavy hitting duo Big Gigantic has shown fans their softer side with their latest release of "Love Letters," featuring vocals from Sabina Sciubba. Sciubba, known for her role in the New York-based electronica group Brazilian Girls, will be releasing her own solo album as well as an album with Brazilian Girls next year.

The Big Gigantic duo, Dominic Lalli and Jeremy Salken, are known for their live saxophone and heavy bass, but on this track they've matched some softer sounds with Sciubba's lamenting vocals creating a song that continues to push their musical boundaries. We can expect "Love Letters" to be featured on the guys' forthcoming album, expected in 2014, which will feature more of their trademark bass. Meanwhile, Big Gigantic is in the midst of their Sky High Tour which will bring them all around the US. These guys have been growing exponentially recently, so if you're not familiar with them yet, you better get to listening. 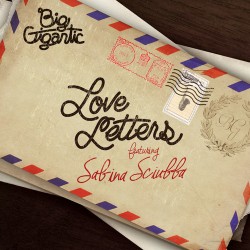