We are in the final week countdown to Music in the Middle, which kicks off this Friday in Middle Tennessee. Today we present to you our final 3 artists to check out.

San Francisco-based house producer Lane 8, or Daniel Goldstein if you want to get fancy, made quite an impression when The Magician gave his debut single, “Don’t Want You Back”, a chance on the 23rd installment of his popular Magic Tape series. Lane 8's next single "Dusty" launched his career into the upward spiral that is is today. It doesn't hurt that he also has the support of some of the worlds more popular DJ's, from the UK’s Jody Wisternoff and Kidnap Kid, to California’s Viceroy and Geisha Twins. Lane has been keeping busy with the releases by dropping remixes to Fleetwood Mac and Brandy, with one of his most popular to date coming in the form of Mike Mago's track "The Show". Make sure you see what all the rave is about for yourself when you catch him at this years festival.

Du Tonc is another artist seeing support from The Magician, who once raved that he loved them and put them alongside the likes of Royksopp. Going on to say that they gave him goosebumps at first listen and that their "melodies are really deep, beautiful and melancholic." Other supporters include Digitalism, Tenstake, Aeroplane and Flight Faciliites, which is not too shabby for artists flying relatively under the radar. Matt Van Schie and Mighty Mouse together make up the disco-pop group Du Tonc. They first made waves with their single “Darkness” which put them on the map next to the disco fusion producers around the globe. If you’re looking for some good vibes while at the festival we suggest checking out the power duo.

opped off by two lead vocalists Marc Gilfry and Billy Scher, American Royalty brings a physc-rock sound unlike anything we've heard in recent years. With the backing of drummer Mat Ungson keeping the beat, this three piece unit does things that just flat out impress. It's hard to find a category to put them in, but if you ask the group, they'd like to keep it that way. They have almost created a genre of their own, blending garage with electronic and blues, meshing it all together somewhere in the middle. Originally from the Los Angeles, California area, AR has taken their talents east to Brooklyn where they have settled in and made it their permanent home. If you haven't had the opportunity to see their live performance, let's just say you are in for a treat at MIM, because their live shows have become something of lure over the past year. To describe it in one word; explosive! Pick up their most recent EP Prismatic and play catch up before you go get your face melted off.

And if you still haven't purchased your tickets head on over and grab them now. 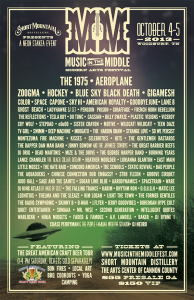