What more can be said about the rampantly ridiculous Swedish duo kown as Dada Life, other than their shit is bananas. From everyday champagne showers to random album release stunts (remember that girl who snagged a first listen by dressing up like a banana and running around New York?), their party-time-all-the-time attitude launched them to the forefront of electro/progressive house.

It seems like ages since I saw them open with “King Of Africa” for Tiesto’s 2009 appearance in San Francisco, and look how far we’ve evolved: twerking has become a worldwide phenomena! Even crazier, it doesn’t seem to be going away... In celebration of this jiggling, gyrating practice, Dada Life releases their remix of “Bubble Butt” originally by the Express Yourself creator, Diplo (Major Lazer). Feel free to twerk out and try to match tempo with the rapid-fire ping-ponging that will get your derriere quaking. Thanks Miley! 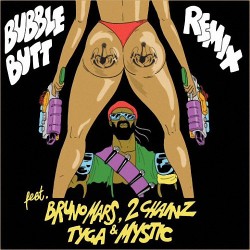