Our journey to Splash House, the new multi-venue pool party weekender in sunny Palm Springs, CA, started out like any other multi-day event: a long drive with friends, pump-up pregame jams, and the preliminary schedule review of the sets we wanted to catch (not that those plans ever work out the way you had in mind). The drive was pretty easy, outfitted with beautiful scenery, random bouts of caravanning, and even a random billboard for the XX's "new" album, Coexist, spotted in the middle of nowhere (wasn't really sure what to make of that). Before arriving to the hotels, we figured this event would be like any other liquor-sponsored pool party with a big lineup. Boy, were we wrong.

It may have been the fact that we knew many of the other attendees, or possibly the fact that we just got back from throwing down in the scorching heat of HARD Summer the previous weekend, but Splash House really set the bar for intimate summer parties. Despite the 100+ degree weather of Palm Springs, there wasn't a single worry on anybody's mind. From balcony to bar, pool to stage, people were jamming to the nu-disco tunes and tech house funk filling the hotels that weekend. 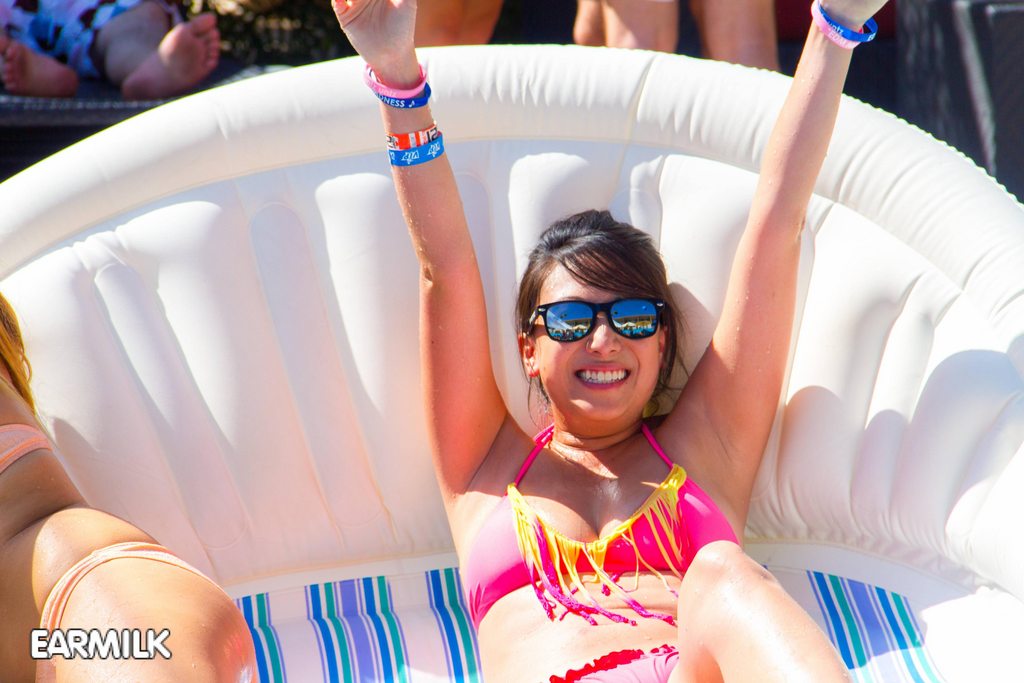 After check-in at The Saguaro, we grabbed the free shuttle to The Curve to catch the beginning of Eats Everything who was slated to play a two-hour set. There's something to be said about a guy who can DJ virtually non-stop for an entire week straight. After our discussion with him at HARD Summer, it became quite clear that Eats isn't your typical get-rich-quick career performer. No, this is a man who cares so deeply for what he does that he'd rather play for free than take another "wank job as a brick layer or recruitment consultant." DJing since 1992, Eats brings the type of set diversity that others' only dream of achieving. No single performance is the same and that's exactly why we stayed to catch his entire set, but I digress. 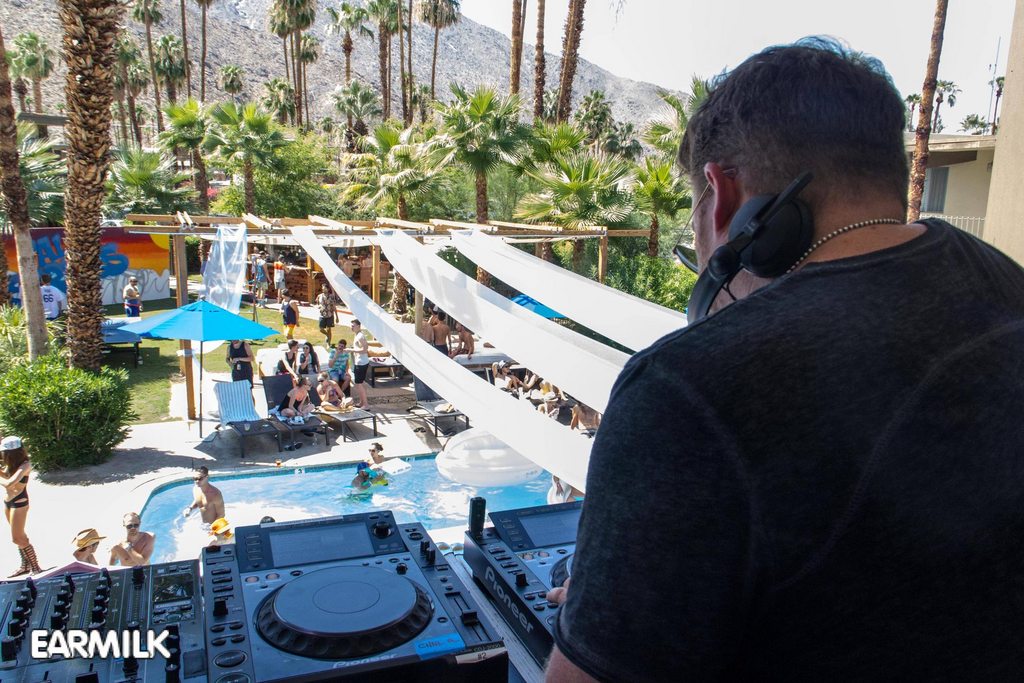 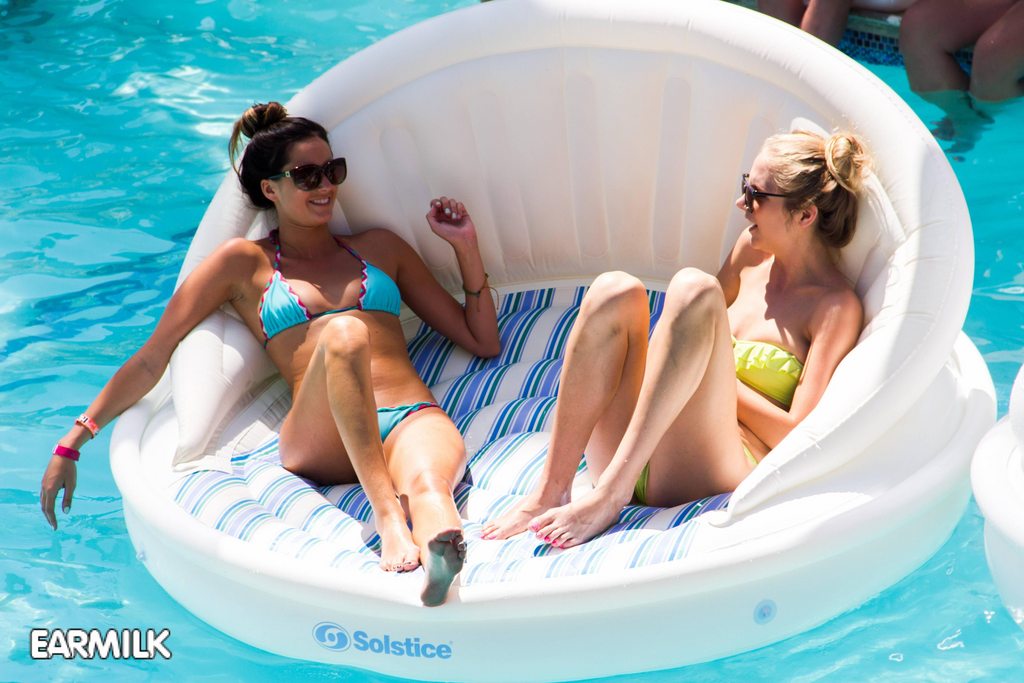 Upon arriving to Curve, sponsored by LED, we looked around cluelessly for a solid 15 seconds searching for where the music was coming from. Where was Eats?! Wait…you mean that dude standing behind three decks and a mixer on the second-floor balcony of that hotel room?? Interesting, to say the least. But what about the backstage/VIP/look-at-me-I'm-important section? You're trying to tell us it's the hotel room attached to the balcony-stage? Well, that actually sounds pretty legit.

So let's quickly recap: we have a Palm Springs hotel, a pool filled with raging mid-day drunks, and a DJ raining beats down from a second-floor hotel room. To think this would be just another lame pool party. Touché, Splash House…touché. It's safe to say this event was off to a great start. We chilled at Eats' set for a while, met some good people (some of whom, admittedly, knew more about the history of Earmilk than us), and shared some drinks from the communal VIP/hotel room stash before heading over to Pacific Festival's stage at Caliente Tropics to catch CLASSIXX. 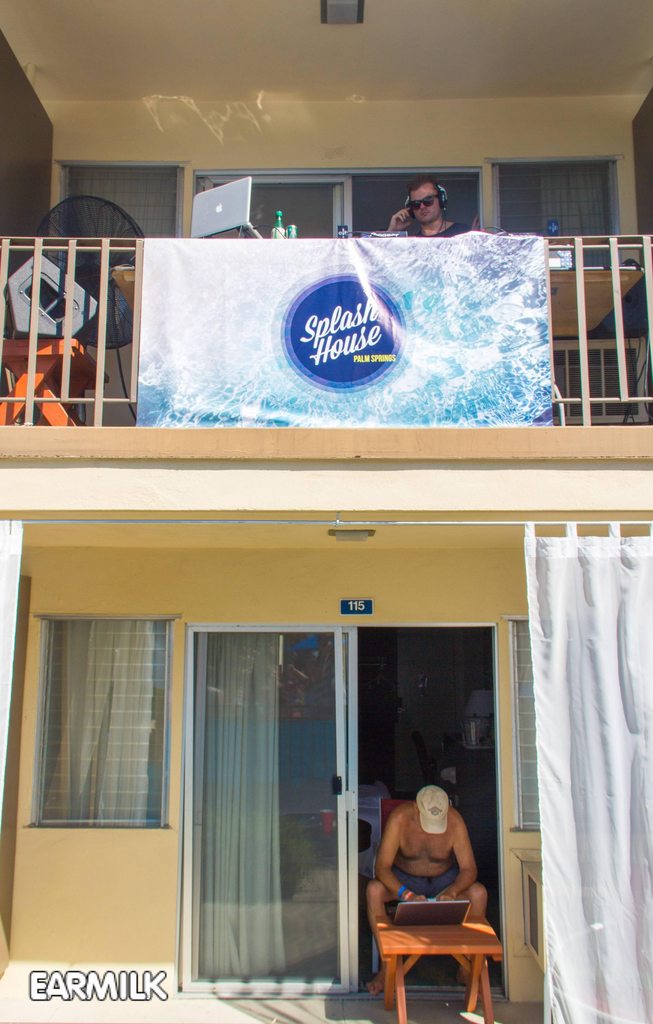 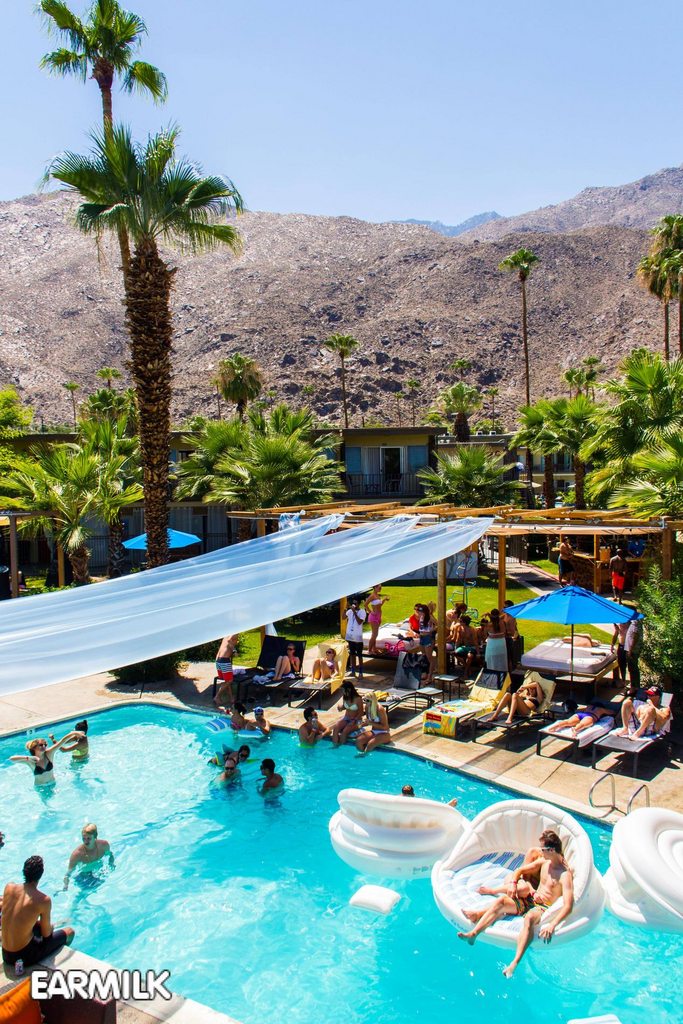 We got to the second hotel a little early and caught the tail end of Dirty Dave's set. While Eats was more deep/tech house, Dirty Dave provided those summer-y indie dance vibes. Where Curve was cozy and intimate, Caliente Tropics reciprocated with a much larger pool area and dedicated "dance floor" (quotations because, let's be honest, it was just a grassy pitch). This afforded attendees the option to either schmooze with friends by the water or dance their hearts out on the grass. Both were great and only served to further establish that this was truly a party fit for summer. 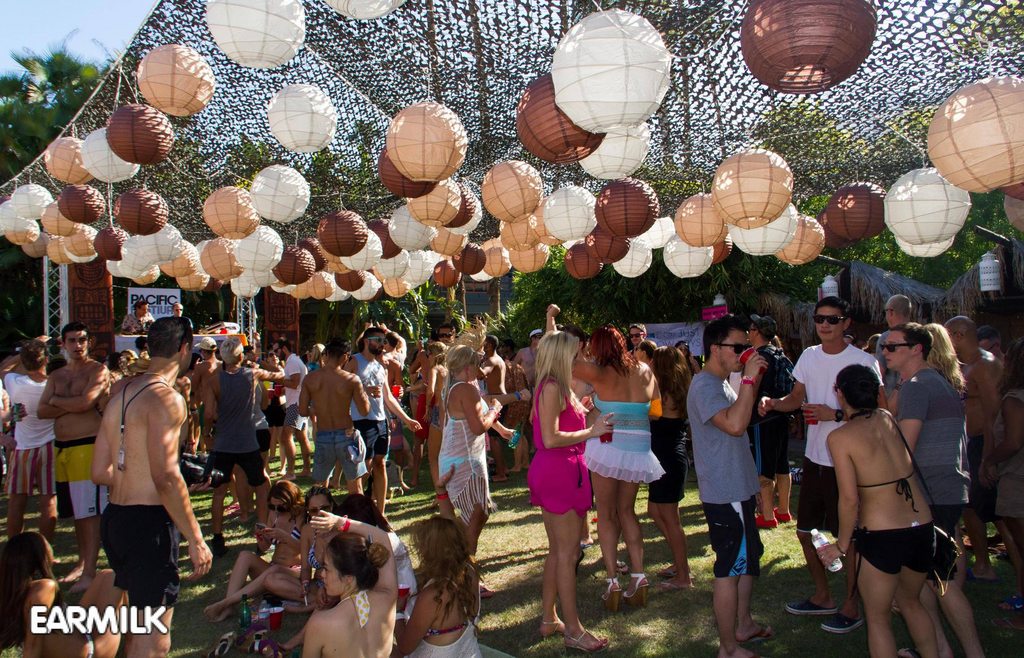 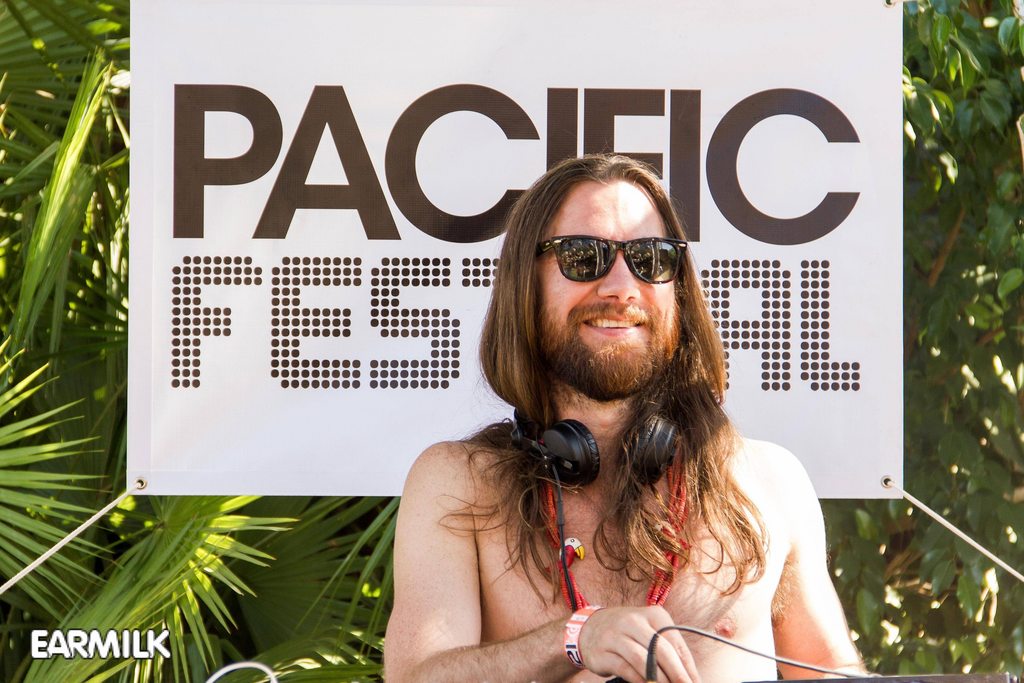 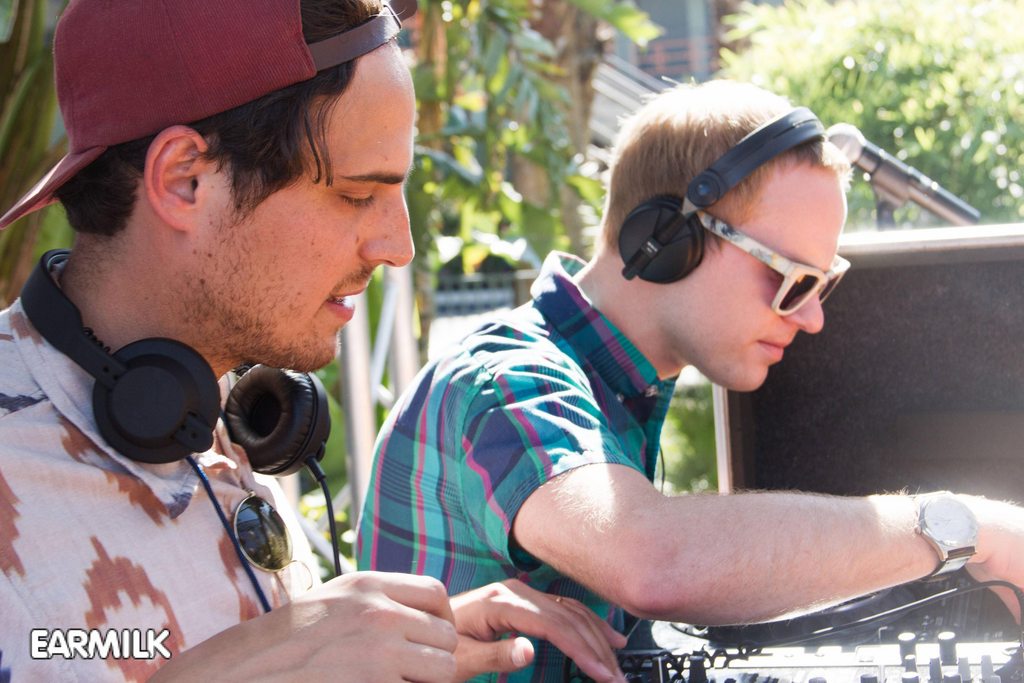 The VIP section of Tropics was essentially a beach house filled with hawaiian-themed artwork and comfortable couches. Not bad for a hotel pool. This was actually where we found out that Perrier partially sponsored the event, providing free bottles of their flavored sparkling water. To be honest, the last thing we needed under the hot desert sun was a mouth full of heavy carbonation. It's not exactly the most thirst-quenching mode of hydration, and the lack of free still water didn't really sit too well with us, but these are minor critiques of a generally fantastic weekend. Anyways, the hotel was dope and CLASSIXX played a great indie dance-inspired set. We didn't catch all of it because we wanted to see some of Bixel Boys before reaching our final destination: Bag Raiders. 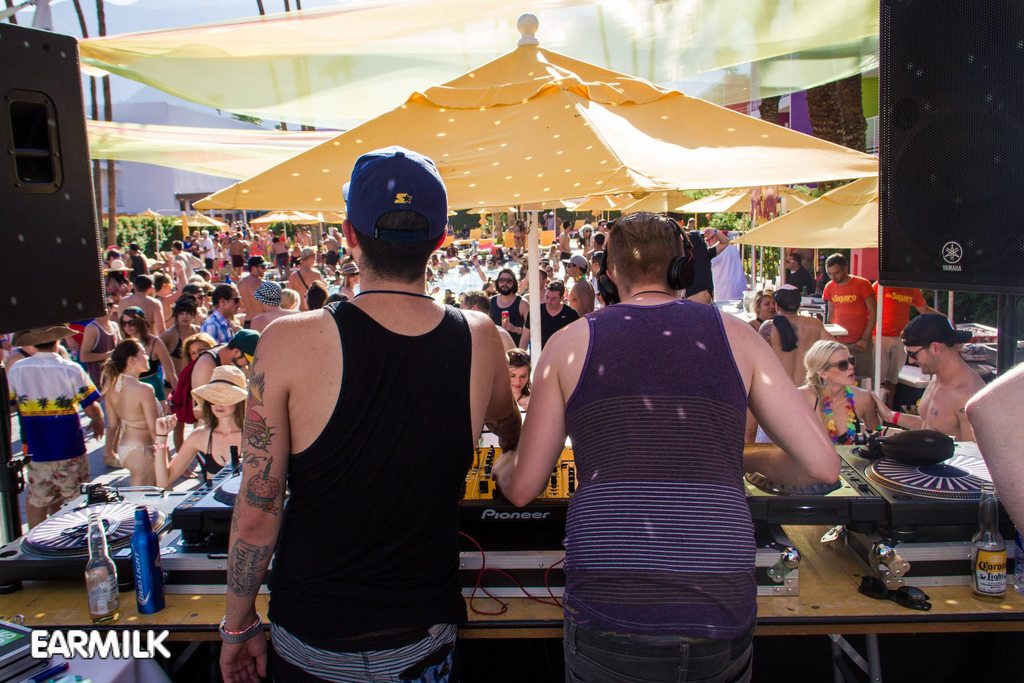 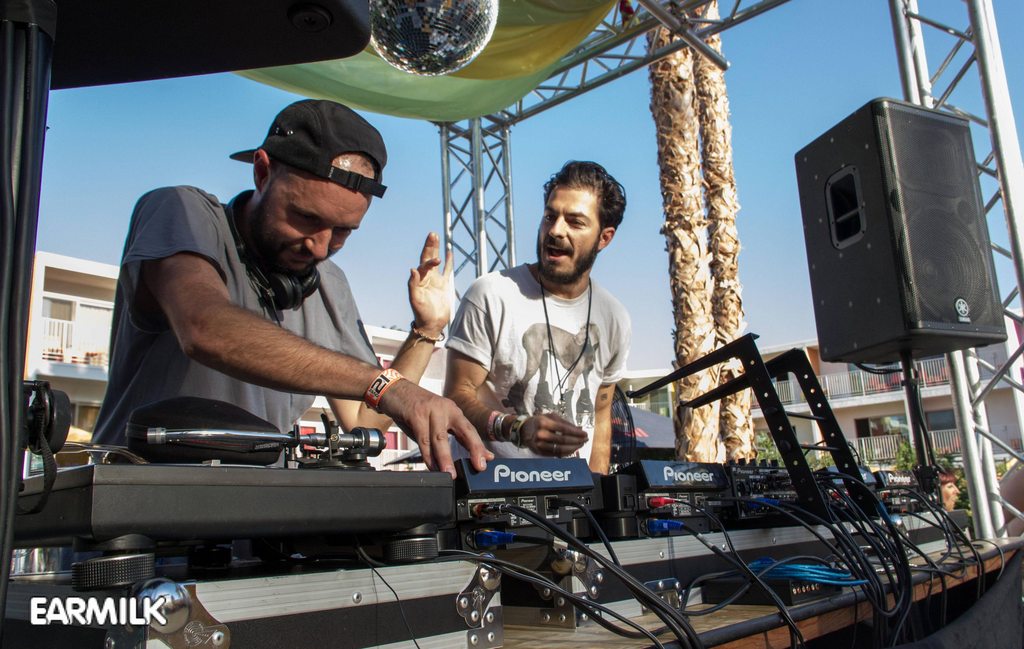 Luckily, our planned schedule allowed us to see a bit of each hotel and compare the overall atmospheres of each. The layout of The Saguaro, our third and final hotel, was very similar to that of Curve: centered pool surrounded by hotel rooms. It was, however, slightly bigger, allowing it to support the now-established "luxury" of a dedicated ground-floor stage. On our shuttle ride over to Saguaro, pleasant memories of the bus rides to HARD, Electric Zoo, and other distance-challenged events flashed in our minds. The eager festival goers that span a multitude of generations, the all-but-flagrant "stealthy" attempts at consuming [insert party supplement here], and the instant friendships emerging from the short-lived seating arrangements really put our musical society into perspective.

As cliché as it is to say that music brings us all together, but dance music is the only form of music that has lasted longer than a decade without drastically changing or transforming into something completely different. Why? There's no definitive answer, but it can't be just a fluke. It's the reason why something like a pool party in the middle of the California desert can go off without a hitch, or why people are willing to shell out thousands of dollars to party on a cruise ship for a weekend.

Bixel boys did a great job, and Bag Raiders put on an (obviously) amazing performance, but by the end of the weekend it became clear that Splash House was about more than just who was playing music. It was, in so many words, the natural progression of dance music events and venues. We look forward to more from the organizers, and sit here mystified as to what could possibly come next. 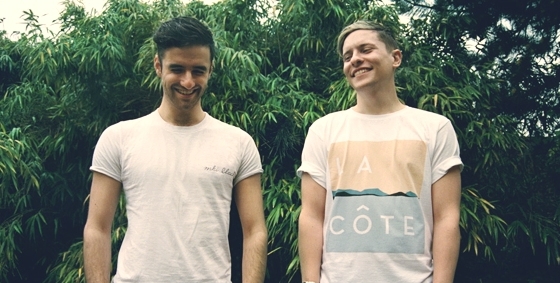 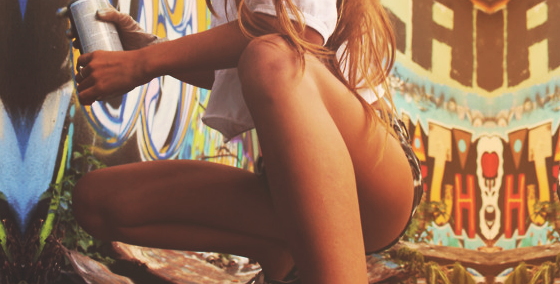