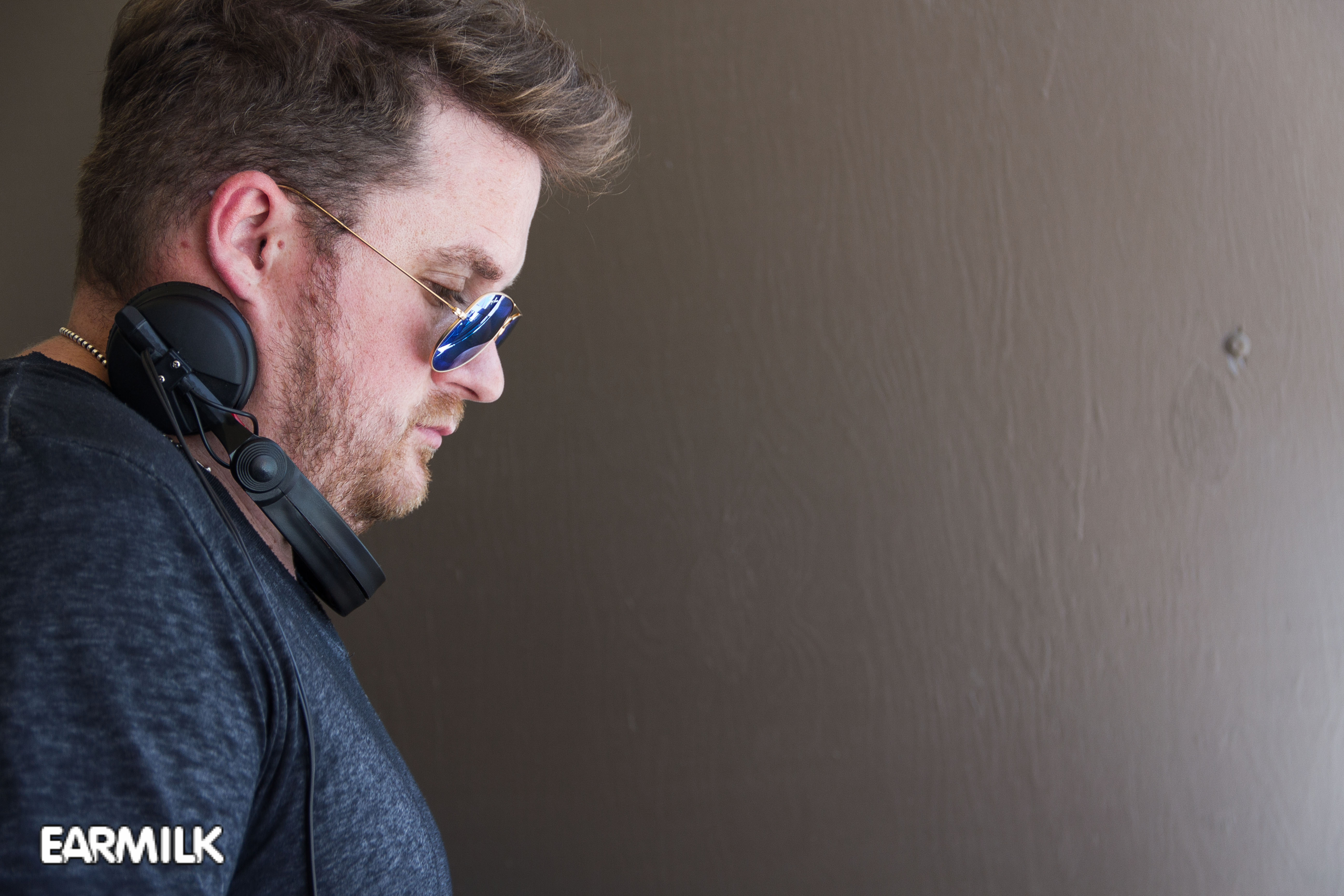 EARMILK had the wonderful opportunity to talk to one of the happiest DJ/producers in the game right now, Mr. Dan Pearce, AKA Eats Everything. He is member of the Dirtybird Players, who held their own stage at this year's HARD Summer Music Festival, and we sat down to discuss making it in the industry, the future of dance music, and his awesome work ethic.

EM: You just finished your set, it was amazing, we loved it. Dirtybird is the first U.S. label to have host a stage at HARD Summer. What do you think that means for the future of the label and dance music?

Eats Everything: Well, because it's underground music. Actually, well, it's not really that "underground" because at the end of the day, there's no such thing as underground anymore. If there was, labels like Crosstown Rebels and Culprit who think of themselves as underground wouldn't promote on Twitter or Facebook. If you promote yourself in any way, shape, or form, then that's not "underground". But I'm hopeful [for the future of music], because obviously dance music in the UK and Europe has always been massive. If you look back through the ages, rock & roll is still big with older people; disco became something in 1970, by 1980 it was dead; house music was invented late 70s early 80s and house music is still massive now 24 years later. There's no other style of music that has the kind of pull and following [that house music has]. Look at the EDM explosion in America, like Skrillex, who I think is a FUCKING absolute legend. I'm not a fan of his actual music, but I'm a fan of his talent because he's a fucking talented guy. Same with Dave Nada and the moombahton guys—they're lovely guys, it's not my kind of music, but they're talented and they're doing what they do. But for a style of music to be in the forefront of everything, I just can't see it disappearing. I've been going to rave clubs since 1994. This is the first style of music that has lasted for more than 10 years. Rock & roll has changed and changed and changed, but if you think about how Farley 'Jackmaster' Funk made "Love Can't Turn Around" in 1986 to now, there's loads of different styles of dance music but dance music as a whole—house, jungle, techno, whatever—is still a major part of peoples' lives and I can't see that ending. To be honest, I love my wife very much, but my first love is dance music.

EM: I heard you quit your job when you decided to pursue that first love. What was going through your mind at that time?

EE: I've been DJing since I was 12, that was 1992. I started playing clubs in 1996, playing old school hardcore, house, speed garage. That's all I ever wanted to do from the time I got my set of decks on the Christmas of 1992 from my mum. From that day, the only thing I ever wanted to do is that. I've had jobs. I've been a recruitment consultant, a brick layer, a builder, a ground worker, a carpenter, an engineer. I've done all these things and I hated it, it made me want to kill myself. When I turned 30, I said to my wife (she wasn't my wife at the time, but she is now), "I'm going to give up my job, I'm gonna go on the social security, and for one year I'm going to [dedicate my time to music]." If I don't do it in one year, I'll give it up and leave it as a hobby and go back to a proper job. Month 11, I made the "Catz 'n Dogz" remix and it was released July 2011 and now I'm here in L.A. having just played Richie Hawtin's night in Ibiza two nights ago.

EM: Amazing. Did you ever feel a time constraint or panic during those first eleven months?

EE: I don't want to sound like an arrogant twat, but I'm a pretty fucking good DJ who's been doing it for a long time, 21 years. If I wasn't a good DJ, then I should have given up a long time ago, but I always thought I was pretty good at it. Back in the late 90s you could just DJ, you didn't need to be a producer. It's kind of changed so I realized I had to start producing. But I'm a fucking lucky bastard; I get paid an extortionate amount of money, like sometimes I'm like [looks at pretend check in his hand] and think "are you honestly paying that?! Are you an idiot?!"

EE: I'd do this for free! I'm not joking, I'd come here and play for nothing. But they're willing to pay me a year's salary to come here.

EM: You've worked hard, though! 21 years and now you're here!

EE: Yeah, but it's still [crazy]. Hopefully, now that I'm a little bit older and more grounded—don't get me wrong, I'm a little bit of a diva now, like if I get a shitty hotel I'm like, "well, hold on..."—but it's what you're used to. I've just been on a plane for 13 hours from London, leaving mid-day to get here, landed at 3 o'clock LA time, immigration took an hour and ten minutes.

EE: This dude, right? They moved the queues around and we're waiting for this guy to open up his station. He's wiping his booth down, then he started playing with his stamps. He was there for 20 minutes just fucking about, moving his computer screen 3mm back. Anyways, so after an hour and a half I got through. I landed at 3:15, got here at 6:10, and played at 6:30! I'm not complaining, but it's not the easiest bit—it's hard work! Effectively, what's the time now?

EE: But that's normal, staying up this late is normal for me. See, at the end of the day, I am the luckiest guy on the planet to be doing the thing that I love most in the world. If you told me two years ago that I'd be doing an interview about my own tour with that American cunt Justin Martin for enough money to feed Africa for a year (money really isn't a factor, I'd come here for nothing), it is really quite mind blowing. I still have to pinch myself everyday that I get to do this. It's absolutely mental.

[*side note- For Eats, cunt is a term of endearment for this sailor-mouthed Bristolian.]

EM: Do you have any suggestions for those just starting out in the DJ/production game?

EE: There's three things, and learning them has really helped me. The first thing is to use every penny you earn on a good set of monitors/speakers. If you've got money and you want to be a producer, save as much as you can and get a legitimate set of monitors. Instead of saving and getting the best, I initially went out and bought shitty speakers, quickly learning that if I had saved I could have gotten here a lot quicker. I've got three studios now with the same set of speakers—Mackie HR824mk2. They're £1500 for a pair, but as soon as I got them the first record I made was "Hevvie" and the second was "Entrance Song". All of a sudden you can hear exactly what you're doing wrong!

EE: The second thing for me was to not get all desperate and put stuff out that's not ready. Quality over quantity. Don't put stuff out that you'll regret later on. I did it. I put some things out there that were wank, but luckily people sort of missed that.

EE: Go back! Look at the early release history and you'll laugh!

EE: The third thing is to go to as many things as you can and meet the people. I've received probably 15-20 messages a day on Facebook, SoundCloud, Twitter, etc saying, "Yo! Listen to my record!" ...no. I'm not going to listen to your record if you do that. If you say, "Hey there!" and give a full explanation of what you're doing, a streaming link (not a download link as it clogs hard drive space making it less appealing; sounds wankey but it's true), and give me a full spiel on who you are and how you got into it, then I'm more willing to pay attention. But if you come to a gig and you give me a USB stick or CD because we're in the "modern age", I will definitely listen to it. If it's good I'll tell you it's good; if it's shit I'll tell you it's shit. But you need to go to as many of these things as possible. Let's say you're a massive fan of Claude VonStroke and you want to be on Dirtybird, what I did was went to as many parties as I could that Claude was at and I gave him music. He didn't listen to any of it, but eventually somebody did and now I'm sitting here talking to you. It's sounds shit, but it's all about networking. I never thought I'd be the guy that was networking, but I've just played Enter (Richie Hawtin's night in Ibiza) twice and now Richie Hawtin is all over me. He thinks I'm amazing, booked me for BPM Festival, booked me for all these parties because I'm diverse and I don't just play one style. You need to get to these places and meet these people regardless of how intimidating you feel they are. You can be the most talented cunt on the planet putting out shit left right and center, but if you don't get it to the right people it doesn't matter.

EE: To summarize the three things: monitors, don't put stuff out until you really feel it's good, and make sure you go to as many parties as possible and meet as many people as possible. If you are good, then you will get noticed.

Eats Everything is currently in Europe, and will be performing at great events like The Warehouse Project. Certainly one of the funnest acts at Hard Summer this year, he is sure to be just as entertaining everywhere else.  He's also got some amazing things coming up, including an album in the works.