Arriving in San Francisco for the 11th show of their four-month Metamorphic tour, Tritonal's Chad Cisneros and Dave Reed exude a refreshing enthusiasm for world-famous artists.  The excitement of an upcoming sold out performance hung in the air, as our conversation quickly glossed over the weighty topics of current electronic gripe to passing comments about their stage props. After a short walk to Ruby Skye we slipped through the back entrance, walking by the graffiti signatures of Kaskade, Moguai, and Tritonal themselves, and leaving the Texas natives to prepare for what resulted in a high-energy ride welcomed by the Tritonian masses.

This tour celebrates the 3-part EP series, Metamorhpic, the second installment of which Cisneros and Reed finished mastering just weeks ago. However, to hold us off until the its release, the guys teamed up with longtime friend 7 Skies to produce "Reset", their official debut single off Dim Mak Records. With poignant synth melodies and dubby breaks, the track fits well into even the biggest of sets, proof of which can be seen in support from Hardwell, Gareth Emery, and Ferry Corsten. Buy it below and keep posted for Metamorphic 2. 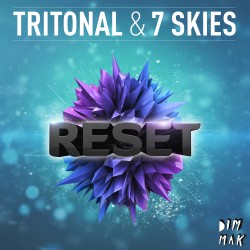