UK hip-hop seems to have more ups and downs than a roller-coaster, with current artists such as Mic Righteous at the forefront of a scene that has watched its popularity go through the roof with the exposure it has gained from sites such as SBTV. Rappers that come from the UK are often compared to some of the MCs that have come before them. The likes of Wiley, Kano and Dizzee Rascal come up as some of the pioneers in the UK urban music scene.

In fact, Dizzee Rascal has been making a few waves over in the USA, with his collaborations with long-term friend and hip-hop legend Bun B. So to make it in the current climate, the best thing you can do is make yourself original, which I feel is what ThisisDA (pronounced This is D. A.) has done with this track "Ragz 2 Riches".

Hailing from London, and currently residing in the South West of the UK, ThisisDA has churned up a hip-hop track that has all the makings of a summer hit. The beat, produced by Omito, has those classic sampled vibes with a soulful vocal sample on top of a smooth horn loop. The tempo is a bit faster than your average hip-hop track, but it matches the flow that D. A. spits over it. He skips over the beat with ease, whilst his lyrics carry the message of leading from the front and not being scared of getting knocked back.

Having already supported the likes of Tinchy Stryder on stage, and having his tracks played across a host of radio stations in the UK including BBC Introducing, it's looking likely that ThisisDA will soon be making a lot more waves in the coming months as his album Super Arkane is set drop sometime later this year. You can download "Ragz 2 Riches" and a whole host of more free music over at his Bandcamp and Soundcloud 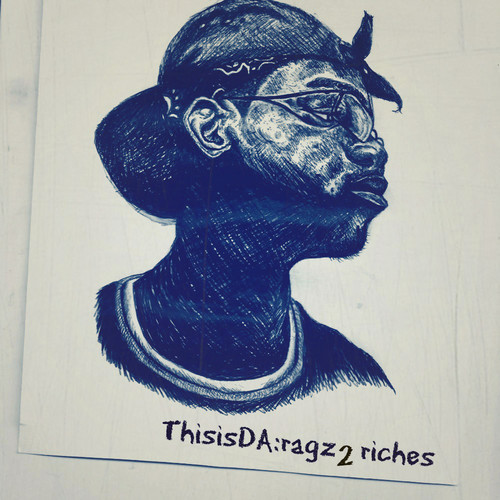