Karriem Riggins - "Round The Outside" [Video]

8 years ago by Ayara Pommells

Stones Throw’s drummer/ producer Karriem Riggins released his latest album, Alone Together this past October.  These strange but insanely dope visuals are for the second track off the album, "Round The Outside". The video combines indigenous American chic with smoke-filled Indian tents, Persian wall rugs, complete with dudes rockin’ sneakers, bussin’ awesome b-boy moves and kitted out in masks similar to those donned by SBTRKT. Sound like a lot of awesomeness going on? That’s because there is, but you should expect nothing less from directors Tuomas Vauhkonen and Jeremias Nieminen, who won Stones Throw’s Dilla themed video competition last year.

If you haven't already checked out Karriem's 34 track instrumental album, I implore you to do so. A work of musical wizardry. Karriem Riggin's music epitomizes the evolution of everything beautiful J Dilla contributed to production. 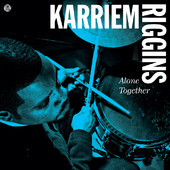