This post was written for us by Liar about his own upcoming LP release, Strange Love, out on the consistently impeccable Infinite Machine today. I'd recommend reading the album walkthrough as you play the album, this is a seriously deep read on the LP from the emotional perspective of the man behind the beats. 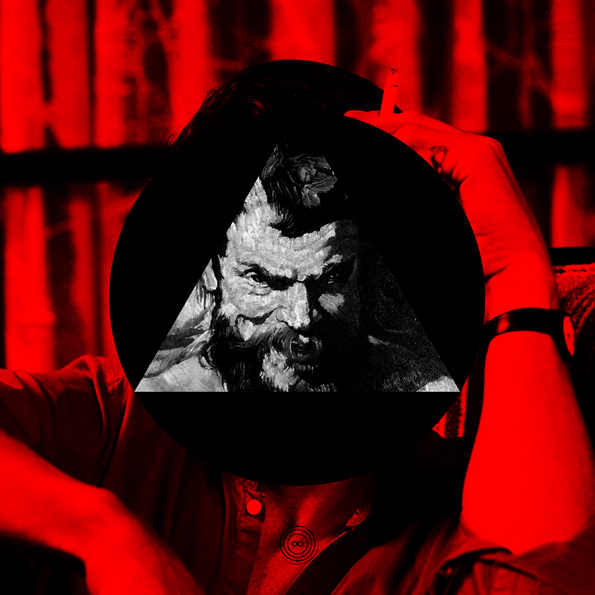 Strange Love came about as an album (or mini-album, if you're fussy about that kind of thing) seemingly of its own volition.

Last winter I made a couple of tracks that didn't really belong anywhere in terms of the releases I, or others, had planned... namely "Nymph Hunter" and "Fucktoy". Within them I explored the most lust-rooted extreme of my spectrum, but nothing really crystallized. Then, I came upon the good fortune of Infinite Machine discovering and signing both tracks sometime during midsummer 2012. We packed them up with the two “Giulia”s and I titled the resulting EP Strange Love, after having used this tag quite obsessively in the past 6 months or so.

Now, between that moment, and my mastering deadline, something quite unforeseen happened, that now makes total sense: life imitated art, and I fell in love with a nymphette from the sea. Said love blossomed, and subsequently withered at breakneck pace. It was, in many ways, stranger than anything I'd ever experienced, and exactly what I'd always wanted. In its wake I wrote about 8 or 9 tracks in less than a month in an effort to cauterize myself. 5 of those would go on to bring this album to its current running time.

Strange Love recursively inspired itself. I was just along for the ride.

Stream the album from Bandcamp:

One of the 3 songs that owe their existence to my time with the nymphette. One of myriad things we have in common is a predilection for downers... I made a little Paint doodle of one of my pills, dressed up as me, holding hands with one of her cute little pink pills, dressed up as her. She chimed "awww, Benzolovers!" That stuck with me, obviously. The song is about the quiet, peaceful, simple heaven we briefly had together. Hence the slow gait, the space, the 808isms, the massage of the bass. The song is also about the dissipation of said heaven before my eyes, hence the nod to a song from my youth that goes "all the drugs in this world won't save her from herself," hence the tense arp, hence that metallic rasp eating its way through the mix like my brain was cannibalizing itself in letting go of a fairytale. I like that.

Back in spring I wrote about it for a blog; "[Nymph Hunter is] sort of a love song with no singular aim. […] romanticizing myself as a satyr (or titular "nymph hunter"), [with] the entirety of nature [being] a bounty of nymphs. […] Beautiful monsters. They tease, they elude. I don't know whether to fuck them, or tear their little hearts out. […] And ultimately we're all mythical creatures trying to survive each other." Those words still stand today, with one thing I'd like to add - this track is probably the "poster child" for the "gothic" undertones that pervade the entire album, and I'd like to source those for you. No, it's not run-of-the-mill witch-housery. I really am that grandiose. It's not tongue-in-cheek, nor referential. It's sincere.

Sometime during the 48 hours during which I was slowly, steadily, unwittingly yet inevitably falling in love with my above-mentioned then-future-ex, me and her and handful of friends went for a night swim in the Black Sea. The moon was almost full, I recall, and basking everything in a blueish glow. We only had black, blue, and the white of the stars in our register. It was one of the purest, most sublime, most perfect moments of my life. As such, the track chronicling these events is just... happy. Playful. Regressive. A lot of cheesy old Romanian ballads, disco, and a-probably-very-recognizable vocal cut are sampled to that effect, and assembled onto the bones of a personal take on this budding new garage-house vibe that I'm quite into.

The track is about strange inclinations, about the lolita complex (and I use this delicious sample of “Lolita” as read by Jeremy Irons), about them ultimately being positive and informing a great degree of lovemaking proficiency. Production-wise, I wanted to instill a dizzying pace and rhythm to the beat, informed by a sound I subjectively imagine to lie somewhere in the space between Autechre and 2-step garage, in order to create a bed of confusion that would be resolved by the ecstasy of the equally poignant and lustful vox, culminating in the solely-intelligible “hold on to my pillow tight...” Because this will hurt.

This one is a straggler. Not part of the initial winter drafts, not part of the post-loveloss manic spree. A detached-but-glorious little number I wrote for a girl I had a huge crush on in spring... a girl who shared her first name with the historic Giulia Farnese, and also shared my enthusiasm for the TV show “The Borgias” that Farnese is a consistent feature of. So, naturally, I sampled a little bit of the opening theme of the show, and also tried to keep the overall nature of the song as “cardinal” and/or “papal” as possible (tee-hee), dipping back into the dubby, symphonic, techy headspace that I wrote my Undance EP in. The vox have been comically “misheard” by my entire circle of friends more times than I can count (the only English one being "part of me is pregnant," which I still have trouble unhearing most of the time). In fact, they go "why are we strangers?," which is a polite way of saying "why am I not inside you already?" I guess. Giulia spurned my advances, and after I took a little time out being butthurt, she became a genuine dear friend. A dear friend that I also vocally and openly sexually objectify (with requisite humor, of course). If that's not strange love, I don't know what is.

Arapaima is a hook genius, and is in peak form on this remix. He started it like I think all of the best remixes have to start – when you love a track, overall, but also hate discrete parts of it. In this case, he hated the off-beat placement of the vox accents, so he dragged them back, sped things up, injected copious amounts of laidback swag, and presented what is probably the only full-on banger on this LP.

This is the girl's, my strange-love-girl's nickname. “Dava” means heroin in Romanian slang. There could not be an apter nickname for someone. Never was a love more akin to opiate bliss, never was the aftermath of it more akin to opiate withdrawal. And I'm barely speaking in metaphors here, I actually physically somatized both the good and the bad. The track itself started off as a self-remix to “Night Swim”, with the intention to flip it, to document the sadness, where “Night Swim” had documented the happiness. It became so much more, to me at least. It's the fragile, beating heart of this release. The vox go "love hides in the strangest places," essentially spelling out the message of this LP, if there ever were to be a single one. Indeed, love does hide in the strangest places. And is only found when one isn't looking. That is the moral of this story.

Now, understandably, my state following Andreea's departure from my life was not all waxing poetic, melancholy and creative overdrive. There was also a lot of anger, resentment, bile. A lot of that was directed and disposed of into my Infinite Machine Anniversary freebie, "Poppy Love". But a lot of it tailed off slowly. All my dreams became revenge fantasies. In one notable one, I'm a detective, she's a drug-addled hooker, long story short I cave her little head a la that scene in “Drive”. So, naturally, I had to sample those very obvious (to some) references. Mamaia is literally Romania's Miami, and as such was the de facto environment for my dream. My murderous, one-sided, angry little dream.

The only track that's chronological. Last track written, album closer. Acceptance, emotional rejuvenation, and moving on, all rendered aurally. As with any healing enterprise, I conferred with the master shaman Borealis/Jesse Somfay, and got him on board. What was fun was that we both unintentionally aped each other in our contributions to the track, with every one of the early closed circle listeners thinking that I did his parts and he did mine. The goal, and hence end result, was unabashed steppy euphoria, going as far as sampling “S.O.A.P. Is In The Air”. The soul of the track, given my penchant for irony, is based on the time-warped, nostalgic memory of my first love ever. In other words, I end with a beginning. Or begin from an end. That sort of platitude.

love it! Creepy and slow and sexxxy.... purchased

It really is a brilliant album, left me speechless.