By almost every account, Halifax producer Ryan Hemsworth appears to be one of those oddities who is annoyingly talented at nearly everything he does. At once a pretty nifty blogger, writer and journalist (he has interviews with folks like Theophilus London, Nosaj Thing and Girl Talk under his belt), Hemsworth is more largely known for his music, which is also not so bad. It's like "#4-on-all-of-Bandcamp" not bad. At least that is what happened to his newest EP, Last Words, which was released late last month and gobbled up rather quickly by music-hungry ears.

Indeed, Hemsworth's musical career has hit several points of critical acclaim within the short span of a month — around the same time he graduated from university. He signed to WEDIDIT Collective, home to artists like Shlohmo, Ground Is Lava and RL Grime, before releasing Last Words. Taking it all in and taking it easy, we caught up with Hemsworth, who actually isn't annoying at all, in the wake of his newest musical career move.

EARMILK: Congrats on everything! Your album just dropped this week. How does it feel to have released your first label EP?

RYAN HEMSWORTH: It's crazy, just the fact that I'm working with everyone who I'm a fan of, like Shlohmo and Supreme Cuts and just the fact that they reached out and said they were fans of my stuff was kind of mind-blowing. [Last Words] is getting a great response and people are saying they love it. I've actually been searching for bad feedback but I haven't found anything which is great. I'm usually like not the most confident with anything I'm putting out — like the biggest thing that happened to me was the Grimes remix and that's what got a lot of people on my radar and remember I wasn't even sure if I wanted to upload it onto Soundcloud because I was like, "I think I like it but it might be kind of shitty?" but immediately it got a great response from a lot of people and then rapper Deniro Ferrar got on it and it's just snowballed from then. It's always a little bit of a worry since my stuff is not exactly a clear-cut genre and sometimes it feels like people may not take interest in it — it might last a day! So there's always that. It's not strictly dubstep or something.

EM: Well so far it doesn't look like you have to worry much though I'm sure some amount of caution is always good. You blend genres well; how did you get into all these types of music?

EM: Yes, it really does come together. I wanted to touch on another aspect about yourself. You're from Nova Scotia. EARMILK is heavily Canadian-based. What do you observe in terms of the electronic music scenes in those areas? Do you see overlap in the artist community?

RH: Definitely. Not so much in Halifax. It's similar to the way I'm in Ottawa now — there's not many distractions if you're into [electronic music]. When I'm in Ottawa, I just go to Montreal, I visit everyone I know there who are all pretty much making music. I can go to a million shows that are awesome that the East Coast wouldn't have and go back. And it's nice to go back and forth between those worlds. Each city sort of has their own style and has been influenced by all the different sounds and even though some people are doing different sounds, I kind of take elements from all of that. It's really inspiring especially when the TNGHT stuff is doing so well and [Hudson Mohawke and Lunice] are working with so many different crazy rappers. Everyone is working with everyone. We're not so divided by the regions. I know lots of people I'm friends with in Vancouver and I guess it's a little different than the hip hop scene where there are rivalries. We're all kind of nerdy.

EM: Who are some artists or what are some genres you listen to outside of the music you play?

RH: Right now, a lot of Chief Keef, the new Jeremih tape — a favorite from this year for sure — lots of Main Attrakionz. I'm always so happy when [Main Attrakionz] have something new. And a lot of what everyone is listening to: 2 Chainz, Future… I'm always searching for old video game soundtracks. I search through blogs mostly.

EM: What is the process of putting together a good mix? What type of head space do you have to get into?

RH: For starting new stuff, I find when I'm really stressed about something like school, I would start a new song and finish it in two hours. When my brain is in overdrive, I make stuff I'm happy with. It's just something I noticed, I don't know what it really means or anything. When I go into something, I really don't know where I'm headed with it unless there's a sample that's jumping out. I'm kind of just opening the program, dropping things in and letting it happen in whatever way. Obviously I'm doing the hard work of figuring out how it all goes together but there's an element of just going with it. It's a little like freestyle, you don't know what you're going to come up with. It's the surprising part, to not know what you're going to come up with. That's the part that is hard about throwing me into a specific genre. They're going to start with their drum track but when I open it up and make it 80 BPM or 120 BPM, it's going to be different.

If you've heard any of my mixes, when I play I'm using Ableton but everyone uses it for live shows now. So I drag all my stems from my own songs into that and then its kind of like going into my own stuff and remixes I've made and songs that I just like. And they can be whatever: friend's songs, whatever. So I might go from my track to a track to a new track for a live show, just from to make it different than an MP3, because it's a live show. It's more about taking my songs and other people's songs and throwing it all into the mix.

EM: What's the process of finding samples? And tying them all together?

RH: It's like, lately I've been building off of or have been building off of stuff I grew up on in high school. But it's all over the place. Whatever I'm listening to at the time, mostly. And I like going back to stuff to listen to them for nostalgia's sake. Video game soundtracks, indie rock, those are others I go through. It's about finding a way to bring it back, things I've liked in the past and bringing it back into the world. And everything is straight from my iTunes. I mean I'd say my "Recently Played" stuff is the next sample. (Laughs)

EM: Video games. That's interesting, since you did mention a lot of artists like you are nerdy. What games are you talking about specifically?

RH: Super Nintendo, they use the same kinds of synths that I use to like now. The nerdy RPGs like Crunchwrecker, they have sad melodies which I like to draw from. I take a lot of melancholy notes, whether it's Super Nintendo or it's stuff I would have gone out and bought like the CD as a 14-year old, but now I'm using it in my mix. Just kind of little snippets.

EM: What is the meaning behind "Last Words"?

RH: It's hard to come up with a good title. Sometimes it hits me instantly. This one, I don't know, there were a bunch of different things going on in my mind. You're finishing school, have to go into the real world, and if this one doesn't take off, I'm going to have to get a full-time job and it's kind of like when they say, "Do you have any last words?" This was to save me from getting any real world job. It was originally different artwork (skull with a griffin taking his leg off but it made more sense to use this. I like when titles have a bunch of little meanings for everyone. It's an abstract title but it can make sense to whoever.

EM: Tell us about the equipment you use.

RH: It's kind of unimpressive compared to what a lot of people use nowadays. I'm just in a program called Logic. I do everything in that, mixing mastering and recording. It's all been done within the laptop, I didn't record anything live. I just build up samples from other songs, or drum samples, and stuff, over the past months and years. I really like that because I can work on that anytime, anywhere, there's no real limitations with that. I think that's awesome that I can make whatever and it's going to be comparable to someone making a "Top 40" pop song, because we're all using the same equipment or same stuff. And it's all free, more or less. Some people are bummed by that but I think it's great, it creates more competition and makes us have to make something really weird.

EM: Good point. I have another equally important question. Are you really into cookies? (We are referring to his Yours Truly interview and Twitter)

RH: (Laughs) I'm definitely not against cookies, I've actually been making cookies lately. And not even weed cookies. Just like grandma chocolate chip cookies. It was kind of a joke in the beginning but it's funny because I have that on my Twitter bio and some rappers will be like, "Yo man, yo, I love those weed brownies and shit." But I'm just making chocolate chip brownies.

EM: You're also a writer. "A Half-Warmed Fish." Is this your own get up? How did you start it?

RH: Where I've found or a lot of gotten a lot of help from is the journalism world, knowing how to approach people and reach out to people and basically ask for stuff. Just over the past few years, when you're thrown into it, you have to call people up and ask people for things on the fly. It's the same as, "Can I remix your song?" It's kind of what I think a few people are missing out on nowadays, is just interacting with people — how to go about talking to people and asking for things, the favor system. That's definitely been the most helpful.

EM: As a journalist, I have to agree. So what's up next? We know you just finished your EP but are you working on anything else at the moment?

RH: I'm recording two new mixes but as far as official releases, not to much in the next few months. I've done a whole bunch of remixes which are going to drop randomly. And that will catch me by surprise — and everyone else. Also just random shows. It's exciting just to have this for promotion of the EP.

Stream Last Words here or better yet, buy a copy off WEDIDIT Collective's Bandcamp page and check out other releases from the collective. Time for cookies! 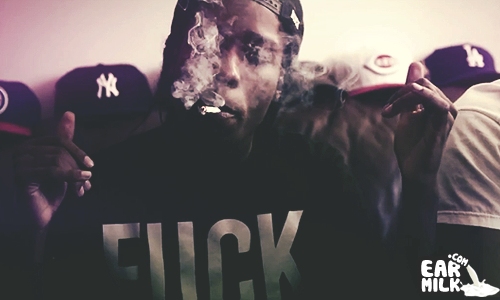