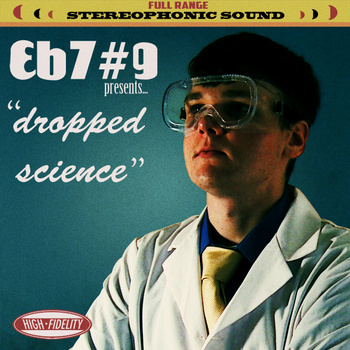 Drawing on the music of his Stones Throw and Brainfeeder heroes Madlib, Jonwayne and Flying Lotus among others, and bands such as Radiohead, Stereolab, and The Beatles as a source of inspiration, for Dropped Science Eb7#9  brings together a collection of synths, basslines and percussion to give beat loving enthusiasts a collection of seventeen replay-worthy instrumentals.

Not to be mistaken for a beat tape, Eb7#9's is fully realized lo-fi electronic hip-hop project which showcases the young beatmsith's keen attention to detail and ear for unique sounds. Made with the goal of striking a harmonious balance between "synth driven hip-hop" and non-hip-hop Eb7#9's is a textbook study in sample-based hip-hop production.

Where I think my album differs from other instrumental hip-hop efforts is in its attention to melody and harmony...My goal was to achieve a proper balance between the synth driven hip-hop that I love, but that is generally more texture conscious than anything else, and the chord changes and melodies of my non-hip-hop influences. - Eb7#9

Stream several tracks taken off the album above and follow the links to grab a digital copy of EB7#9's Dropped Science, which is available now for $7 via his Bandcamp page.