In near rapid succession several leaks from Childish Gamino's upcoming mixtape have found their way to the internet, the latest of which Gambino personally released via his Twitter account after wrapping up a lengthy cathartic rant. In His defense, when you're used to being a whipping boy for countless bloggers and hater alike you can't blame Gambino for leveling his sights at his critics and detractors and shooting back. If anything, the release of the new track was a fitting conclusion to Gambino's interesting and equally personal monologue.

While his Flynt Flossy and Yung Humma assisted-leak "Fuck Your Blog" and the collaborative track "Unnecessary" featuring ScHoolboy Q came off as brash in your face compositions, CG's latest cut "We Ain't Them" stands in rather marked contrast to those previous leaks. For "We Ain't Them" CG dials back the swag and braggadocio to deliver some straightforward conversational (and sometimes autobiographical) bars. The track offers a nice change of pace in comparison to the other  two relatively new Gambino tracks. Check out the track posted below and as always don't hesitate to share your thoughts on the music. 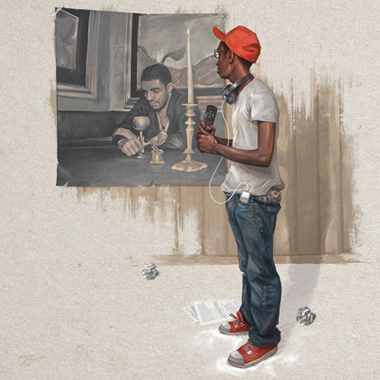 Childish Gambino is too sick. he's better than your favorite rapper.

that artwork is great

The rant's by Big Ghost, a hilarious hip hop blog, not CG. Check out more at http://bigghostnahmean.blogspot.co.uk/