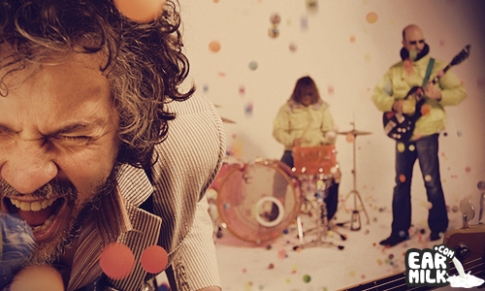 After you're done baking yourself into oblivion, make sure you wake up in time for 4/21, Record Store Day 2012. In time to get your paws on this: The Flaming Lips and Heady Fwends, a double album pressed on two high-quality, multi-color vinyl discs housed in separate custom art jackets and poly bagged together. What exactly is it? Well for starters, check out the tracklist as it might serve as some motivation to set an alarm for tomorrow morning. Frontman Wayne Coyne gives us a walkthrough the vinyl experience and talks a lot about blood.

"Supermoon Made Me Want To Pee" (featuring Prefuse 73)

"That Ain't My Trip" (featuring Jim James of My Morning Jacket)

"The First Time Ever I Saw Your Face" (featuring Erykah Badu)

"I Don't Want You To Die" (featuring Chris Martin of Coldplay)