If I didn’t have eyes, I would say that Action Bronson is a starving artist. After all, he raps mainly about food. And chicks. And hookers. And a peculiar combination of food and pussy. Nowhere is this more evident than on Action’s latest project, Blue Chips, a collaboration with fellow Queens musician Party Supplies. Blue Chips is a 17-track long, sample-heavy exposé of all things mentioned above. Action weaves back and forth between his muses, yet he never loses sight of what he’s about. He’s Peter Luger Jr., steak aficionado - whether that be bootylicious flank or lean marijroasted striploin.

Blue Chips kicks off with “Tan Leather,” three tracks deep. The beat is sample-driven (can somebody tell us the tune?), with piano that gets shrouded by horns and Action’s fevered delivery. He raps, “fuck the light at the end of the tunnel cause I’m living for today, trying not to drown in a bottle, death all around me, drugs seem to numb me, mental getting sicker, the devil’s gettin comfy.” Action appears to be condensing all his spilt milk into the first few bars, saying how he’s drinking and doing drugs all the while his rapping improves. I suppose "the devil" could be his music, seeing how it consumes so much; Action is no stranger to consumption.

Next in line is “Hookers At The Point,” an endearing ode to Cindy, a "hooker at the point" who’s “not herself unless she’s smoking crack..." "Seven times she got stabbed in the back by a regular John she dealt with many times before, that’s what she gets for being a whore though.” Action may begrudge the Ghostface comparison - he even says this on the project - yet you can see how his storytelling prowess is likened to the Wu God’s. “Hookers At The Point” is driven by the multiple perspectives of hookers Action has allegedly encountered. He channels their POVs over a repetitive sample and steely drums. “How you think I copped the Caddy, dummy, trying to get this Puff Daddy money, the name’s Silk but all my bitches call me Montell,” rhymes Action, imitating the whiny hooker for a comedic second verse.

Another standout record is “9-24-11”. Action gets up close and personal, but still spirals into culinary territory, blending the two together. “27 years I’ve never met an honest bitch,” he raps over a tender Dean Martin “Return To Me” sample. The beat then switches up and drops with just a minute left on the track, as Action hopscotches between talking about ‘basil on the boat’ and ‘hookers on the half shell’. The most revealing moment on the record though occurs during what you might call the second verse (there’s no chorus and Action stops and starts haphazardly), when he rhymes, “up in an alley with a fiend getting his cocked sucked, and she wearing a wedding dress, a special day, she says she finally met a man who takes her breath away, well naturally I’m jealous because I’m lonely, at times my only friends in life are drugs and a cannoli.” It’s sad because it's true.

Despite the melancholic tinges, Blue Chips concludes on a rather triumphant note. Take “103 And Roosy.” Action begins by declaring his current predicament, “medication in the plastic bag, I’m a man muthafucker, you’re a half a fag, my chest is hairy like the Cubans rocking silk in the 80’s on Miami Beach.” The beat is another sample - that, or a simple original loop - with more steely drums and touches of keys and horse samples. Action progresses from full-blown boasting to mental pornography, rhyming, “no disrespect I’m trying to eat the pussy, lift your legs over your head so I can taste the tushy,” then later on, “she’s known to keep a fresh shaven cat, milk chocolate and her eyes like the sun, keep a loaded .22 inside her thighs and her buns, her pussy lips are tight like the box of a nun.” When he’s not fantasizing about gourmet tastings, Action likes to blur the boundaries between female anatomy and gastrointestinal crack. He closes “103 And Roosy” with an enticing depiction of breakfast, “jalapeno cream cheese on the raisin bread, that’s for breakfast.”

For what it’s worth - nothing, Blue Chips is a free download - Action delivers (with this project) what is probably the closest representation of what it’s like to actually meet him, and see him perform. As is with his live shows, Action is so consumed by his art that he finds no fault in fucking up a line and restarting on records. After all, if life is art and life has its up and downs then it’s only natural to record everything, fuck-ups and all. What you see is what you get with Action. It’s refreshing. He’s a big dude of about 5’4” with a long ginger beard, who likes to wear ratty gym wear and make songs about his passions, food, pussy, and marijuana. Though after listening to the beat progressions and experimental interludes on Blue Chips, and the feature Action has in The Alchemist and Gangrene “Vodka & Ayahuasca” video, I wouldn’t be surprised if Peter Luger Jr. had begun to dabble in more ritualistic psychedelics. 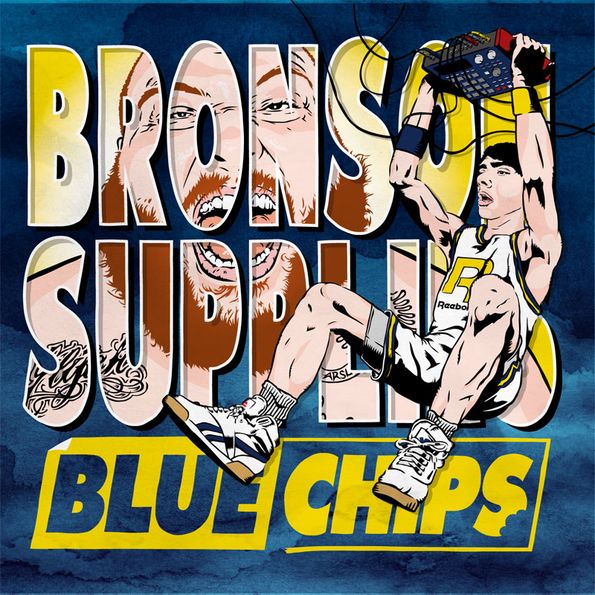