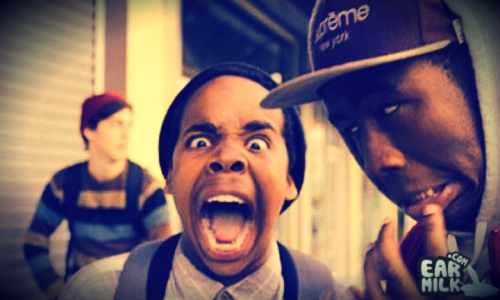 Last night hip hop's reigning court jesters Odd Future took over New York City by way of the Hammerstein Ballroom, in celebration of their latest release The OF Tape Vol. 2. What made last night special, though, was the return of Earl Sweatshirt, of "Free Earl" fame. Earl, who'd been AWOL for over two years (in a boarding school in Samoa), disappeared before the group's dramatic ascent to fame. Fans of the group no doubt recall countless rumors of confrontation and resentment between Earl's mother and Odd Future's "leader" Tyler the Creator concerning the release of Earl's music, and how the discovery of his location was met by discomfort and disapproval by Tyler and the rest of the Odd Future crew. It's relatively unclear when Earl returned from his samoan exile, or why he was sent away in the first place (though rumors of depression and drugs persist).

Over the last few months Earl sightings have been circulated around the Internet like the Patterson footage, the entire music community anxiously awaiting the re-assembly of the OFWGKTA posse. And now, the wait is over. Earl's flow has drawn comparisons to a young Nas - Tyler has gone so far as to call Earl Sweatshirt the best rapper he knows. His verses are thick and rich, using complex multi-syllable rhyming schemes and dark imagery. The moment where he emerges on stage is a powerful one, and watching him soak it all in makes watching all of these videos worth your time. Even if you aren't a fan, you have to give credence to the circumstances and the story here.

You can watch the performance from a  few different angles below, as well as download Earl's 2010 release, Earl.