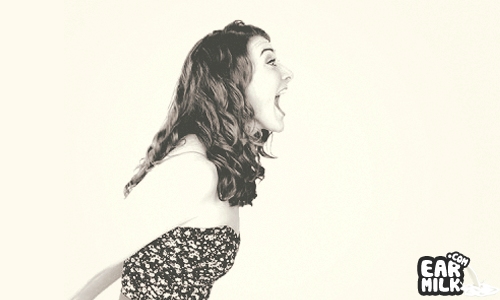 Amy Heidemann and Nick Noonan, the duo that composes Karmin, met while attending the Berklee School of Music in Boston, and released their first EP infused with all original songs in 2010. It wasn't until they decided to utilize the wonderful world of the internet that their fan-base grew exponentially. Their viewership shot through the roof when they began broadcasting cover songs in early 2011.  One of the covers that went viral (and you're probably familiar with it), was Chris Brown's "Look At Me Now". At Earmilk, we typically do not post YouTube videos within our articles, but we deemed their rendition of the track undeniably necessary to blog about last year.

Amy and Nick are engaged, making it clear their chemistry extends beyond the music they create. Their musical chemistry, however, landed them a record deal with Epic Records in June of 2011. Since then, they have been working behind the scenes on their highly anticipated album set to release in April of this year. Their debut album was recorded with the collaboration of Kane Beatz, Warryn Campbell, Diane Warren, Lil Doops, and The Underdogs. Beyond their work on the album, they have been continuing their exposure through mediums outside of the internet. Karmin performed on  Saturday Night Live just the other week.

The duo's newest single (off Karmin's upcoming debut album), "Broken Hearted", is not what you would expect from the title. The track undeniably falls into the "pop" genre and is likely going to sit well with a younger demographic. That said, electro house producer R3hab has turned the original into another pop banger. With a track like "Broken Hearted", this remix is likely to sit well with ladies than gents. It's got a progressive house feel to it, and will definitely make a good addition to any "getting ready to go out" playlists this weekend. R3hab has added a more invasive (invasive in a good way) energy to a track that will likely be played incessantly on Top 40 radio station's throughout the country.