Although Manhattan's Webster Hall brings a decent number of solid acts through New York City and I have to appreciate it for that, the place represents everything I hate about club life. From staff who are (understandably) annoyed and consequently do things like pretend your container of earplugs is a container of eardrugs to a $6 coat check (because hey, suck their dicks, what else are you going to do with your outerwear in a place this hectic?) to too-young boys who constantly require scolding because no, just because it's a butt doesn't mean it's socially acceptable or desirable to cop a feel, I'm just not someone who's well-cut-out for the standard club scene. It takes a good name to persuade me to knowingly clench my teeth and put up with these elements, but with Brodinski and Gesaffelstein making a stop on their Bromance Tour (associated with Brodinski's Bromance Records, and what a bromance they share) it was hard to say no.

Brodinski's personal productions and mixes cover an incredibly wide range, from slowed-down, chopped-up sounds under the Gucci Vump moniker to more conventional -- but nonetheless standout -- techno/electro/house, so it was difficult to predict what would happen when he and his partner-in-crime Gesaffelstein took the stage after Destructo. Naturally, the duo dropped their respective banger singles, but with a three-hour tag team time slot at their disposal, they were able to play a wide range of music, and it's also clear that they were having a ton of fun. These two are definitely at the forefront of the EDM scene, bringing to light a unique style that combines the elements of more minimal techno with elements of the often-scoffed-at "complextro" to create something that's agreeable for everyone.

For a Webster Hall crowd, the Bromance Tour drew a surprisingly reasonable audience, and it seemed like many of the people upstairs were actually there specifically to see the pair do their thing (although some people I talked to had no idea what was going on and had clearly just wandered into the room). It takes talent to be able to impress both of these audiences, the superfans and the random wanderers, but by the end of Brodinski and Gesaffelstein's set, the room had really filled up. Nonetheless, most people were thoughtful, and instead of being covered in sweat because everyone was crowded too close and you weren't sure how much of the sweat permeating your clothing was your own, everyone had their own space and was sweaty purely of their own doing.

The music blended seamlessly and the party going on onstage was certainly a motivator to keep the audience dancing for hours. There's something about this kind of dance music that makes people happy, despite periodic dark undertones, and sometimes that's what you need. By 3 am or so, this Boston girl could barely process what tracks were being played (being from a city where things die down by 1 or 2, no amount of coffee or whiskey could keep me fully lucid at that hour) but I definitely recall having a ton of fun and Bromance's beats kept my body alive even as my brain turned to mush. It's rare for a tag team DJ set to work so well together, but Brodinski and Gesaffelstein were meant to be. 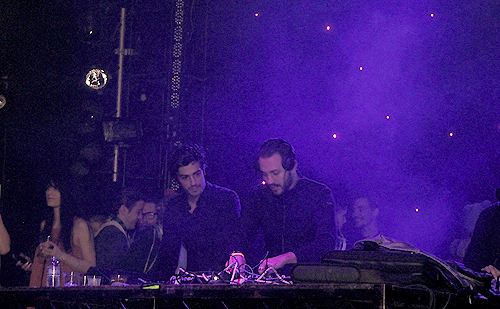