There is a famous quote from Mark Twain: "Too much of anything is bad, but too much good whiskey is barely enough". Now replace "good whiskey" with "Snowmine" and it is something we can barely get enough of. If you've been following our indie section, you should have noticed the frequent locality of this psychedelic quintet on Earmilk. They've made several appearances and Laminate Pet Animal rightfully earned a spot on our year end list as top #5. Get acquainted with the men of Snowmine through the interview below and perhaps it will inspire you to become their groupie.

Setting: Before their set, in the back hallway of Glasslands Gallery. The questions began as soon as we discovered there was no exit plan.

EARMILK: Since there are so many of you, can you guys introduce yourselves?

Jay Goodman: I'm Jay and I play bass.(last row to the left)

EM: Great! Tell me, the outcomes of 2011, what are your feelings towards the success?

GS: We've been pretty ecstatic about the whole situation. It's ironic we're playing here in January because our first show ever was here, last January. Our setlist is on the wall. We started playing the opener here a year ago, like the first opener.

EM: Do you remember who you opened for?

GS: I don't remember who we were playing with, not the whole bill, but I remember we were the very first and now we are headlining our first show here.

EM: That's really cool. Can I ask how did you guys form?

GS: Well, for the risk of being redundant in the past interviews, we met over the course of many years. Probably six years. We went to college together at NYU.

GS: Yeah, except for Austin who was a transplant of Washington D.C. He was in another touring band for 8 years and he was looking for something else so he came up here and we found him. We were all friends for a very long time and we came together in various projects with different names. Then we finally decided to get serious so we called it Snowmine and went with it.

EM: What was the weirdest description you guys have heard on Snowmine?

EM: That's the one on your Facebook page, yeah?

GS: Yeah! It's so awesome. I don't even know what that means but the idea of playing while Velociraptors are being fed a live cow outside, I think it's so cool.

EM: I was reading an interview before this and they asked why the album was named Laminate Pet Animal. You answered, "Try reading it backwards!".

GS: What did you find?

EM: It was the same! That kind of blew me away. How did you come up with it?

GS: Well, we work with a very close friend of ours, Jesse Corinella. He is a fantastic illustrator and he does all of our cover art. He's a very conceptual guy. Him and I really  talk closely on the approach of projects and how the art is going to resemble the meaning of the work we are creating. Whether it is a single or an album, he really wants to kind of embody it. We were talking about the collection of songs that ended up becoming the album, which we assembled over a long period of time. The songs are kind of melancholy , the album is relatively melancholy but there's always a silver lining, I think in our songs. There's always kind of an uplifting side. I'm not sure if you can feel it. The Laminate Pet Animal is described as sort of, the pet embodies a creature that you keep, something you hold dear to you. You can keep and save that pet forever past their lifetime but maybe in a darker way, which is the laminate part. It's kind of another form of taxidermy, I'd say. So he created this image of the fox, it's alive and dead, which is why you see a skull through the face of the fox. That's how it came out and completely worked.

EM: And this was all recorded in Bushwick?

GS: It was recorded partially in Bushwick and mostly at a studio in Williamsburg, called Headgear but we did a lot of overdubs in apartments and closets. Then we went to LA to mix it.

EM: You guys are working on something right now?

G: Yes, we're ready to go in after SXSW. That timetable will be a lot shorter. Probably two months.

EM: Can you tell us an album name or what you have planned for it?

GS: That hasn't even been talked about but we have basically the whole album written. It's all been demoed out. Right now, we have been looking for producers to work with and I think we found a guy. The next step is really conceptualizing how it's going to look as a whole. For our stuff, we like to use a lot of inter loops, connection between songs and outros and intros, etc. That's the most fun part. We like to sit around and generate sounds and build soundscapes, stuff like that.

EM: I noticed you guys like to play on Thursday nights. Why is that?

GS: It's kind of like vampire-ism. Is that even a word?

GS: You know how vampires die when the sun comes up? We die on Fridays, Saturdays

AM: And Sundays. I turn into a stone if we play a show on Saturday.

JG: He's more of a gargoyle.

GS: So really, we didn't meet in college but at a help group.

JG: For the record

GS: Yes, before you call House and get him to diagnose us.

CP: It's really too much of a coincidence.

JG: We can promise you in April, we will not have a Thursday show. But I can't promise you that.

EM: Why do you say April?

JG: Well in March, we're doing SXSW so we won't be doing much in New York then but April is looking good.

AB: But our next four shows are all on Thursdays.

JG: And our last two shows were all on Thursdays.

CP: We're going to play every Thursday in February, no joke.

JG: We had a show on a Friday, the loft show in Hoboken NJ. So far.

GS: If it's Thursday, it's Snowmine. That's our motto.

EM: I like it. So is there a vision when you guys hear your music? I know a lot of bloggers will tell you what they see but what do you guys see?

GS: A vision, like an abstract or a concrete object?

EM: Yeah, both. Anything.

GS: I guess overall,the macro image of our music, probably not. On a smaller scale, definitely. We put sounds, atmosphere and ambiance at a premium. We spend a considerable amount of time trying to emulate a certain sound and have that sound represent something for each song. There has been moments when we're trying to make the sound we're creating kind of emulate the lyrics being told so it's a story telling adventure. Other times, it's just the sound.

EM: Where do you get the tropical effects or the inspirations of  jungle beats from?

AB: Probably from Jazz and the different styles we listen to, afrobeat is one.

EM: Do you listen to a lot of afrobeat?

GS: Yeah, for sure. Do you listen to Fela at all? Fela Kuti, he's the man.

AM: He's the creator of that genre.

GS: I wouldn't call us an afrobeat band at all.

AM: I think it's just toying around with his rhythms and have that creep into our approach.

AB: Paul Simon too, that kind of stuff.

AB: I actually played in a South African band for awhile, before we came together with this.

GS: When we do blank slate kind of jams, where we just sit down and play, I think a lot of the lexicon drum knowledge that Alex pulls from has that influence in it.

EM: What was the weirdest instrument you guys have experimented with?

EM: From the "Curfews" video?

JG: The broom made it in but the mop didn't.

JG: That made it into the album, didn't it? The interlude?

GS: It's in "Danger in the Snow" and "Trial and Error"

AM: Basically, it was probably the craziest sound I ever created. Through a lamp. That was one of the funnest nights I've had recording just because of how ridiculous it was.

GS: We couldn't even play because we were laughing so hard.

AM: It was literally Jay playing the lamp, Grayson and I at my pedal board turning on effects and tweeking stuff.

JG: I couldn't hear what it sounded like at all. I was in a closet, a literal closet in the size of this and all I hear are cackles coming from the wall.

CP: Jay was like "Is that good? There's really not much going on in this room. It's still a lamp guys!".

GS: The other part is, there were three different bells from three different lamps. They were all kind of crappy lamps from IKEA so all three of them were slightly bent but they all had different tones because of it.It was pretty cool.

EM: So we should expect crazier sounds in the future?

GS: This next album will be. We'll have a lot more time on our hands and a lot more flexibility so we'll be trying to up ourselves.

AB: For the band or for the world?

EM: How about both?

GS: I think our biggest goal right now is making our LP, that's going to be a really great album. If we can do that in this calendar year, that would be a great success. Anything for than that is jumping on tour, finishing up the year supporting the record. And I also want to get rid of my lactose intolerance because it's really annoying.

EM: That could be for the world huh?

JG: The world will benefit from that.

GS: It bothered me the whole holiday.

EM: I know Ronnie has spoken to you guys before and a question from him is "What was the grossest thing you put in your mouth within the past 24 hours?"

CP: All I can think of are delicious things. I try to avoid gross things.

AB: So the least delicious thing? I had some pasta that I made last night and it was pretty average.

AM: That's not a good answer man. They're looking for something more.

CP: Well, my toothbrush is kind of gross but it has toothpaste on it, which cleans teeth so I'm going with that.

JG: I'm going with the radish in my salad. I didn't know it was a radish and I hate radishes.

AM: A nasty vitamin?

The interview ended with a discussion on different vitamins and how Alex is a "vita-ruin" from overdosing on vitamin gummies. As a reminder, Jay added  "we have a Pianos residency coming up in February. That's every Thursday, when we come out of our monster-dom, so we'll be playing every Thursday night at Pianos. We're having fantastic blogs coming to curate those nights. On the 2nd, it will be Exfm, the 9th is Wild Honey Pie, the 23rd is Pulp Lab and we're getting great bands to come out. It's going to be 4 bands every night, DJs to 3am and it's going to be THE show to see every week in February."  Remember to mark this on your calendars. 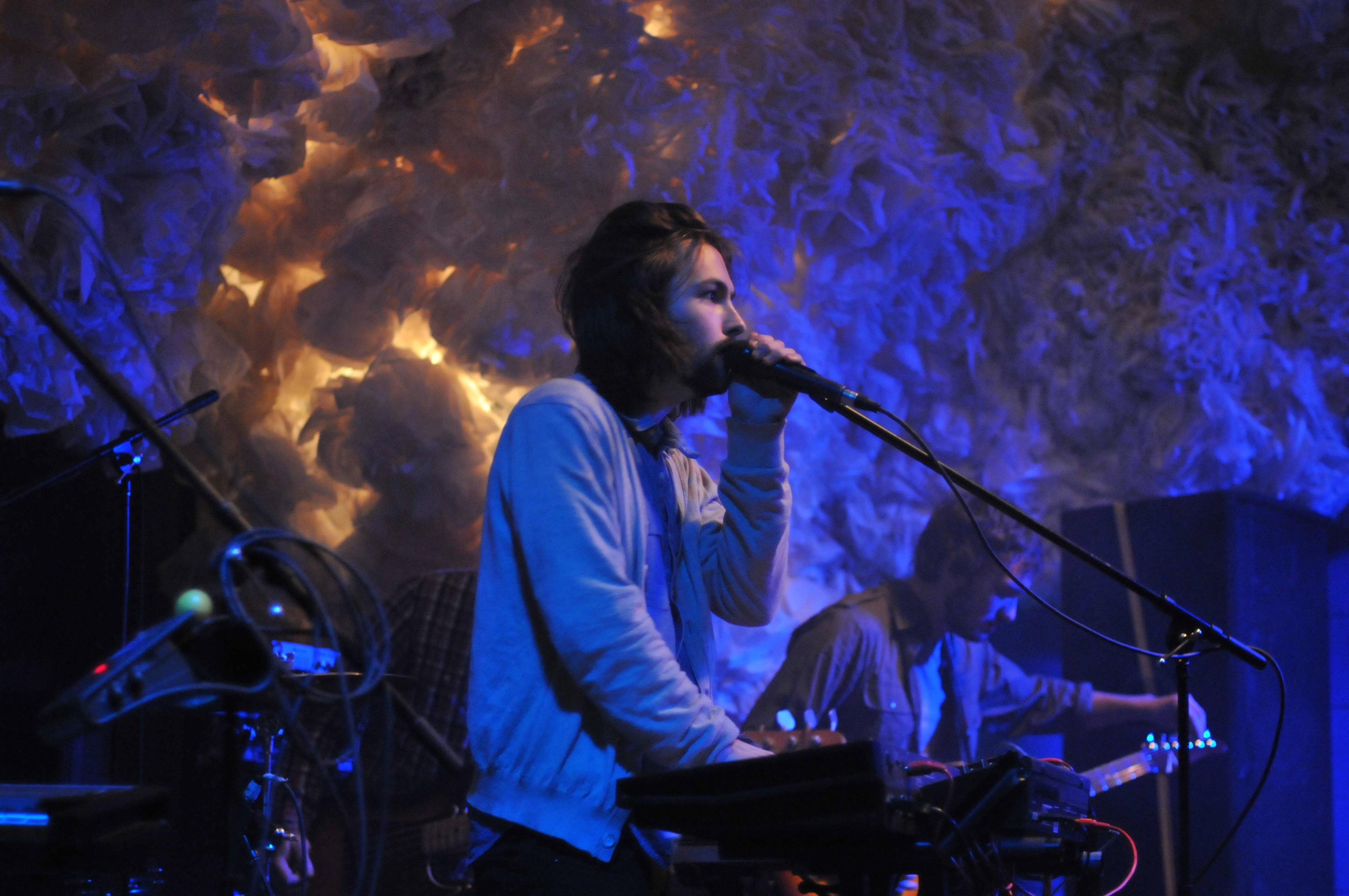