9 years ago by Alex Leonard 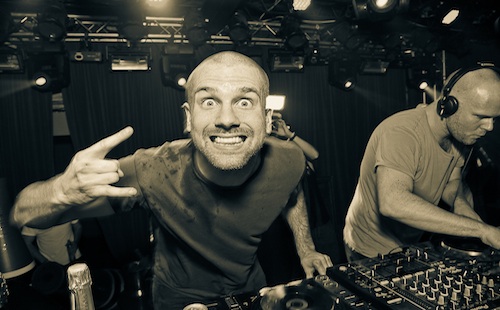 I managed to see Dada Life playing at London Music Hall last weekend. Dada Life is currently on So Much Dada records and produce electro house bangers. They've been labeled as "chaotic, lunatic, bananas" and many more titles to say a few. Read below to find out what they had to say about their music, being on tour, and 'how they like their eggs'.

EARMILK: Hey Olle and Stephan, it's good to have you guys here with Earmilk. First off, how would you guys describe your music?

Stephan: I would call it "High Energy Kiddie Pop."

EM: How did you guys come to the name "Dada Life"? What's the history behind that?

O: I think it's something you should live by, whatever it really means it's up to you to decide. It's really how to live your life - the "Dada Life." Don't think too much about it, just have fun.

EM: How did you guys really take off? What triggered your fame? EM: Do you guys like being at home or being on tour more?

EM: What's the craziest story you guys have from being on tour?

EM: What music are you guys currently listening to?

O: I agree, anything.

EM: So you guys just came out with this Happy Violence album with all the remixes, can you say anything about that?

O: Yeah, the instrumental for us was a lot of fun to make but we wanted to come in with a second punch so we made the vocal version. We then asked a lot of people that we knew to remix the vocal version. It just felt natural to build onto that track, it's always fun to take it in another direction.

EM: There's a series of remixes on the album, the Kaskade, Uppermost, Caverat, and Swanky Tunes. Which one do you like the most?

S: Well it's so hard to pick a favourite. All of those represent a style of music, sometimes you get remix packages that all sound the same so we tried to get a different vibe on each remix. We love them all (laughs).

EM: If you were to recommend a artist to anyone getting into the electro-house/pop scene which artist would you recommend?

O: It's hard to recommend any artist since any favourite artist is swayed; coming from track to track. I mean, when you listen and make music, you listen to it a different way. You won't listen to the album, you'll listen to each individual track. It's hard to recommend an artist for us because one month we'll love a track then the next month we're over it and we'll love a completely new track and so on and so on. That's why we love making music so much because you constantly have to be reinventing yourself and whatever you listen too all the time.

EM: What's your favourite song that you guys have made?

O: Always the latest one.

S: The ones that have been released we've listened to for so long, so it's really always the latest one.

EM: Well I guess that brings me into my next question, what's your least favourite one?

O: Probably the first one (laughs).

S: Definitely, one of the first tracks because you're always happy with the latest one and you're moving foward all the time.

EM: How do you guys like your eggs, scrambled, over easy, sunny side up?

S: Scrambled, definitely scrambled, I like them hard cooked.

EM: What percent of milk do you usually drink?

S: I don't drink milk, except for maybe a spoon in the coffee and then I don't care how fat it is.

O: What was it called? The Tasting Room? We ordered all of the appetizers twice. Why go for the main course when you can get the good stuff? It's like eating only the cream (laughs).

EM: So wrapping this up here, do you guys have a message for fans aspiring to become musicians or just anyone that listens to your music? Make sure you check out their recent Happy Violence Remix Album. I've posted my 2 favourite remixes of the 4 on the album and the vocal version below, all of which you can buy off iTunes.