RND.3 theduke's Mixtape Round Up

If you've been an avid follower of forward thinking house delicacies these past few months, then you know we're all hooked on that Bristol tip. With Julio Bashmore front and center BBC Radio 1 DJ Pete Tong has anointed him with the latest Essential Mix, and I have to say this one takes the cake for 2011. Opening with the catchy classic "Everybody Be Somebody" has me trolling this worm out of my head for the past week. Highlights go to Faith Evans "Love Like This Before" into Motor City Drum Ensemble and a highly anticipated SWAMP81 leak courtesy of Joy O. Comes in two parts, here's half I'm sure you can dig the rest.

Toronto beat cuisiner is back to bring you those grubby Thanksgiving leftovers because we all know they taste even better the second time around.  The fourth installment to his Cooked Up mixtape series showcases his latest churnings amidst a fluid selection of artful throwbacks that have yet to see a release date. Look out for Prince Club's new single "Olivia", the Weeknd on the closer, and my favourite transition into his latest hit "Searching" out now on DubNoir Music. A tape graced with perfect timing as he is about to embark on yet another European tour with fellow beat cook Meech. Mark the dates below as you munch on over an hour of deep house bliss, cooked up and ready to serve. 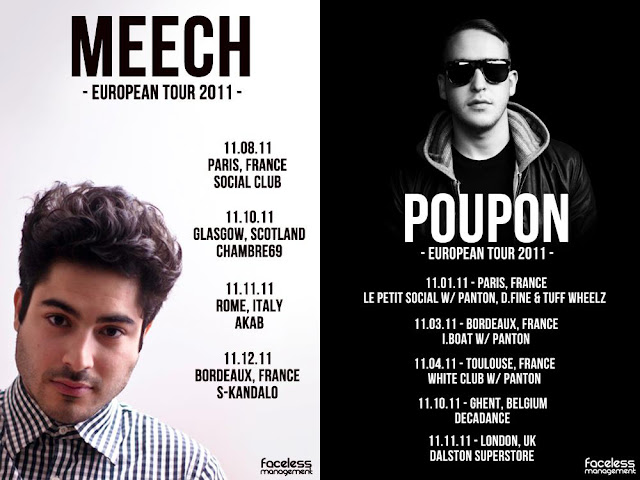 No those weren't magic mushrooms on your late night pizza, that soundcloud player is actually 296 minutes long. It's a 5 hour bootleg of Turbo Recordings intern Bordello and Thomas Von Party's set at Montreal after hours hotspot Silverdoor. A freak of nature - not for the weak hearted. There's over 50 tracks to stomach in this beast. But with all the new Turbo hidden inside it's hard not to press play even if you don't have half the day to kill.

Our newest addition to the EM cream team, longstanding Canadian jockey Gold N' Grams put out yet another tape to summarize what goes on in the heads of today's trend setters. Grab this one solely on variety, bouncing between lovesick drum grooves and 303 mash. It's all about tracklist here with fresh Futureboogie signings and past Hotflush gems. Keep an eye out as he flaunts his impeccable taste on the blogging stage.

After a recent move to Berlin, Dubsided A&R Neoteric is setting his sights on a healthier European music scene kicking off with a promo mix prior to his gig at London's legendary club Fabric. A snap shot of this tastemaker's current preferences, perk your ears up for John Roman's remix of an upcoming Laidback Luke and Gina Turner collab along with one of his Reclusion singles booming from under the covers. You can snatch the tracklist plus an interview with the man behind the mix here and be sure to show some of that mother land hospitality as he begins to rack up more dates all over Europe.