The atmospheric but still groovy sounds of Ryan Davis have recently been assembled into his second EP for Traum Schallplatten of Germany. entitled the Light and Shadow EP.  Ryan Davis released the five-track EP Routes of Life last year for Traum to generally positive reviews, and again with Light and Shadow he establishes himself as one of the moodier recording artists on the label's roster.  Ryan's sound is concurrent with the clicks and pops Traum has become known for, but the melodic sequencing of his material gives his tracks a more North American/UK feel that has been superimposed on the more industrial sounds of German dance music.  The production quality here is extremely high, as with most of Traum's releases. 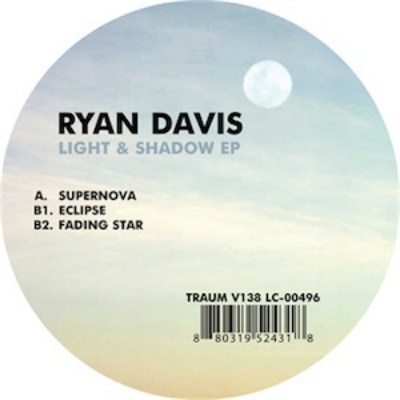 The 12" release contains three of Ryan Davis' original tracks, while the digital format also includes remixes by Microtrauma, Max Rieger, and Groj. My favourite track on the release is actually the shortest; "Fading Star," clocking in at just 4:23, takes the listener on a journey through a series of meta-physical experiences via sound, painting fresh and vibrant colours that breathe life into the fluidity of the release as a whole piece as opposed to a few tracks that were thrown together for a record.  Microtrauma, relative newcomers on the Traum catalog, win my choice for the best remix on the EP.  Microtrauma's sound is noticeably more industrious and club-friendly when compared with that of Davis, but their take on "Supernova" brings complementary diversity to the dominating Davis sound.  We will likely see more high quality stuff from Traum and Davis in the coming months.

You can buy the Light and Shadow EP at the following online retailers: