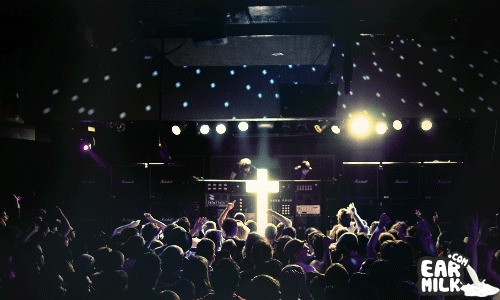 For a long time, I sort of cursed Justice. They were at the pinacle of this (at the time) huge movement which set into motion a wave of dirty walking bass lines that gave everyone a thirst for more distortion, more heat, more angst. We saw it peak a some time ago and now most electro has moved into the (sometimes banal) noise trash or into dubstep - but well, we don't need to discuss *step here - this is about Electro.

Shed a tear for the boom & bust of electro, but as so many of us will always people hold the past in highest regard - the return of Justice just might mark the end of that wave they helped set into motion. And hopefully the reboot of an otherwise creatively dwindling sub-genre.

No Fake? (below) has done up one of the most "real" remixes of Civilization that I've heard. That isn't a simple edit or a muddled dubstep remix

Man I feel like justice is being tried too harshly - it's only 1 song. But I do resent that a lot of electro has turned into noisy regurgitations of pitbull songs >.<

also no SS this week?

that waters of nazareth release party is what got me into this shindig. DJ funk is so nasty

brings a whole new meaning to "oh shit the drop"

Hey dude electroblake, I thought you knew 'bout the bootleg remix posted in ur recent suicide sundays..?! It sounds way more like a remix than the 'no fake' one... http://www.youtube.com/watch?v=yIUzflOXRgc

i thought it sounded a lot like the steve aoki remix that was just dropped
http://www.youtube.com/watch?v=oHg5SJYRHA0