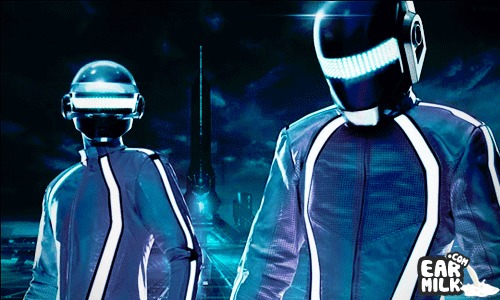 It was in the trailer - now its extended to 90s for your ipod.

Daft Punk have come a long way since Electroma and unless you really don't care about yourself I'm sure you've heard that Daft Punk are doing the Tron: Legacy Soundtrack - although it seems you'll have to wait a little longer.

CoS and a select other few outlets out there are reporting that the Daft Punk Tron Legacy Soundtrack is being pushed back to Dec. 7th

I recently saw The Social Network and although it felt like a re-enactment of Bill Gate's Antitrust (in much more literal and licensed terms ) the Trent Reznor soundtrack added enough for me to stay in the theatre contrary to what the major press might be trying to convince you of.

Tron on the other hand - will be perfect.

ahhhh. yes! tron by itself would be alright, but tron PLUS daft punk = stiffy

Pardon me sir, but is your Capslock is stuck?