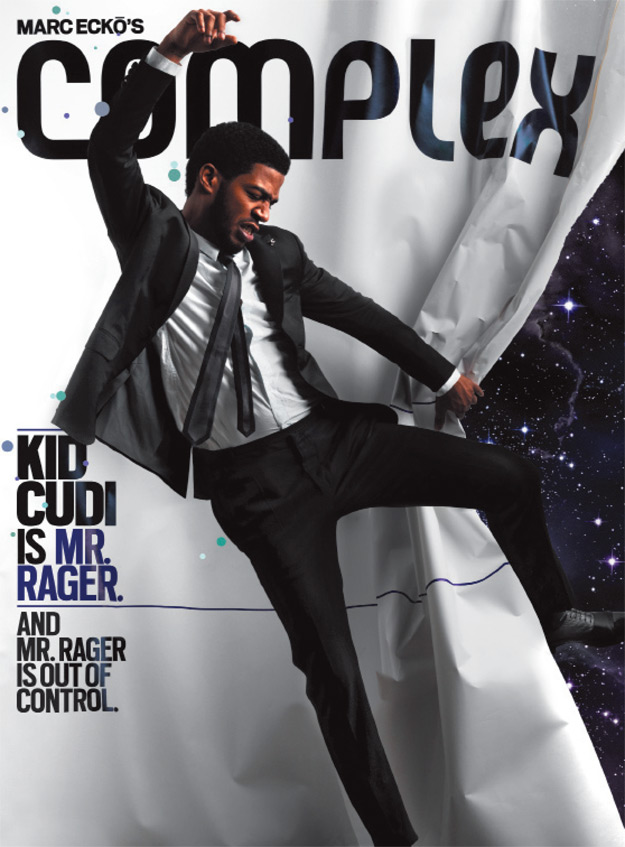 On this Friday afternoon we are blessed with a great interview Complex had with Kid Cudi for their October/November Issue. In the interview Cudi talks about Wale, Lady Gaga, Drugs and becoming a father. Got to say cudi let loose allot info in this on, you can read the whole interview here. Check It Out And Enjoy!!! On His Drug Use:

On His Upcoming Album:

Kid Cudi: It's explicit, but smart explicit. I'm not holding back. I have no regard for what people consider right or wrong. Some things I follow--like the law, from here on out. But other than that, I'm doing whatever the fuck I want to do. I'm not holding back. That's why I've been so excited about this move to L.A., because I just want to keep growing creatively, all over, as a human being.

On his music being compared to everyone's else & Wale:

Did you see that Wale interview that he just did, comparing us to sports? Let me clear this up: I'm incomparable to anybody. I don't care how people take that. No one can compete with me. I'm unfuckwittable; no one can knock me off my shit. I'm an unstoppable force, I'm a bullet. My trajectory is to the sky. Niggas got to do something really spectacular to fuck with me and my realm, and niggas be so bitter that you hear it in their voice.

On his baby daughter that nobody knew about:

Complex: That's a lot to go through.

Kid Cudi: There's another thing people don't know. I have a daughter, born March 26th of this year. Her name is Vada, and she's fucking awesome. That was eating me up, and it was stressing me out that nobody knew about her. I was trying to escape from that, too. Just trying to figure it out and make everyone happy, it's a lot for somebody my age to handle. I was manning up and dealing with it in what I thought was the right way, but it was the wrong way. I want to be around for her. I can honestly say she was the wake-up call. The reality that it's bigger than just you now--you have a responsibility and there's no more time for mistakes. It's time to stop fucking around.
That's intense.

Kid Cudi: I was scared as fuck. I need to be a dad now, and I'm not with the girl--how does that work? Because having money isn't it. I just wanted to be a great dad, and I didn't think I was capable. Then I thought: When she gets here it's either nut up or shut up. She's my best friend and she doesn't even know it. That's why I always told myself I'm going to make these songs for my kids, so they can follow along and know my story, if something was ever to happen to me. No matter what motherfuckers are saying or haters are putting in their ear. She can put on my records and be like, "Fuck all that other shit, my dad was like this." But I might make sure she doesn't listen to this album until she's 40. [Laughs.] I'm excited about watching her grow, I'm excited to be a papa.