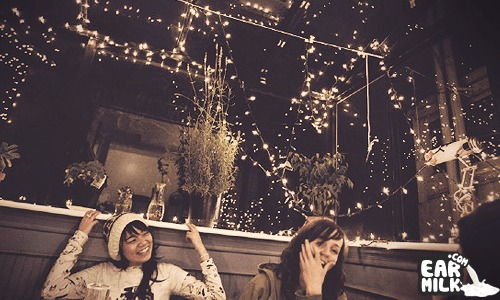 Oh Thao.. where have you been all my life. A couple days when talking about Neon Indian, I may have mentioned he was my favorite new artist so far through 2009 and would possibly continue into 2010.. well that was true, until this morning. Portland based Thao Nguyen with the Get Down Stay Down is literally like a breath of fresh air, their vibrant melodies mixed with their playful lyrics makes you think of a more innocent time of snowball fights and sleepovers.

What makes me mad though.. is that I'm just now finding out about them, sooner better then never I guess especially with their upcoming album about to be released, which is due to come out October 13th and entitled Know Better Learn Faster. The album actually features apperances from Andrew Bird, Laura Veirs, members of Blitzen Trapper and Horse Feathers just to name a few.

This is the first track thats been released from their upcoming album, the track itself is coincidentally called " Know Better Learn Faster." The track features my boy Andrew Bird who graces it with his fiddling abilities and his mean whistling skills. Thao and the gang are actually in mid-tour right now, so I included the rest of the tour dates for you below, along with the cover art of the upcoming album, the tracklist and of course.. songs, songs, songs! I included some tracks off her previous albums We Brave Bee Sings and All and Like the Linen(when they were Portland Cello Project). So of course.. check it out, tell me what you think and enjoy:

P.S. Thao if you read this, I want to drink coffee with you and make snow angels, so get back to me on that. xoxo

12 But What of the Strangers