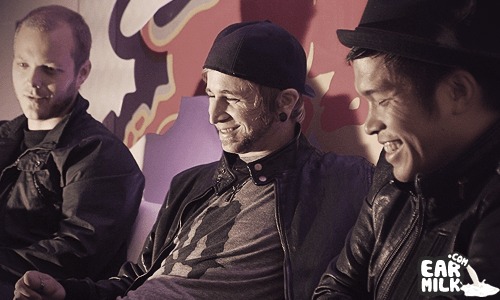 Maaaaaaaan. I love The Glitch Mob. These dudes are just constantly, constantly, constantly sick. I can honestly say, I don't think they have ever put anything bad out. Ever. Every time I listen to their music I get hyped. Everyone does, I don't think people can help it. Anyways, they recently went all renegade status and decided to show up to a few different places in San Francisco, set up a table, and jam. People started coming from all around to see them, and they blew them all away. They play at an Apple store, than Amoeba Music, a skate park, all over. They just dominate. They did it all for XLR8R, which is also a great underground tunes mag I'm sure you are all aware of.

If you aren't aware of who Glitch Mob is, it's the straight crunkest bunch of music masters this side of oblivion; their sets of the dirtiest, stickiest, nastiest, most insane bass licks make dancers' brains explode. edIT, Ooah, Kraddy and Boreta make up The Glitch Mob. Defying all categorization and forcing writers to make up new words, the Glitch Mob rejects traditional instrumentation and instead relies on robotic bleeps, mechanical clicks and scratches, erroneously produced noises never found in nature and an army of bass, often overlaid with gritty and organic rap lyrics. Straight up, shit is mean. Just watch the video, listen to some of the tunes, and enjoy it.