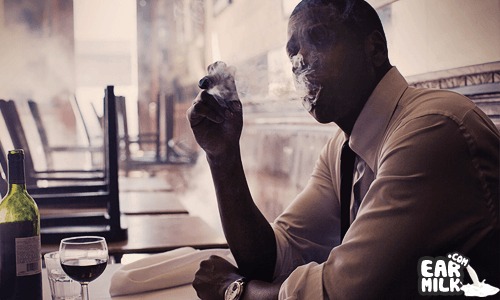 So with Jay-Z about to drop his what.. 11th album now, there's been a lot of hype and concerns about how Blueprint 3 will turn out. With all the recent BP3 track leaks there's been tons of mixed feelings and reviews.. from my perspective, with everything thats been in circulation so far, theres yet to be that "instant classic", which has pretty much been the trend with almost every Hov album. Don't get me wrong, the majority of the leaks all have been beyond dope, but at the same time theres been a few that have been "lack luster".. either way, excited for the final product.

Here is 4 of the newest leaks from the album, all 4 of the tracks were produced by Kanye West. Blueprint 3 drops September 11th, the album features tons of artists.. Drake, Kanye West, Kid Cudi, J. Cole, Pharrell, among more. Also included a Rhapsody ad they just did recently, which takes a look at all of Jay's past album covers. Check out the all the tracks, album cover, track listing and video after the jump..

01. What We Talkin' About (Feat. Luke Steele of EotS) (Produced By Kanye West and No I.D.)

06. Real As It Gets (Feat. Young Jeezy) (Produced By The Incredibles)

08. Off That (Feat. Drake) (Produced By Timbaland)

10. Venus vs. Mars (Produced By Timbaland)

14. So Ambitious (Feat. Pharrell) (Produced By The Neptunes)

Jay-Z has teamed up with Rhapsody® and MTV to promote the highly-anticipated release of his new album, "The Blueprint 3." As part of the partnership, the entire album will be available for fans to listen to for free on Rhapsody.com and from MTV's "The Leak", almost two weeks prior to its official release. In addition, Rhapsody will also make the new album available for purchase beginning September 8, three days ahead of the street release, and will include two exclusive bonus tracks.

Leading this partnership, three new Rhapsody TV spots will debut starting on September 1 across MTV Networks. In addition to two 30-second ads, Rhapsody will premiere a 60-second version of the ad in the 2009 MTV Video Music Awards on September 13.

I hope that alicia keys track gets big. I love her voice in that hook.

lacluster" why the quote? im feelin and rocking this shitttt

ya.. sorry wolphy the mooks contacted us, made us take them down

I hope that alicia keys track gets big. I love her voice in that hook.

lacluster" why the quote? im feelin and rocking this shitttt

ya.. sorry wolphy the mooks contacted us, made us take them down