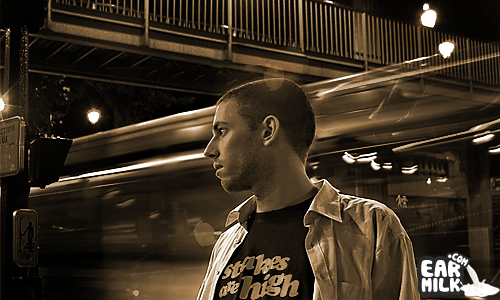 So, I got a chance to interview Dela. Dela is a french hip-hop producer that has really come up in the hip-hop scene with his jazzy beats that remind you of A Tribe Called Quest. It was a real pleasure to get to speak with Dela and ask him some questions on my and everyone's mind. Check it out below:

Interview with producer Dela by earmilk Order Changes Of Atmosphere from Fat Beats (US)

Order Changes Of Atmosphere from Amazon.com

M: Alright thanks a lot for joining me man...One of the first things i wanted to ask you is..where did you come up with the name Dela?

Dela: Actually it was A Tribe Called Quest song called "Luck of Lucien" and Tip had this line where he says "Creme de la creme" and I was just looking for a french expression that you could understand in English so that my name would be understood like everywhere. And So i went by "creme de la creme" for a while..like a few months or something like that..then i dropped the first creme and went by "de la creme" then i dropped the other "creme" and just went by "Dela". It wasn't a real name at first...it was just for my email and internet forums. But it just stuck.

M: Oh ok man so it was "creme de la creme".  That makes sense. That's definitely an expression we understand over here in the states. So man is music your only passion?

M: Alright man i can respect that. So pretty much you focus on music but anything creative you can dig. So we all know A Tribe Called Quest is one of your major influences because they pretty much influence everybody that is doing anything good right now. But who else would you say is a major influence on your musical style.

Dela: Well influences...i would say Pete Rock, Spinna, Large Pro, Jay-Z, Premier..everybody from that golden era. RZA of course. My first influence when i first got into hip-hop was Wu-Tang. You can't really hear it in my music but RZA was one of my first influences. All these people were a great influence for me.

M: Yeah man thats pretty good your right..based of listening to your music I wouldn't of necessarily chosen Wu-Tang as an influence but i can definitely kinda see it now if i think about it. I can definitely hear some Pete Rock and some Premier in your beats and of course A Tribe Called Quest. But how much of an influence would you say J Dilla has on your beats?

Dela: Well i don't think i could say specifically that Jay Dee influenced me in like Drums or Bass or Snares. Its more like an overall vibe. All these guys like Pete Rock, Premier and Large pro..i used to listen to them so much..i still do and you get certain automatism and you just get the vibe..their vibe and you just take it and make it yours. Its just an overall vibe and not something precise.

M:Ok I could definitely see that. You couldn't necessarily pick out where J Dilla fits in but i can definitely get the vibe from your music..the J Dilla Vibe. I know Changes of Atmosphere just dropped the beginning of this year but do you have any future projects coming up?

Dela: I'm currently working on several projects. I can't really tell much about it now because i'm at the first stage. I'm working on something that's probably going to be an instrumental album with just a few features. I don't really want to get into another album with 14..15 features because its too much work and it takes too much time to get everybody to send their files and everything. I might do another album like that later but for now i just want to chill for a little bit. So i'm doing this instrumental album and doing another album that's going to be all jazz like live instruments. I'm doing another album with a friend..a friend who is french...a French MC so its going to be more for the french market. So it's going to be more for the french market but who knows..you might like it even if you don't understand french. I got alot of projects..like 5 or 6. I dont really know yet what's going to really happen. I'm just working alot and making alot of beats and then we'll see.

M:Alright man that's what's up. I don't know much french but i'm sure i'm going to dig the album regardless because i dig your beats. And i'm definitely excited about this Jazz instrumental album you're talking about. Some of the listeners may be unfamiliar but could you them a little bit about the Beat Fanatic Collective?

Dela: Beat Fanatic...my man Slop..back in 2002 or something like that. I was on the undergroundhiphopy'all to be apart of it". Its like a big crew..we haven't done anything ever but its more liek this guy Slop he just switches out to every producer he likes and asks them to be part of Beat fanatic so its a big collective. And hopefully we can make an album sometime or something like that. forum's and this guy Slop told me to "get at me" and said he wanted to start a family..like a sound family..that's going to be called "Beat Fanatic" and "I want

M:Alright man hopefully you guys put something out together because you got some really good producers involved in that. Specifically producers that reside all over...and where do you currently reside and do you plan on moving to America or moving to LA or something like that?

Dela:I live in Montreal now. The good thing is i'm close to New York and all that. I would love to move to America but the problem is always the Visa and Green card and all that. Its a headache. I'm in Canada right now and i don't know where i'm going to be next year but we'll see.

M:Alright hopefully you can move to America. That would be good. Let me get to this question right here. You've done alot of work with some really good MC's including Elzhi, Blu, Termanology, Talib Kweli...I was wondering if you could tell maybe a good experience you had with one of these artists or if you plan on doing any work with them in the future?

Dela: Well we did like 90% of the album over the internet. Like sending files. I would send the instrumentals and they would send the track back with the vocals. Most of the time it was like getting up and checking your mailbox and there you go you have a new track with Blu or Kweli or J-Live in your mailbox. It's a great feeling because I haven't been disappointed. Not once. So every time it was a great feeling. Its like Christmasevery time. We did a few songs in the studio in France but most of the time we did this over the internet. Even though we made some of the MC's like Large Pro or J-Live we made them in Paris but then we prefered to do it over the internet because we knew the MC's would have more time to write or more time to do it properly and take the time to record. That was a choice. morning

M:Ok. So what does an MC need in order for you want to work with them in the first place?

Dela:I'd say an MC needs to have..the first thing is a good flow..something original. Of course they got to have lyrics..too many MC's nowadays don't talk about nothing. You either got MC's who talk about nothing or MC's that tell you that OTHER MC's dont talk about nothing but they don't say anything else. So i'd say lyrics..flow of course..originality. That's about it.

Dela: Well you know..alot of people think that Paris is a jazz capital and that people listen to alot of jazz and that there is Jazz in the street and all that. And its absolutely not true. Alot of people in Paris in France..they listen to pop french music from the 80's. That's what you find most of the time when you go digging..looking for records. It's very rare that you would find some really good jazz unless you go to a jazz record store or something. So just to say its not particularly a jazz city. There is no real big jazz or soul culture. But if you dig hard enough and if you look hard enough you can find some. its definitely not what people think it is.

M:Ok yeah that's pretty interesting cause when i think of Paris i think they are just playing hip jazz music in the streets all the time. but you gotta go looking for it...that's cool. So let me ask you this last question. What music have you currently been listening to..what have you been listening to recently?

Dela: That's a tough question. I listen to everything. To alot of things. Alot of jazz...some Robert Glasper, some Double Barrel.. Marco Polo & Torae, T-pain, some D'angelo. So many things. I dont really havent a current rotation list or something. I'll throw in anything i feel like listening...that's it.

M: Ok. So you listening to some T-Pain to. That's what's up. Alright man. Dela i really appreciate you joining me..you are one of my favorite producers right now. So i'm glad you sat down with me for a little bit and answered some of my questions. For all the listeners..if you want to pick up his last album..Changes of Atmosphere..we got the link to Phatbeats and Amazon.com where you can pick up the album. Pretty much every track on it is really hot. Alright thanks for joining me.