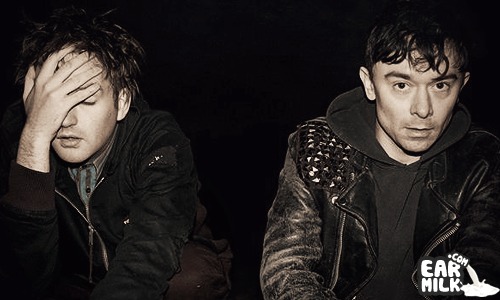 So, we've already covered the new single Dominos from the London, UK Duo The Big Pink but I upon some further inspection, we need some indepth analysis here.

The Big Pink are, Robbie Furze & Milo Cordell. Currently recording their debut LP at the Electric Ladyland Studios in New York (which is set for release after the summer), The Big Pink are something of a shoegaze band, but don't let the (most likely) ill concieved label fool you.

With guitars that push you into the back hall of a dingy night club, The Big Pink use a perfect balance of electronic instrumentation to bring something new to the floor. With a voice that brings forth the pixes or placebo (at times) I am falling in love with these possibly destined londers who don't want you to to die wondering.

I say destined not only because these guys seem to have the crossover strength to get to me and then some, but neither are new to the world of success in the music industry. Milo Cordell is son of 1960s pop producer Denny - which does make me wonder if their name comes from The Band's album entitled "Big Pink". Cordell also runs the Merok label, which has released cutting-edge dance acts such as Klaxons and Crystal Castles. Robbie Furze is a former guitarist with electro-punk singer Alec Empire (of in the infamous Atari Teenage Riot - which deserves a long post to themselves) and is also a founding member of the band Panic DHH.

With 3 singles released, and an LP on the horizon The Big Pink are on the verge if you ask me, but who really cares what I think - judge for yourself

The Big Pink - Too Young Love

Wow, sounds like late Everly brothers (Mid of the Sixties)
on a Big Beat & Noise Trip ! I like this Sound.

I'm insanely stoked about their new album. Can't wait! "Velvet" is one of the coolest things I've heard this year.

Wow, sounds like late Everly brothers (Mid of the Sixties)
on a Big Beat & Noise Trip ! I like this Sound.

I'm insanely stoked about their new album. Can't wait! "Velvet" is one of the coolest things I've heard this year.

I'm intrigued at how very engaging this informative article is, especially on this topic. You have hit the nail on the head with this information. Thank you for making your article so easy to understand.

I should suggest this site and your writing to all my friends when we talk about the subject. You should keep up the great work

I should recommend this site and your work to all my relatives when we talk about the subject. You should keep up the awesome work