My favorite lil lifestyle blog from London recently threw a secret party in Downtown Los Angeles (DTLA) called 'No Half Steppin'. The promotion for the event was pretty much word of mouth, mixed with some social media - Cozy Mag put one of those "RSVP" @ for the location on Instagram and that's how you got the plug. 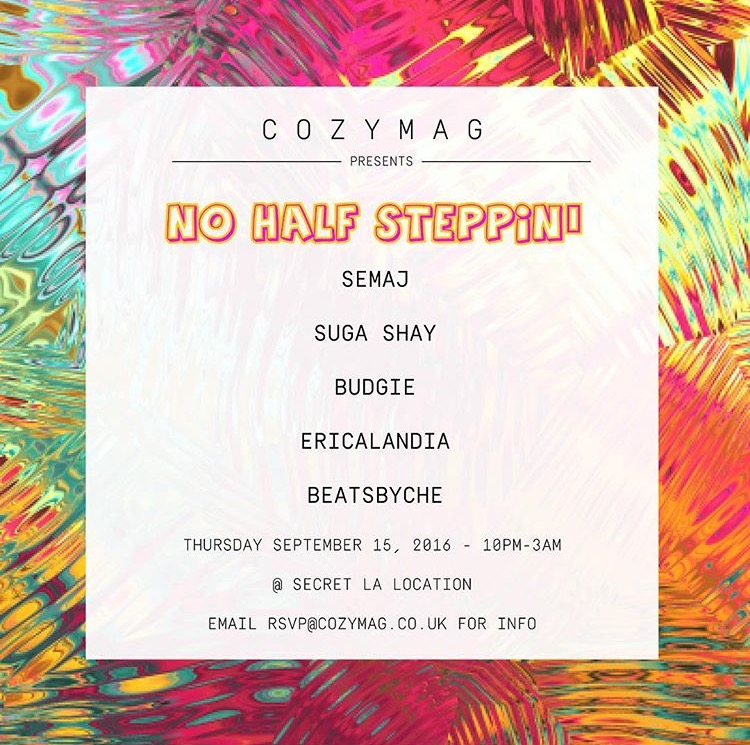 I mean, whenever anyone throws a "secret" anything and bumps a lit underground hip-hop bill with it, then there's a 111% chance that I'm coming through.

We were welcomed at the event by a security guard that I swear to G was Michael Jordan. Homie could not have looked more like MJ and I obviously had to tell him that immediately because it was trippy as fuck. He said he can't go to Vegas because everyone harasses him - I said true. I rolled up with my crew and arrived to find a nice little white sheet covering the entrance to the secret space.

We walked in and immediately found an LA by-way-of-the-Bay producer named BeatsByChe holding down the crowd from the booth. I like to describe his hip hop sound as "ethereal trap", which is straight up my favorite kind. Of course, trap gets the team turnt up, but that wavy trap is a whole new level of sensual energy to the night. You can twerk but you can also move your hips side to side in a slow grind. He's Iman Europe's official DJ and really blends the progressive productions of today with his own sexy soundscape to create a sound of tomorrow.

The night had already started off with some incredible beat and next up was a lady full of flavor that goes by DJ Eko but also by Ericalandia. My word for her would be "eclectic-as-fuck". She damn near touched on every sound across the musical spectrum. This master of moods mixed electronic with soul over hip hop thru various synths and back again with various beeps. She's known for slaying the Soultronica vibe and definitely favors playing the progressive feels altogether.

Around midnight an artist that goes by SEMAJ came thru to keep it hype. This was more turnUp trap/ electro hip-hop with harmonies layered over the progressive beats. All of a sudden, this angelic voice comes through the speakers and I looked up to find Iman Europe on the mic for a guest appearance. And yes, this was absolutely one of our #blueball moments because she was up only there for a hot second and left the crowd yearning for more.

Next up was Budgie an OG (he's actually pretty young but has an impressive rosters of collaborations) producer who has work  has worked with Action Bronson, Vince Staples and more. You also probably recognize him from Vice's show Action Bronson Watches Ancient Aliens. His set was groovy as fuck and  incorporated a Soulection-y vibe, while filling spaces with smooth synths and OG hard hits with R&B vocals and infinitely luscious loops.

SugaShay closed the event- homegirl still kept it old school while mixing in some current R&B and a little bit of reggaeton/island influence but damn is she a whole lotta woman. The fierce producer was killin' it with pretty much every track she mixed in throughout her set.

This is the second secret event Cozy Mag has thrown in LA. For those looking to get into a dope underground music event, certainly keep an eye out for their next one!