Red Bull Music Academy is a month long program that has taken place across various international cities over the last 18 years. The whole event features a mix of conferences, workshops, live shows, a pool party, planetarium experimental throat singing, and much more.

One of the most overlooked aspects of Red Bull Music Academy are the exclusive classes that are taught to select members. 70 participants took part in producing music and learning from others over the most recent installment. I spoke with several musicians involved with these exclusive classes to help explain the significance of their experience.

A lesson in identity with Daudi Matisko

Daudi is Ugandan living in the UK, born in London, but flies frequently to Uganda because of a strong family connection that he still maintains there. He explains how his inspiration from African folk music is distinct, yet also draws influence from folk artists like Bob Dylan, Joni Mitchell, and Nick Drake. He's a black musician who grew up listening to hip-hop and jazz, getting records from his older brother.

Daudi's approach to music is to provide people's ears a hug and comfort in sound. "I am most confident in that style, although on my last album I had a saxophone, synth stuff, and percussion," he explains. On his last record he collaborates with lifelong best friends Chris Boot, Ryan Buxton and Ben Daniel. Daudi dabbles with house music occasionally having worked along Booka Shade, Coyote, and a few songs with Escape, which got remixed by Justin Martin and Jacques Greene.

Daudi describes himself as living in multiple cultures. He identifies as an Englishman, yet has a second Ugandan home. The split has helped build a strong unique character, yet also situates himself in an identity crisis. It's important to acknowledge that he has no culture clash when traveling to Uganda. He can always go there and be welcomed, which he's only realized as an adult. 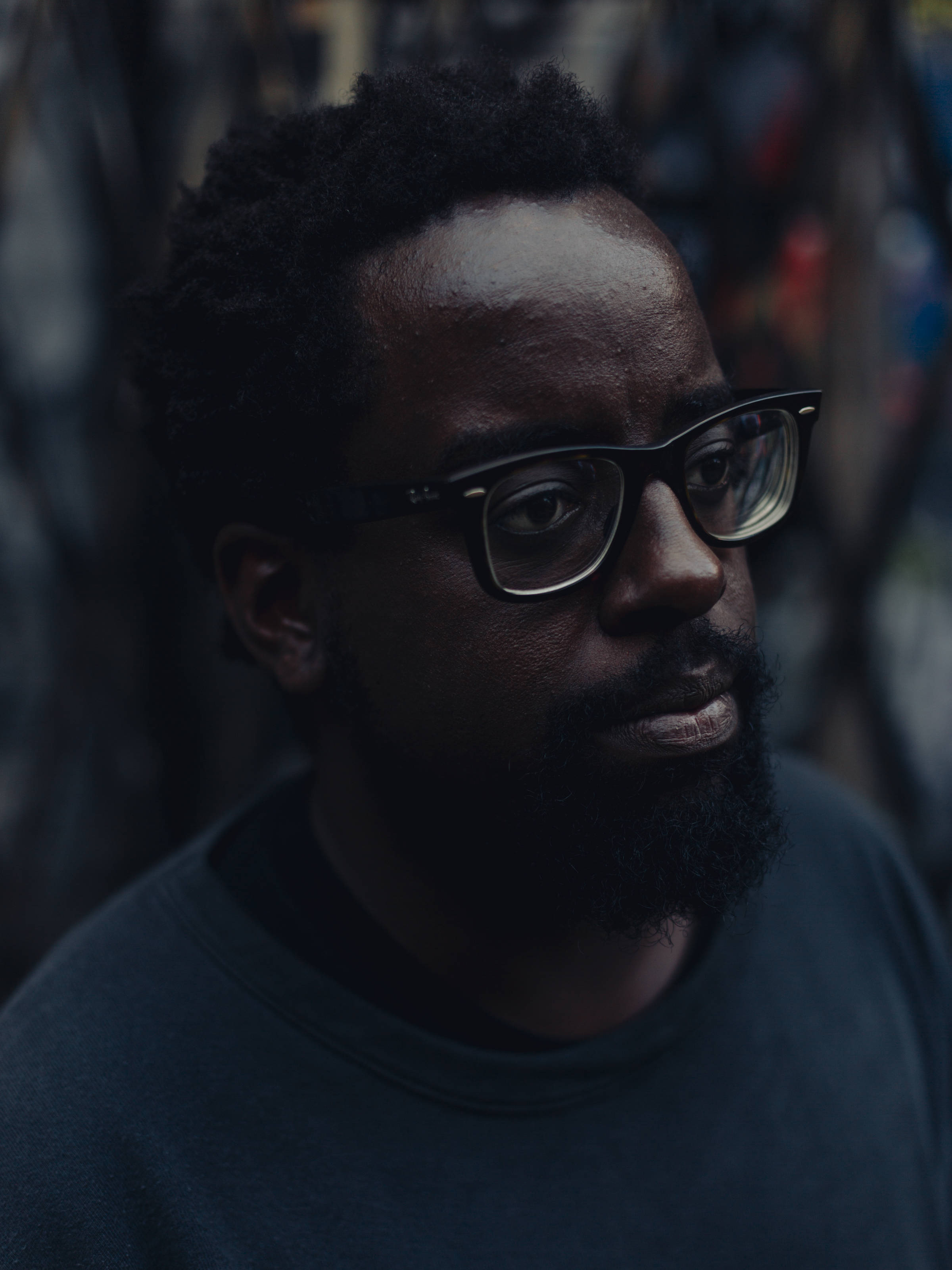 We both agree that the music community is great for meeting like minded people. I turn our discussion back to identity to see how Daudi's thoughts on a global scale have been shifted since participating with Red Bull Music Academy.

"When it comes to identity, it's a hard thing to navigate. What does it mean to be black in Britain or any part of the world? The cool thing about Red Bull's Music Academy is that there are 102 different countries represented. I have a friend who told me she doesn't believe in borders, seeing herself as a global citizen. Most musicians in places like this would see themselves as global citizens too."

The downside to a globalized world is that corporations can be more important than people, conceptually in the legal structure. The hypocrisy of capitalism today regarding identity is that we are individuals, yet we all need a phone, apps, internet, online profiles. From an artistic angle, you need to shut the noise down completely sometimes.

The interesting thing about artists is that they never need to be pidgeon holed into just one thing. There are so many people that will tell musicians to do this or do that, but when they go to make music they feel restricted. Trying to drown out the noise is key. It's important to find your own space and be creative in the ways you want.

Daudi explains to me how he does not see himself out of his songs.

"My songs represent me, so when I put it out I write a song I try to live in honesty. When I'm at my best is when I say exactly what I want to say in person. I struggle to articulate myself properly to people. When I write a song though, I can switch off and just say what I feel." 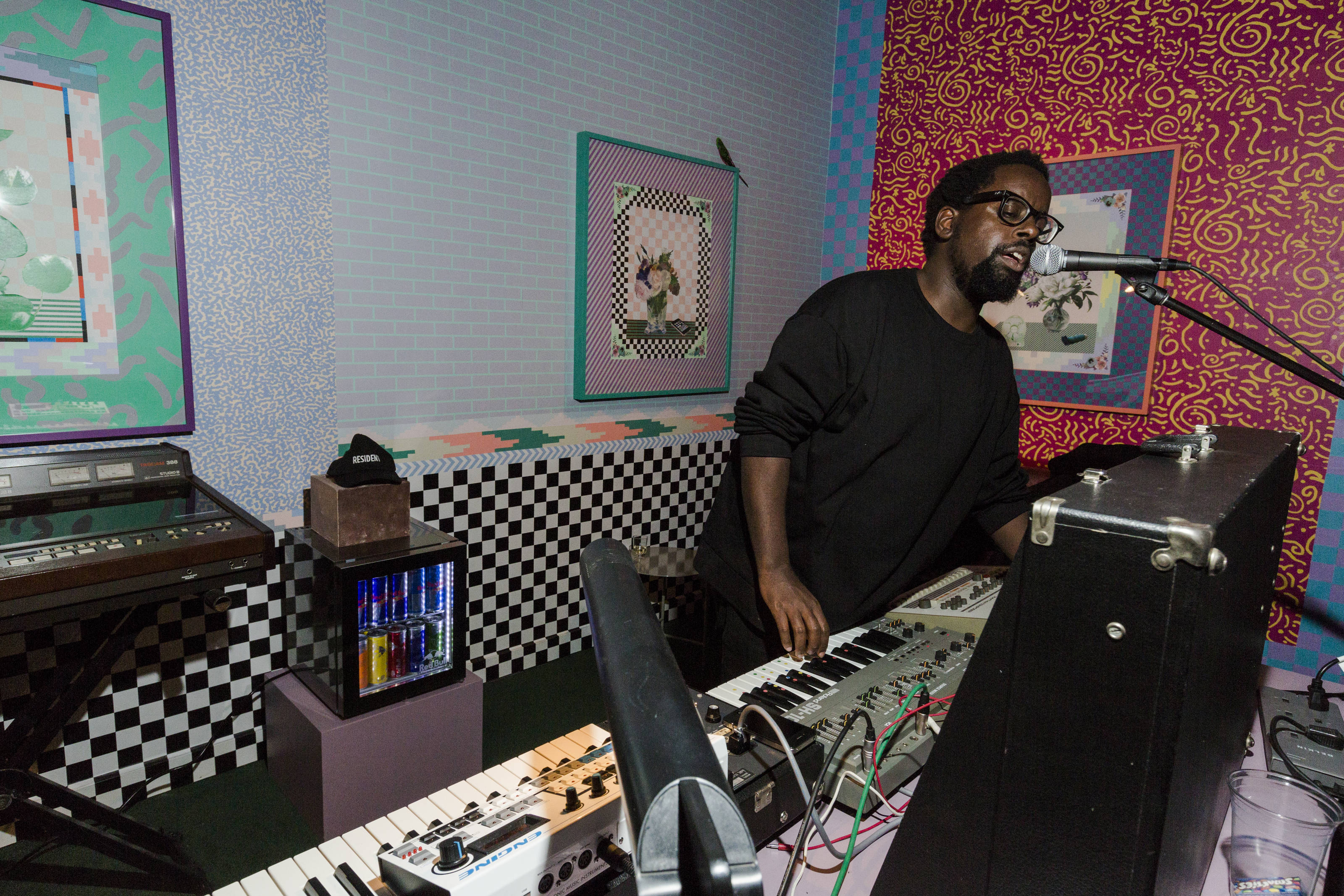 I question Daudi if being in a space like the Music Academy has helped him become more fluent in the universal language of music? The studios are such a collaborative multicultural space and people constantly walk in on other jam sessions.

"It's only this year that I've started thinking about music in less physical dimensions. With the students here, I don't know how to use Abelton and everyone has been spending time with me showing cool tricks. As a song writer, that is such an amazing thing to be shown. The biggest thing I've learnt is that it's okay to be an artist and want to do music full time taking that risk." 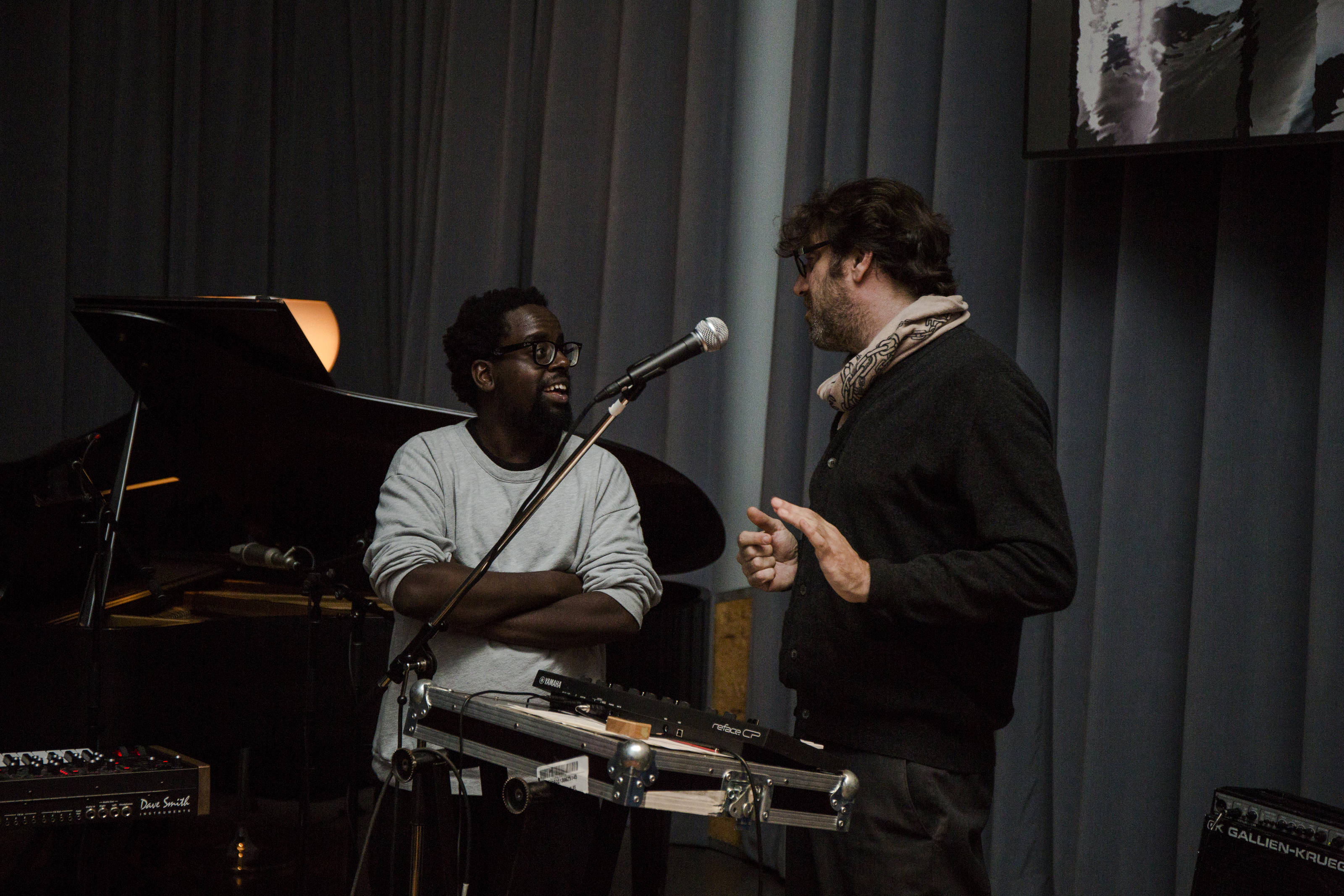 A Dinner beside Idgy Dean

Idgy Dean is a one woman band that makes tribal surf rock music. Originally from Brooklyn, she comes into conversation with an exciting energy. She makes music with acoustic drums, electric guitar, and her voice. She explains how the value of RBMA is interacting with other participants and attending the lectures for inspiration. The process of making music in the studios is intended to be challenged and redefined. 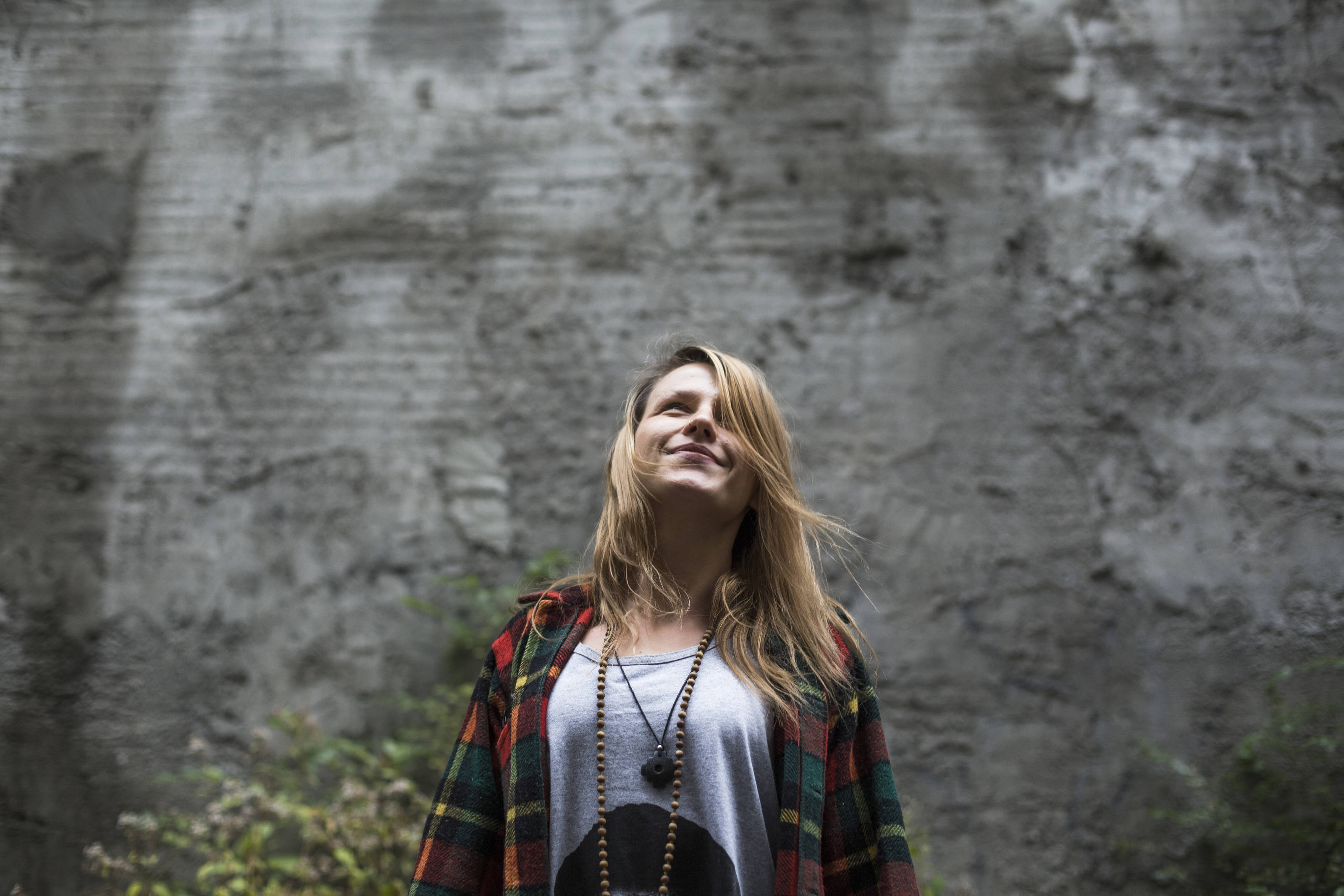 Some lectures that stuck out were Pauline Oliveras, Chilly Gonzales, Susan Rogers, and more; often artists that Idgy grew up listening to.

I inquire further about the relationships built through the participants in these sessions. I keep hearing about how creative and supportive everyone involved and who work at the Music Academy are.

"I've been very impressed by my peers, everyone is intelligent, mature, optimistic, and that's been refreshing. It's overwhelming being here with lots of different people, hoping between rooms to hear what their working on. It's hard to focus on one technique since it's fluid, simultaneously trying to develop your own sound while with other people." 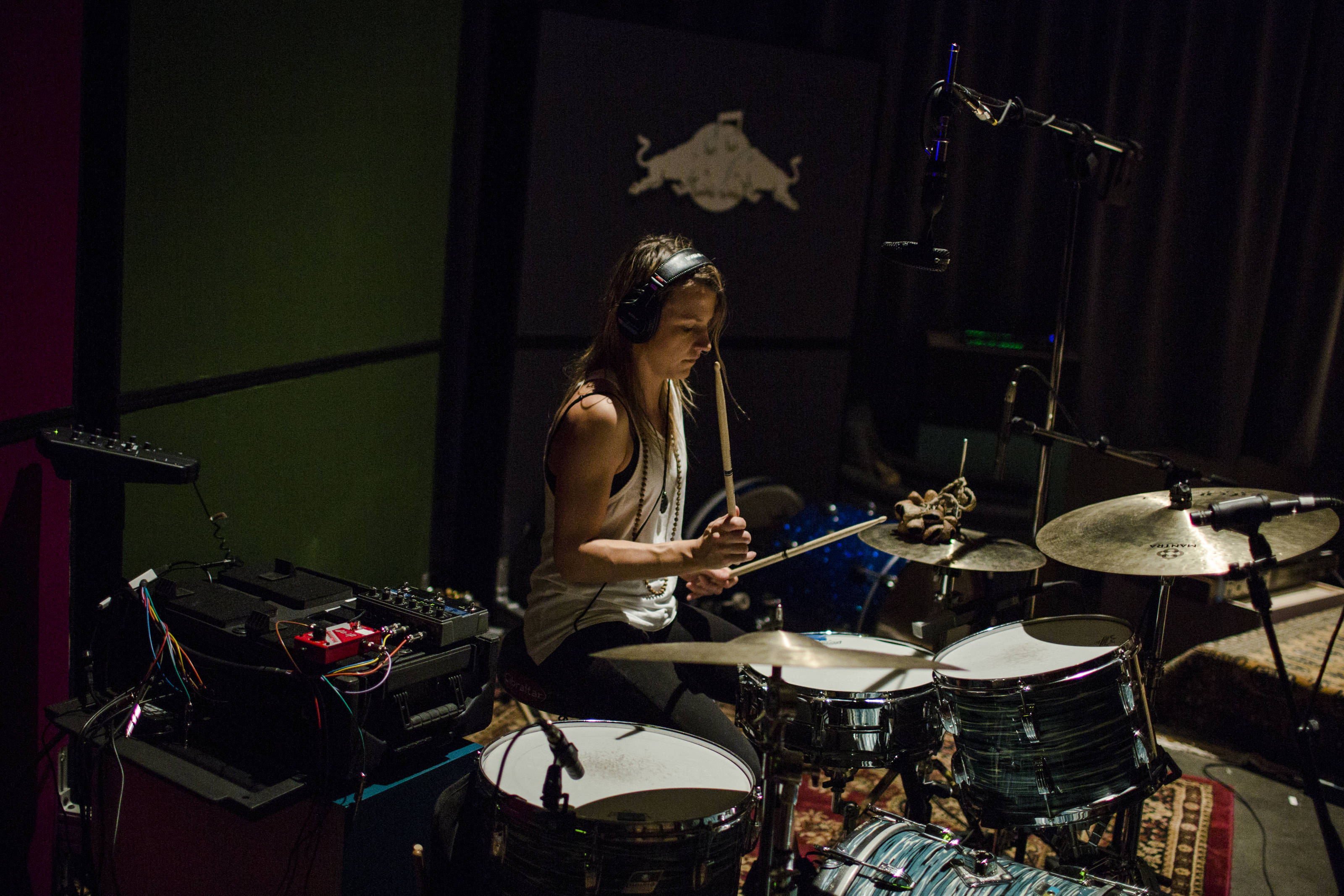 One of the biggest lessons Idgy took away from the whole experience is learning about the strengths and weaknesses of what it is that one does. The luxury of being able to focus entirely on music for 2 weeks will have a lasting effect. Her most sustainable takeaway is preserving the positive energy in some capacity when back home.

The Sine Painter and I discuss cultural structures

After stepping out of tUnE-yArDs conference, myself and The Sine Painter step aside together to discuss his thoughts and experiences making music. Jayanth originally hails from India where he feels that the industry is giving people a lot of shows until their completely worn out, then find another producer because there are so many people.

" When you grow up you want to start making the best music that you can. There may a point where your friends like your music, but you're stuck. It's cool, but now what? You may have good music, but there is a disconnect between making good music or making music as a career." 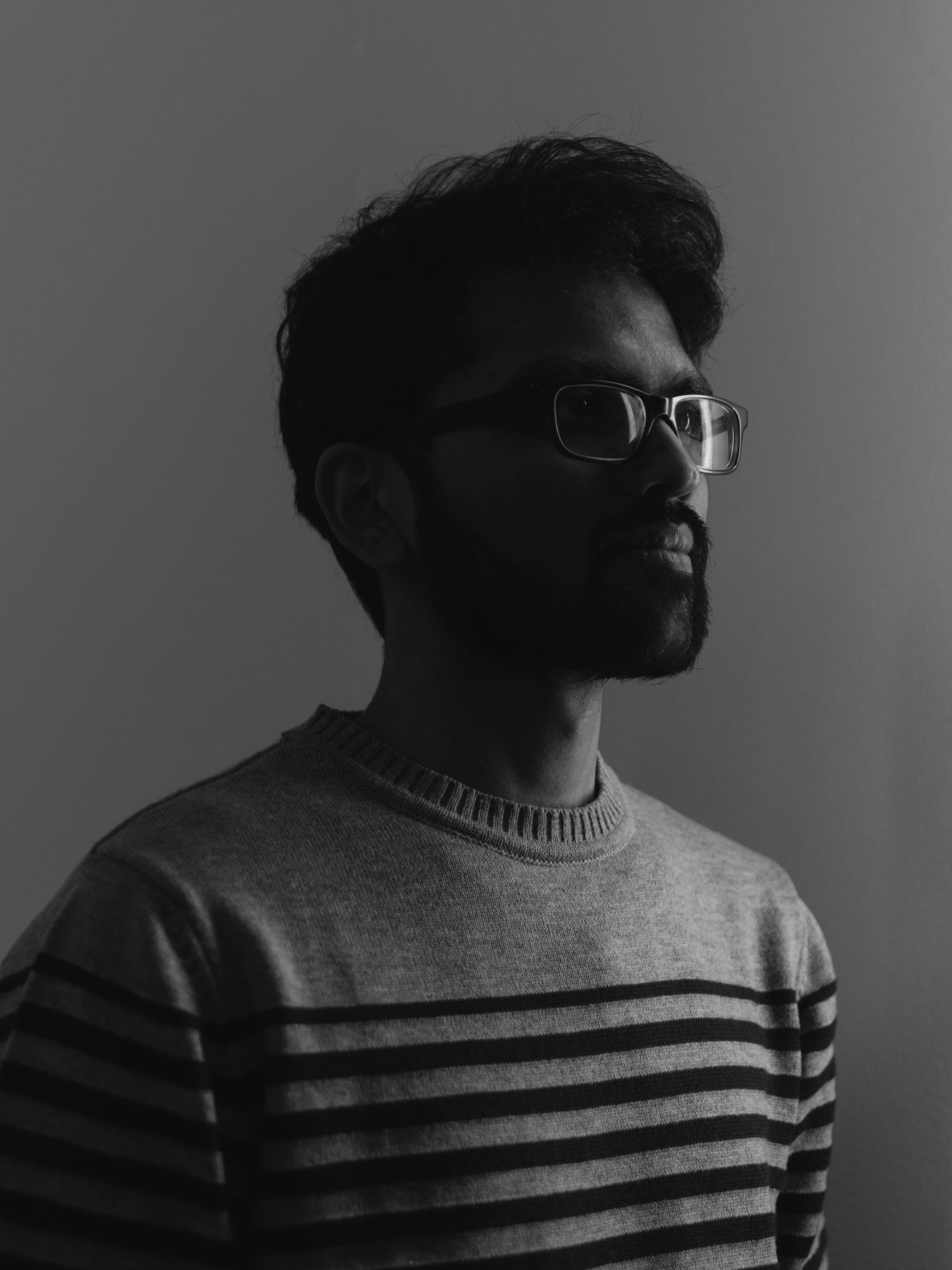 If you're doing an EP release, then you'll want to divide the songs among different blogs. It's enticing and helps to make a connection, as well as reaching a larger audience.

Jayanth has started to notice how making music starts to have a shining review on the internet. Everyone seems to think their home doesn't have an audience for them, yet they're from Amsterdam or Berlin. It's a universal problem and we need to start thinking about how to improve our situations as artists. What is an artist's role to help a scene grow?

We start talking about how where someone is from can affect the sound they develop. For instance, South Africa is really big into deep house, but experimental music may not resonate. Certain crowds appreciate certain kinds of music because of the crowds that go to that type of scene. You can't force anyone to like anything.

"If there is a growing culture a structure starts to form. When I made music with others we  work within that structure, but try to push the boundaries together. If I had a selfless view, I would be stuck to imitating that structure." 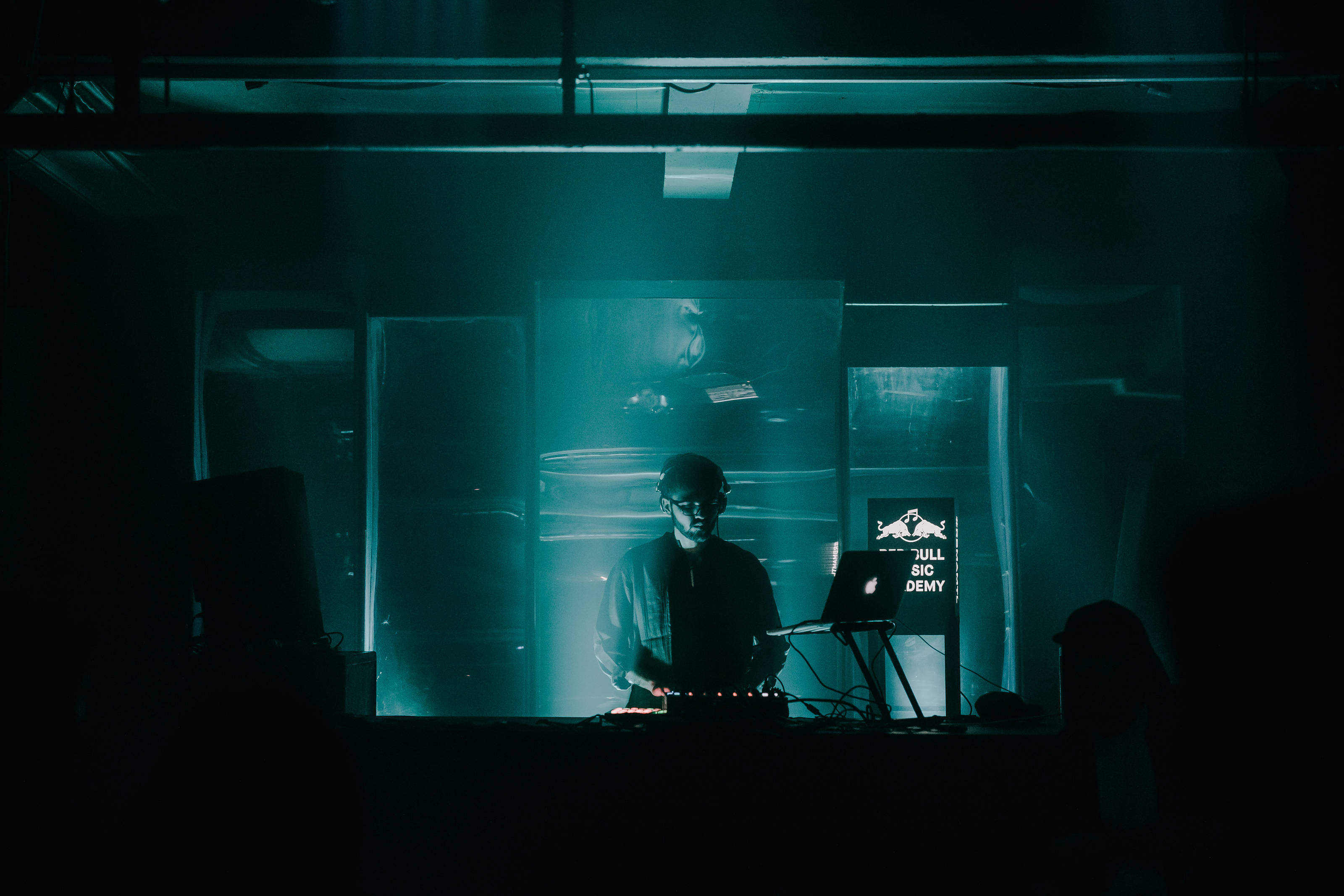 The Sine Painter makes an excellent example of Atlanta and the hip hop producers working there. There is all the samples, hi hats, mixes, which are the corner stones of the music. The producers are going to take the structures and lift them to new levels. Every time he starts a track it is without structure, as if from scratch to seem like an exploration.

I ask about the studio's spaces and how they have helped shape his style.

"It's definitely helped a lot, especially watching how other participants approach sound design. Even just listening to their music you get so many ideas you wouldn't normally think about. Hearing an artist like tUnE-yArDs speak today is all new perspectives to me, you can learn something from everything people say. You need to incorporate what you learn into your own music as well." 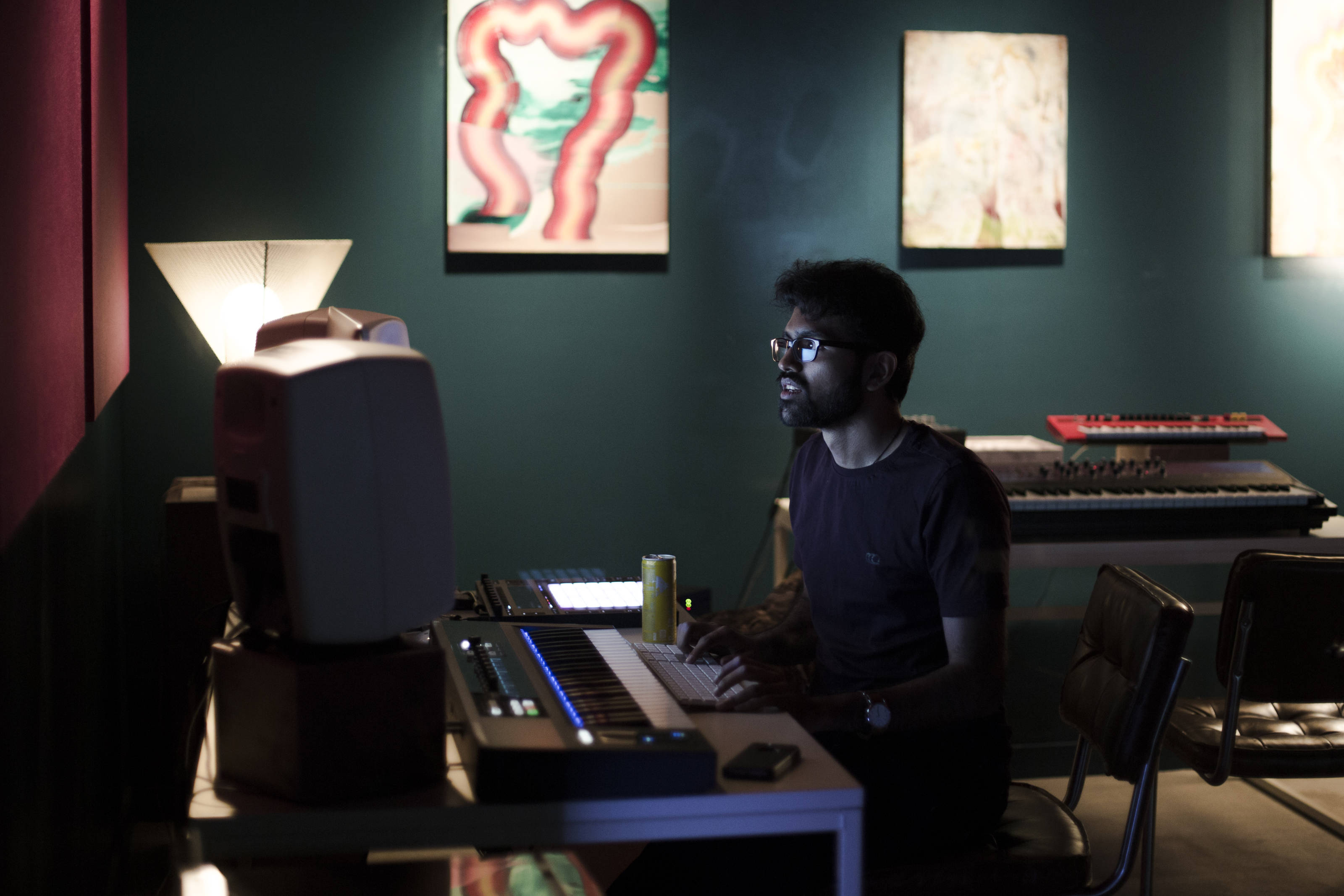 The room that they work in is well equipped. It's a very inspirational space with a grand piano, guitars, vibraphones, mostly meant for larger jams. The studio is connected to a control room with a mixing desk, built for recording music. There were also 10 other smaller studios, that had fishbowl windows and doors without locks. The Red Bull Music Academy was an open arena for communicating new ideas.

"A keyboardist walked in on me, asked to hear what I was playing then added keys over it. In another instance, a producer gave me loops that he had made, which we mixed together. A vocalist walked in and sung on the track, which we did some effects on. Another singer came in and asked to join, so now it's a four part collaboration!"

Through a lot of my dialogue, I asked about what these participants will take away from the whole experience. The most common answer being that it is possible to make a career out of music. Making money off music is increasingly difficult, so creators need to think about looking into other ventures of work. The Sine Painter explains how hearing the professionals through the conferences helps him realize how people on an A level have the same concerns that him and the other participants have. Sometimes it's okay to start small before working on a bigger project.

A Dessert with Angus Tarnawsky and friends

The discussion starts after moving around the eating area speaking with other participants freely. The room feels alive with people moving around constantly getting drinks, food, I come across Angus Tarnawsky sitting with a group of electronic technology inventors from So Giant Steps. Angus is from Australia but has been living in Vancouver for the past few years moving back and forth with NY.

The participants are given a big message on the first day, was that we could do whatever we liked, as long as they went to the guest lectures twice a day. Other than that they had certain events, workshops, and could play live for a crowd, but nothing was compulsory. Given that they flew everyone to Montreal, they expect the participants to go to the private conferences. They were taken care of very well! 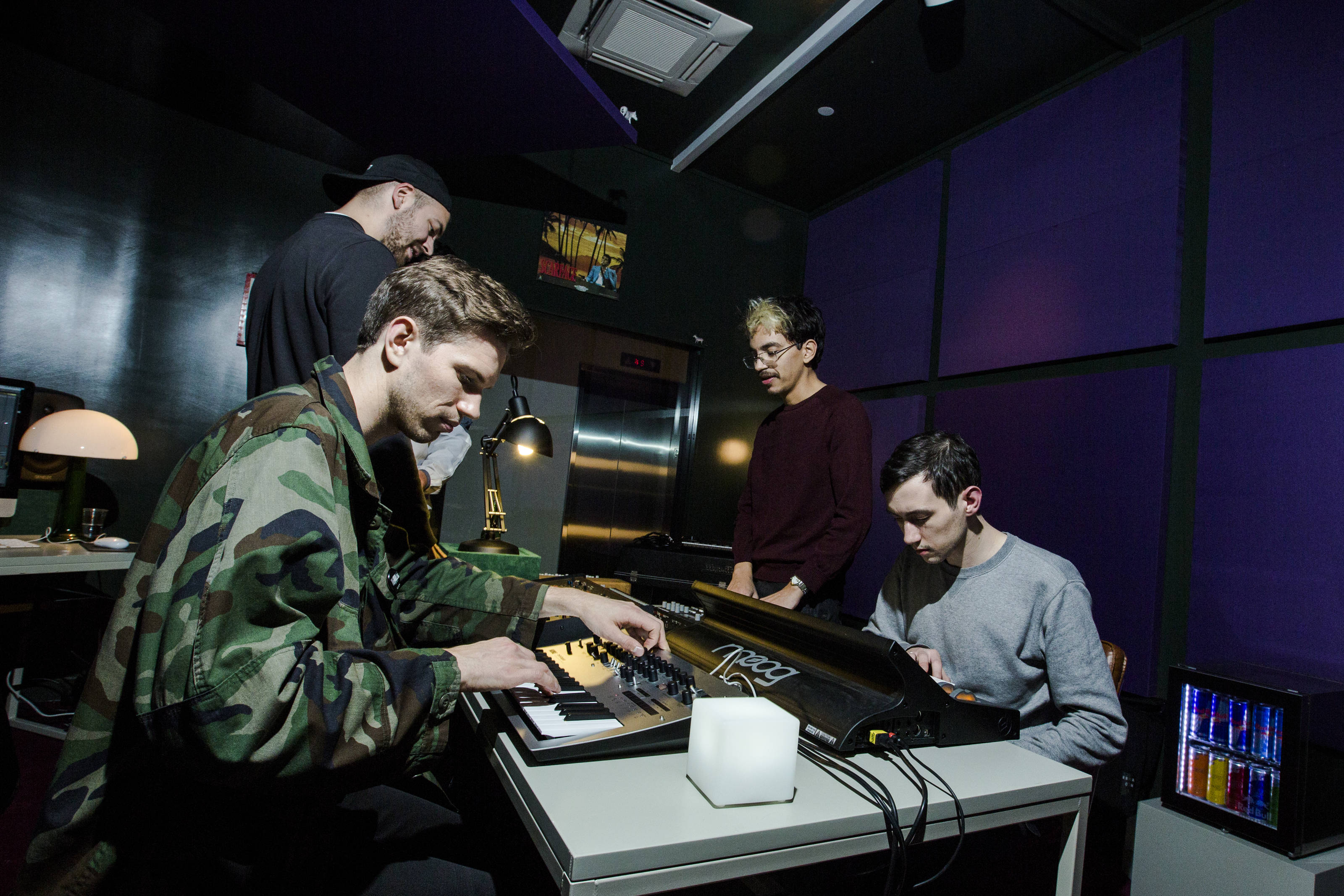 Our friends did not quite understand how much the Academy members live in an artist residency. Obviously, that perception can be changed the more media talks about how the process works. They chose 70 different musicians from around the world out of over 4,000 applicants.

Despite the luxurious life offered to the participants, there was one major concern that we shared. The public did not know that much about the participant's role during the Academy session. All the live music, like Tiga, Susanne Ciani, Theo Parrish, Chilly Gonzales, and more were extra. Most of the opening artists playing were participant members who heard the headliners earlier giving conferences. 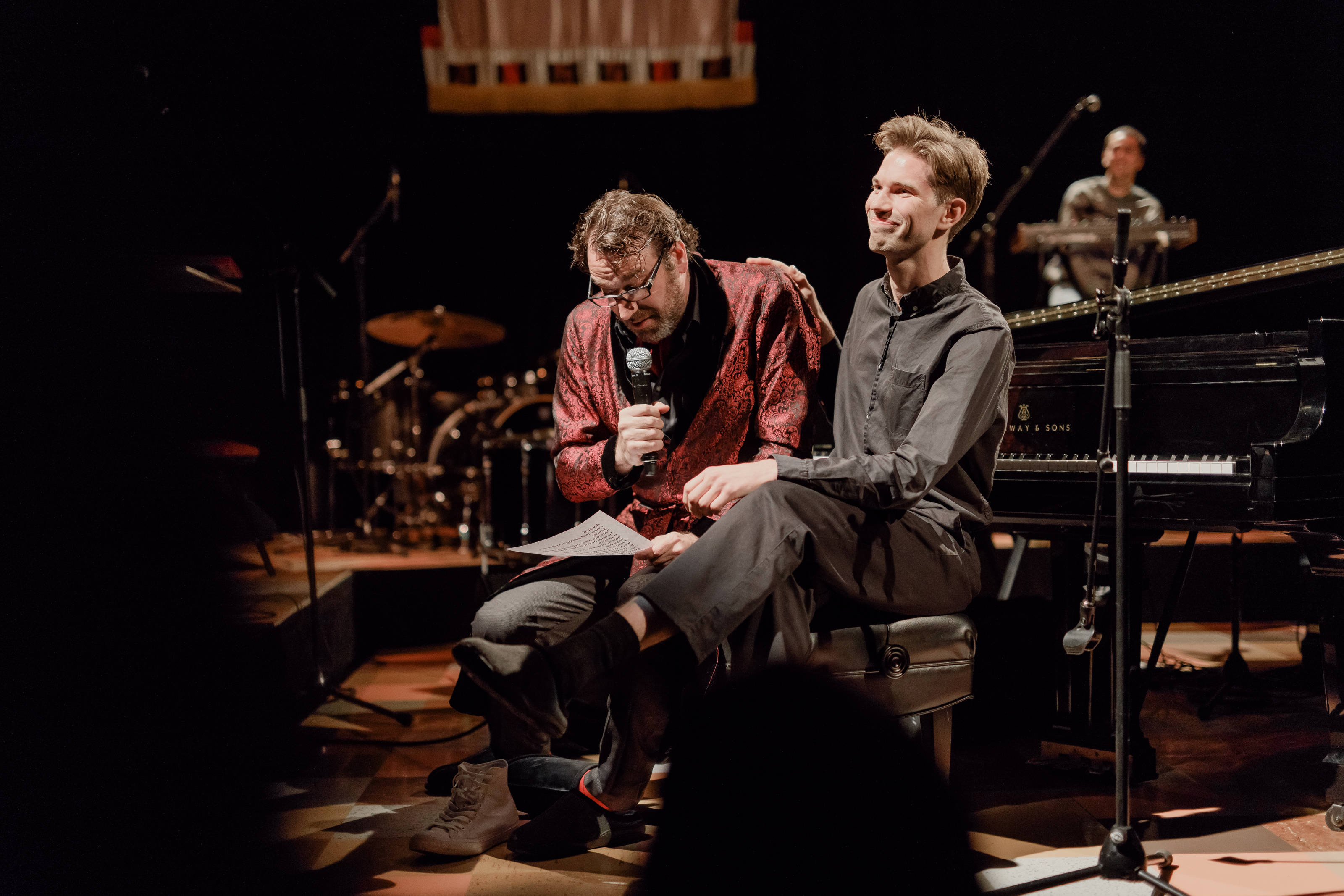 Red Bull Music Academy takes the concept of a global music studio to new dimensions while offering intriguing recording spaces and venues. All 70 participants are given an incredible opportunity to strengthen the musical community between experience meeting each other, Red Bull's staff, journalists, label agents, radio jockeys, sound producers, locals, and many more useful contacts. Whoever is chosen to be a member of the annual event truly receives a once in a lifetime opportunity.