A 90-degree heat is beating down the back of your perfectly curated Urban Outfitter’s get-up, your breath reeks of the tequila you just chugged before walking in, and you’re surviving on under 1000 calories a day consisting of a dried out Nature Valley bar and half a slice of your friend’s pizza. Despite this, you still have to trek between Coachella's 7 overwhelming stages with your friend groups splintering between new indie bands, raving in the Sahara tent or just buying an overpriced popsicle to cool down. So, what do you do? According to an old tale passed down from the native ancestors of Coachella, a wise man once said, “When in doubt, just Do LaB.”

The Coachella Valley Music and Arts Festival was an early pioneer that has helped lay the groundwork for the burgeoning modern festival culture. Festivals like Lightning in a Bottle, Symbiosis, Northern Nights and Bass Coast allow for art and sound to collide into one entity, transcending experience into a realm of aesthetic arrest. The Do Lab is Coachella’s entryway into another dimension of live music and an experience that is difficult for them to figure out how to extend across their 50 acres of festival grounds.

Although Do LaB is a separate company from Goldenvoice, it is considered Coachella’s lifeblood. Merely, it’s a modern day festival within a large scale outdated one, and fans are quickly catching on. The stage acts as a magnet to attendees that are sick of walking miles around the festival, especially when they figure out that expertly curated music is held at some mysterious wonderland that looks more like an art installation than a stage. Year after year, the Do LaB lures newcomers in through thumping basslines, immersive stage designs, and ultimately, the feeling that you are part of the experience and not just a bystander.

The Do LaB introduced a new stage design for 2017 dubbed, “The Beacon,” which simulated the experience of being SpongeBob living in a pineapple under the sea. For most Do LaB goers, it may have felt like they literally were in the sea; whether it was from the blissful shower of the floral covered water guns, or drowning in the wobbling bass after being shaken to their core by Bleep Bloop, Space Jesus, or The Gaslamp Killer. The massive circular structure decorated with a blue geometric canopy and a yellow pineapple chimney let just enough sunlight in to keep it lit, but dark enough for everyone to fully mosh out with a stank face and not give a damn who was watching.

The Beacon didn’t need a 50-foot LED screen projecting visuals behind the DJ or lasers flashing over the crowd. Do LaB understands that curating a vibe is a hell of a lot more important than appearing like you’re curating a vibe. That's a crucial piece of understanding that builds upon the early frameworks originally set by early festival curators like Coachella but have been unable to update. When the stage surrounds you, instead of being in front of you, a new type of relationship with live music is engineered through aesthetic immersion and oneness with your environment. So when Mr. Carmack throws down a wonky industrial trap synth with a kick drum heavy enough to knock your panties off, you aren’t just watching the experience, you are the experience. 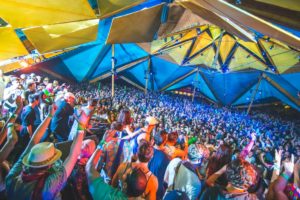 Although electronic centered, the diversity of the lineup does plays off of a multitude of styles. With artists like Shiba San sending the crowd to an underground French warehouse, Space Jesus signaling aliens to come join the banging grime-filled psychedelic dubstep party, or the soothing vocals and catchy melodic chord progressions from Bearson, there was truly music for everyone from all parts of the world. The variety of the lineup’s quantity and quality was apparent enough to have the crowd constantly overflowing from the stage, from open to close. The Do LaB has mastered their craft at a profound task. By constantly innovating and creating evolved levels of experience, they redefine what live music is all about. This is also a concept that could potentially extend to other genres that Coachella offers as well. Inevitably, the Do LaB is a gateway to the future of festivals. If Coachella is the old king, then they are wise in keeping the young new knight in shining armor close by their side.

For new Coachella attendees, the Do LaB seems like some made-up dream world that only exists in fairytales. Is it really possible to experience genuine bliss while listening to an array of the most exclusive underground music, being sheltered from the sun by a breath-taking art installation, and eternally surrounded by a crowd filled with grins and dance moves ranging from “dad at the barbecue” to interpretive tribal rain dancing? Yes, it is possible. And fortunately, it is only a sneak peak into their own festival called Lightning in a Bottle which goes down in late May. So, when in doubt, just Do LaB.