Attending the Grammy Awards as a reporter is more of a frustrating marathon than a glamorous red carpet event. Most viewers tune in for the 3-hours of red carpet fashion, over-the-top musical performances, heartfelt acceptance speeches and an occasional unplanned "Kanye-type" incident. But many don't know that around 80 awards are given out that day, and about 70 of those awards are distributed during the pre-ceremonial event prior to the televised main event. This pre-ceremony recognizes various artists across the wide spectrum of music and includes everything from Best R&B Album (Lalah Hathaway WON) to Best Dance Album (Flume WON) but it also starts at 12:30 pm PT and then goes on till the main event begins at 5:00 pm PT. Unless you're Ryan Seacrest interviewing stars on the red carpet, most of the press are huddled together in a dark media room away from all the action and view the entire event from these small live monitor screens. It's a long day and if you are lucky, you can sneak off to either eat a boxed lunch graciously provided by the Grammys or see some of the show. So that's where this story begins…

The pre-ceremony awards are wrapping up and everyone is slowly rushing over from the convention center to the Staples Center for the main event. I missed breakfast that day and have already been in the media room for about 5 hours before finally just grabbing a cold turkey sandwich and taking a break. After hopelessly searching around the entire arena, I find an open table of blissful salvation in the vendor/food area. As people dressed in glamorous gowns and fancy tuxedos are running past me to find seats, I sit down, plug my charger into a nearby outlet and begin checking emails on my phone.

Suddenly, a gentleman dressed in a clean tux walks up to me and says, "Imma share this table wit you." I openly nodded and said, "Be my guest." He turns from me and quickly leaves around a corner before coming right back. He looks at one of the chairs, picks it up and takes it back around that same corner. He then returns to grab the other open chair. One last time he returns and grabs the table, it was a bit heavier than he had anticipated so rather than lifting it, he slowly drags it back around the corner. As the screeching sound from the metal legs scraping against the floor slowly fades into the short distance, I was left in this long hallway, sitting awkwardly in a chair, by myself, with a depressingly half-eaten sandwich in one hand, and my phone in the other.

The way he just so easily deconstructed my little island sanctuary completely threw me off. He pops back out from the corner and joins a group of some other larger gentlemen to form a sort of circle of trust. I yell over to him, "Yo, you can't just cop my shit like that." The entire group turns over in unison to face me, a cold chill of regret slowly creeps down my spine and he proceeds to walk over and says, "2 Chainz wanted to eat alone and he just won a Grammy." He confidently turns back and joins the rest of the ensemble. 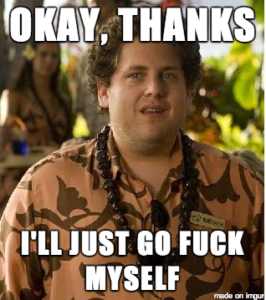 So that was kind of the end of that, I guess. 2 Chainz had in fact been nominated this year for 'Best Rap Song' and won the Grammy for Best Rap Performance, both for his track "No Problem" which includes Chance the Rapper and Lil Wayne.

In my opinion, 2 Chainz really should have already won his first Grammy back with his 2012 nomination for his debut album, Based on T.R.U. Story. I have an incredible amount of respect for him and his Grammy Award this year was certainly overdue. As a music critic, I was extremely excited for him but I too had a long day, with another 4 hours of work to go and a shitty cold turkey sandwich to still finish. So if next time he needs my table to enjoy a private celebratory lunch, maybe ask, or get your own damn table.