At some point in our lives, we’ve all described something as real, like ‘I love that dude because he’s so real’ or ‘everything those guys create just feels so real’. We add that emphasis to indicate that this thing, whatever it is, doesn’t simply exist; it practically transcends existence itself. There’s just something about it that makes it feel like more. But what are we actually talking about when we use this alternative, italicized version of real? Certainly we’re invoking some vague notion of an existence based on truth and fact and authenticity; it’s something we’ve all wanted at some point in our lives, to be real, to feel greater than ourselves and part of this pervasive, ineffable sense of real.

Last summer, Australian singer-songwriter Courtney Barnett arrived in New York City for a sold-out, Wednesday night show at Terminal 5. Barnett ,  for those not familiar ,  has quickly established herself as one of the superlative songstresses of our generation. The Australian's deftly brazen 2013 release, The Double EP: A Sea of Split Peas, paved the way for her equally remarkable 2015 record, Sometimes I Sit and Think and Sometimes I Just Sit.

Barnett is most revered for her cogent, relatable songwriting — specifically for her elegant representations of the mundane—and the craft has garnered her comparisons to Dylan. So resonant is her verse that she received an unexpected 2016 Grammy nomination for Best New Artist, placing the indie guitarist alongside mainstream pop acts like James Bay and Meghan Trainor. Barnett didn’t get the award—Trainor, who somehow qualified as a “new artist” despite owning a 2014 Youtube video with 1.2 billion views, won the Grammy—but the nod alone legitimized Barnett’s meteoric rise from indie lyricist to household rock ‘n’ roll darling. It’s a journey made possible largely through her ability to capture that aforementioned, ineffable sense of real — more on that later. 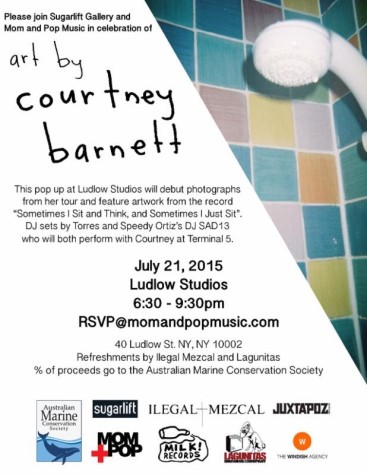 Barnett arrived in New York a day early to debut artwork and photographs at Ludlow Studios, a modest gallery in the heart of Manhattan’s Chinatown. I received a press notice via email and, already a big Barnett fan, I responded to secure a spot on the guest list.

When I arrived, there were already about 50 people there, jostling about with drinks in-hand, exploring the gallery. On one end of the space, framed prints of black chairs set starkly against white backgrounds and white mattes hung unassumingly on white walls. On the other end, postcards of showerheads taken from several, seemingly arbitrary vantage points hung with Barnett lyrics beneath them. They said things like “I’m saving 23 dollars a week” and “I much prefer the mundane.”

Together — with chairs on one side and thoughts on another — this thematic microcosm of Sometimes I Sit and Think and Sometimes I Just Sit was really coming together nicely. It was about that time that Barnett entered the room. 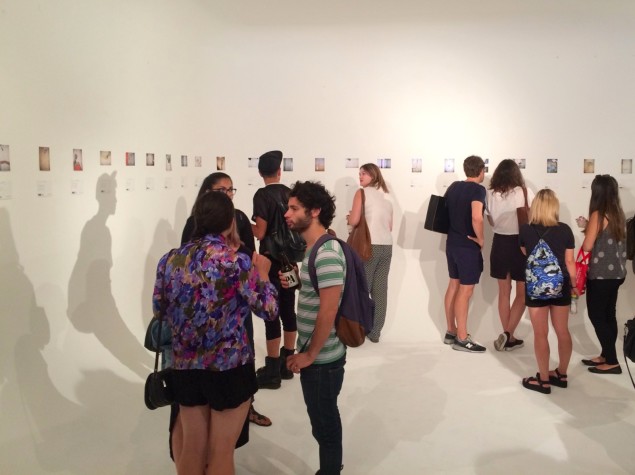 I hung back and watched people casually swarm. As she roved amiably it became clear that this was not a press event; most people that approached her were simply admirers sharing plaudits and well-wishes, collecting a moment with Barnett that they could keep spring-loaded in their back pockets for easy, future reference.

At first I was a little dismayed at how contrived all of these interactions felt. It must be so cumbersome, I thought, to have a thousand strangers come up to you and tell you that you’re great and that you really speak to them and that there’s so much relatable truth in your lyrics. Then I realized that was exactly how I felt about Courtney Barnett — everyone there felt the same real in her music that I felt, and they just wanted to share that with her. How could I blame anyone for that? I mean goddamn, that feeling is so rare and it should be celebrated — if you have the opportunity to thank the person that created that feeling in you, you would very nearly be remiss not to take it.

But, alas, I did not take that opportunity. I just continued to meander around the gallery, celebrating with an IPA every time I finished a lap, drowning my ‘contrived admiration’ rationale in liquid courage.

Eventually I found myself outside talking with a young musician about relatability. We talked about Barnett’s ability to channel a fundamental baseline of humanity in such a simple, poetic way, and we decided that it might be what made her feel so real. He compared the idea to Norwegian author Karl Ove Knausgaard’s six-volume, autobiographical series: My Struggle.

Knausgaard’s first volume begins with the line: “For the heart, life is simple: it beats for as long as it can.” Such a simple, obvious declaration, and yet that line, in its simplicity, is already suggestive of its irony; it nearly begs the response: ‘but for the heart, life is not simple.’ It’s a complex duality that Knausgaard presents so plainly. He just puts it right there in front of us for us all to relate to, and we are practically forced to do so — as New Republic’s Evan Hughes once said, My Struggle is like “opening someone else’s diary and finding your own secrets.” 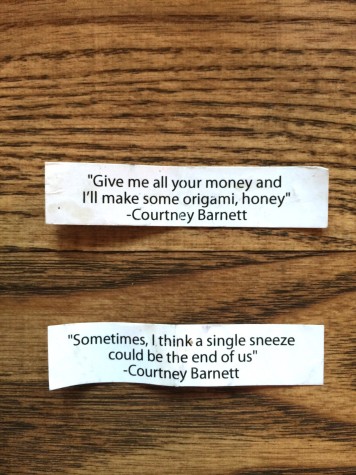 There was a big bucket of fortune cookies at the door of the gallery, so I grabbed a couple on my way out because how could you not. They were filled with Courtney Barnett lyrics, and they said things like “Give me all your money and I’ll make some origami, honey” and “Sometimes, I think a single sneeze could be the end of us.”

It was, indeed, like borrowing a page from her diary and finding thoughts that I never even knew I’d had. I could apply the fragility of that last line to a hundred different moments in my life. Everyone has their own fragile moments that, too, feel like they could be ruined by a single sneeze. Though these moments are ephemeral and unique to our individual selves, their triggers are not. We all worry about sneezing at the wrong time every once in awhile, and we all have hearts that beat for as long as they can, and we all know how very not simple hearts are when they feel things.

These ideas are eternal in the scope of what it means — and what it has always meant — to be human. Our diaries will always have overlapping sections because our hearts and our sneezes actually are a part of something greater, part of that pervasive, ineffable sense of real that flows through us all at some fundamental, baseline frequency. And when someone hums that frequency, when they really hit it perfectly — be it Courtney Barnett or Karl Ove Knausgaard or any of the other singers in our lives — it is impossible to misconstrue that feeling for anything but real.

When I got to the subway that night, there was a hapless man singing Otis Redding’s “(Sittin’ On) the Dock of the Bay.” Redding wrote the song while sitting on a houseboat in Sausalito, California, inspired by the ships that entered and then left the bay. He died in a plane crash in December of 1967, a month before the track was ever released. Yet here it still is, wafting through the subways of New York and beyond. 48 years later, we still sing about watching the tide roll away, because we all sit and think sometimes, and sometimes we just sit.