Where are all the women? Techno as a so-called "inclusive" genre

The history of electronic music is rooted in inclusivity. Berghain, a venue in Berlin often referred to as the temple of techno, was initially a gay kink night called "Snax" that found monthly residency at Ostgut— a club that closed down in 2003, leading to the formation of Berghain in 2004. Those that didn't see a representation of diversity or sexuality in normal nightlife sought out events like these. Transient clubs, which were unique to Berlin after the wall came down in 1990, were created by people with no money and they practically made no money— their sole purpose was to allow the expression of the repressed, and the influence of music business had not interfered yet as most of these clubs were not profitable (and many were illegal). The abandonment of the East because of it's poor conditions after the reunification of Berlin created the climate that allowed the use of such spaces. Abandoned buildings that previously held factories, strip malls, and banks, were then turned into music-flooded havens in an area that had been repressed for decades by the GDR. In most cities, temporary spaces are atypical; mass vacancy in cities implies a certain amount of chaos, something that Berlin embraced into its identity through lowering the bar of entry to the field of making and performing music. Because it was so inexpensive to create events, music truly became accessible to everyone. As these spaces transitioned from unlicensed pop-up events into more permanent nightclubs, they became places where women experienced less harassment and judgment from those around them in comparison to a stereotypical commercial nightclub atmosphere.

The counter-culture that grew from this niche of nightlife really pioneered what was played throughout Berlin during the 90's when the original techno sound that had migrated from Detroit was still being established, and that innovation inspired the rest of the world's definition of techno today. This connection between the creation of this genre and the creation of spaces that celebrate equality and individuality is at the basis of techno— to then remove women from the equation is self-contradictory. But even in a city as inclusive as Berlin, a 2015 survey found that female performers make up only 10.7 percent of bookings in Berlin’s large-scale clubs, 12.7 percent of bookings at electronic festivals, and 22.2 percent of dance artists represented on German labels (conducted by female:pressure an international network of women in electronic music). So why then, as a genre with such an accepting background, do clubs feature such a small percentage of women?

I've always said it's dangerous to say "but maybe there are less women that create in this genre!" because it's a statement that can have unintended implications, one of which is that women just aren't good enough to be creating popular techno hence why they're booked/heard less. That argument doesn't make much sense— it's easily proved wrong by watching any of Maya Jane Coles's absolutely epic boiler room sets. So if not talent, what then accounts for the discrepancy in gender?

With the way that the industry is structured currently, it is the job of the promoter to broker with an artist's agent, and the promoter funds the show upfront understanding that they assume a lot of the risk for whether or not they'll make a return on that investment. Promoters aren't taking this risk on as many women artists as they are with male artists, which means likely a combination of factors make women less appealing to book in the eyes of promoters. Either many promoters are prejudice, or women aren't getting as many streams, social media recognition, or past bookings to give promoters enough reassurance that they'll be able to draw in a large audience. So how can we be more responsible music consumers and go about addressing this problem?

As a listener, use your resources to dig just a little deeper than the Spotify recommended playlist— International Women's Day posts from last month are a great place to start without having to do too much work! Femalepressure.net is another incredible source that can be used to look up a comprehensive list of women producing in dance music in your area— here is the link to their list for Berlin. They randomly feature a new female artist every day at the top of their site, so bookmark it and check it out any time you're on the hunt for something new to dance to. There are incredible artists out there that many of us are missing out on because they might not have had the same amount of exposure as their male counterparts. It's a positive feedback cycle that can only be broken with a grassroots shift in the amount of streams, follows, and tickets that female artists receive. 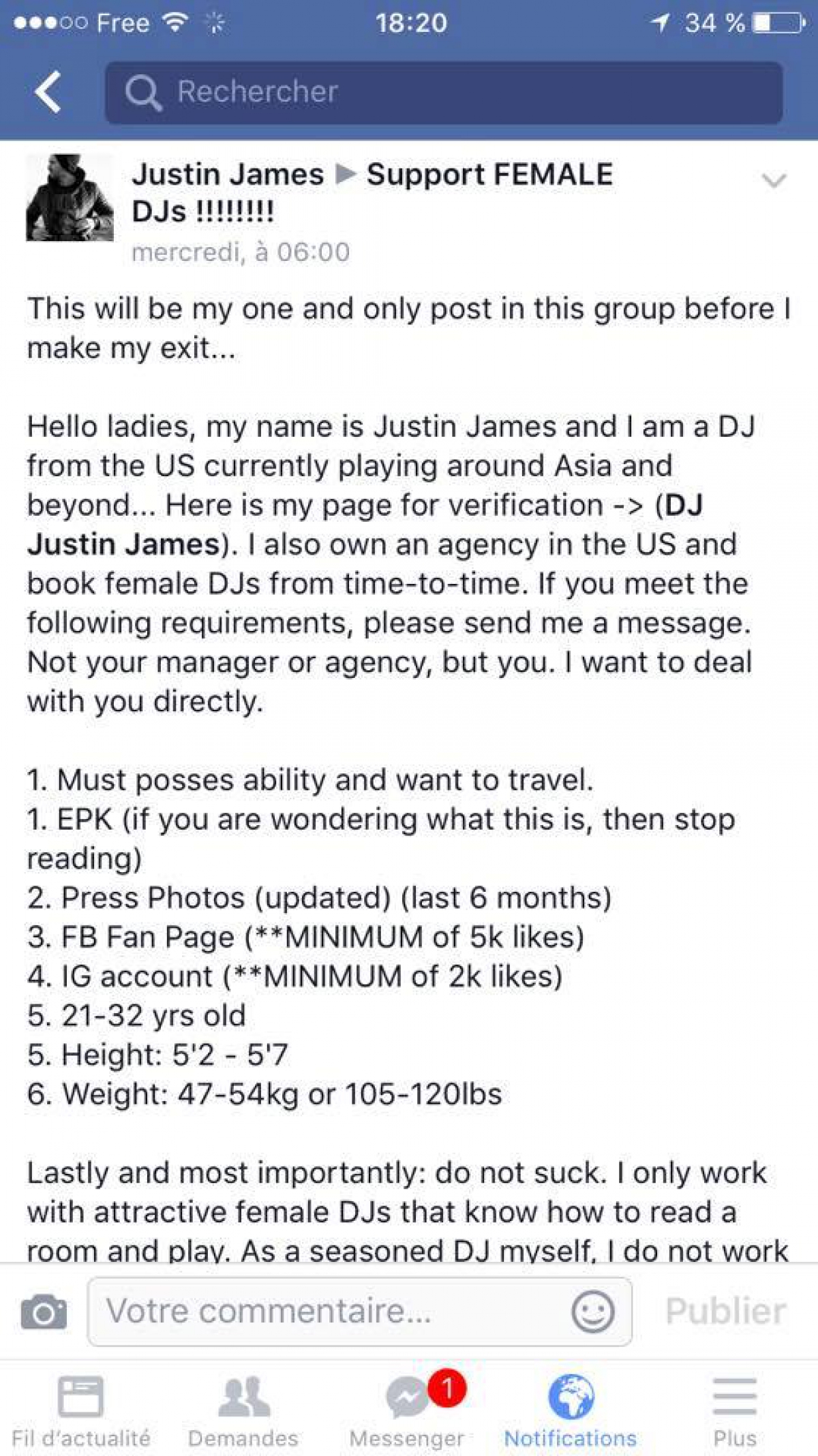 Misogynistic promoters are a somewhat more complicated problem to address. Although there is a fairly simple solution, the path to get there has its own set of obstacles. Women in the industry who support other women have the ability to cause a chain reaction that increases opportunities across the board for those interested in music. Leveling that playing field isn't an easy task, but if you're interested in getting involved there are a few organizations that have begun to get the ball rolling! Nap Girls is a movement that attempts to address this on a broader range of electronic genres. Started in 2013, Nap Girls is an international movement supported by as many big-name artists as big-name business women. Their twitter bio is a great description of their message; "a collaborative organization whose mission is to connect and empower women & GNC individuals by nurturing creative and professional growth." Follow them on twitter or facebook for a great source of artist suggestions to follow and shows to attend (particularly in the Australia and Los Angeles area), or go to their website to read more about how to receive support in career endeavors. Women's Audio Mission is also a non-profit organization based in San Francisco that's a great place for women to network and learn more about advancing their own careers and skillset in music production and recording. Happy digging!