8 months ago by David Sikorski

EARMILK is partnering up with global indie purveyors Nettwerk Records for an official SXSW showcase in Austin, TX on March 18th. The event will be held at the iconic Driskill Hotel in downtown Austin and is free with a SXSW badge or wristband. In addition to the six amazing performing artists, the night will feature free cocktails from award-winning Uncle Nearest Premium Whiskey from Nashville, TN. 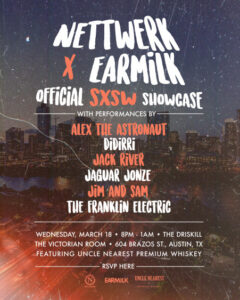 This year's official SXSW showcase will feature various up-and-coming acts from Australia – the badass and socially-minded Jack River, the magnetic alternative singer-songwriter Didirri, the multi-dimensional power-rocker Jaguar Jonze, and singer-storyteller-scientist Alex The Astronaut – as well as Los Angeles husband/wife duo Jim and Sam and Canadian indie-folk faves The Franklin Electric. For a preview of this year's act, check out the exclusive Spotify playlist below: