Neon Carnival celebrates its 10-year anniversary with expansion to Stagecoach

1 year ago by Jason Heffler

For the last decade, Neon Carnival has been one of Indio's most popular afterparty destinations for Coachella revelers. In celebration of its 10th anniversary, the event, cultivated by LA nightlife expert Brent Bolthouse, has announced its expansion to Stagecoach, Coachella's country music-centric sister festival. In partnership with Levi's Brand, Bondi Sands and the forthcoming Pokémon Detective Pikachu film, Neon Carnival is is set to bring its idyllic late-night desert vibes back to HITS Desert Park on April 13th and April 27th.

“As we head towards this major milestone in Neon Carnival’s history, we’re ecstatic to celebrate our 10-year anniversary hosting one of the hottest parties in the desert amid music’s biggest festival weekend," Bolthouse said in a press release issued on behalf of the event. "To mark this momentous occasion, we’ve decided to expand Neon Carnival to weekend 3, during country music’s largest desert weekend in Southern California.”

For more information on Neon Carnival, visit the website here and connect on your favorite social media platform via the links below. 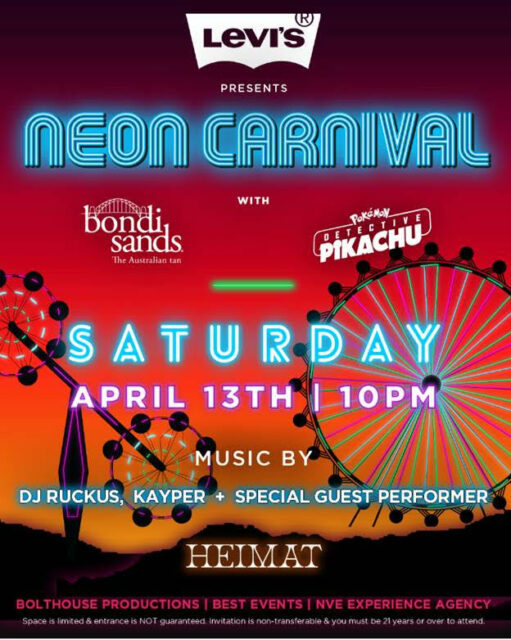