What if I were to tell you there's a music festival situated in a secluded sunny beachside location in Baja, Mexico? And that this same festival not only celebrates surf, yoga and the best in varying styles of electronic music. Ya, well pick that jaw back up and wipe the drool off because this dreamlike festival, that's marketed as the only surfing music festival, exists and it's called Genius Loci.

For a better idea of what this premier boutique festival offers, check out the trailer from their 2017 festival below:

This year's camping event will be held between June 21st and 25th and will act as the conduit between passionate yoga, music and surfing enthusiasts. The lineup released thus far will include performances from TOKiMONSTA, Kim Ann Foxman, Tara Brooks,  KMLNm Marques Wyatt, Lonely Boy, Jeremy Sole, Zach Walker, Massio, and John Wander. Fans will also be treated to sets from Genius Loci Festival co-founders, Henry Pope and Loboman.

“This year is really about two things.” says Genius Loci Festival Co-Founder Henry Pope. “We want to bring together a wide lineup of amazing music, but we also want to showcase female headliners as a living tribute to all the badass musicians who ever had to answer antiquated interview questions about ‘what it’s like to be a girl in the music industry’. This year Genius Loci is here to reset the status quo. We’re here to prove the future is female.” 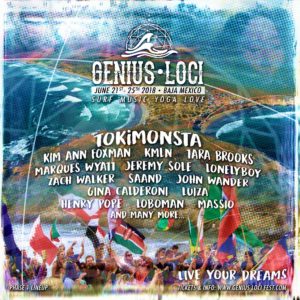 By being a boutique festival, Genius Loci can better monitor their overall positive impact on the local environment. Taken from the site: As a “pack it in, pack it out” event, ALL single use and plastic is banned, and participants are asked to be educators of each other as well as stewards of the Earth. So if you enjoy peaceful meditation with the sounds of the Pacific Ocean crashing against the warm West Coast sands, a little bit of surf and top-notch electronic music playing in the distance, then get yourself a ticket already!

Tickets are available via the Genius Loci website. General admission 4-day tickets start at $214 plus fees with the additional Parking Pass add-on for $10 plus fees.