Close your eyes and picture New Orleans. Brightly colored plastic beads, neon green yardstick-long cocktails, and boobs, right? While that isn't entirely far from the truth, it takes a few visits to our enchanted Bayou paradise to understand what the true soul of New Orleans is all about – a celebration of creativity and the unique decadence of this town. And if there's one festival that embodies the kaleidoscopic spirit and uncanny warmth of NOLA, it's the BUKU Music + Art Project. 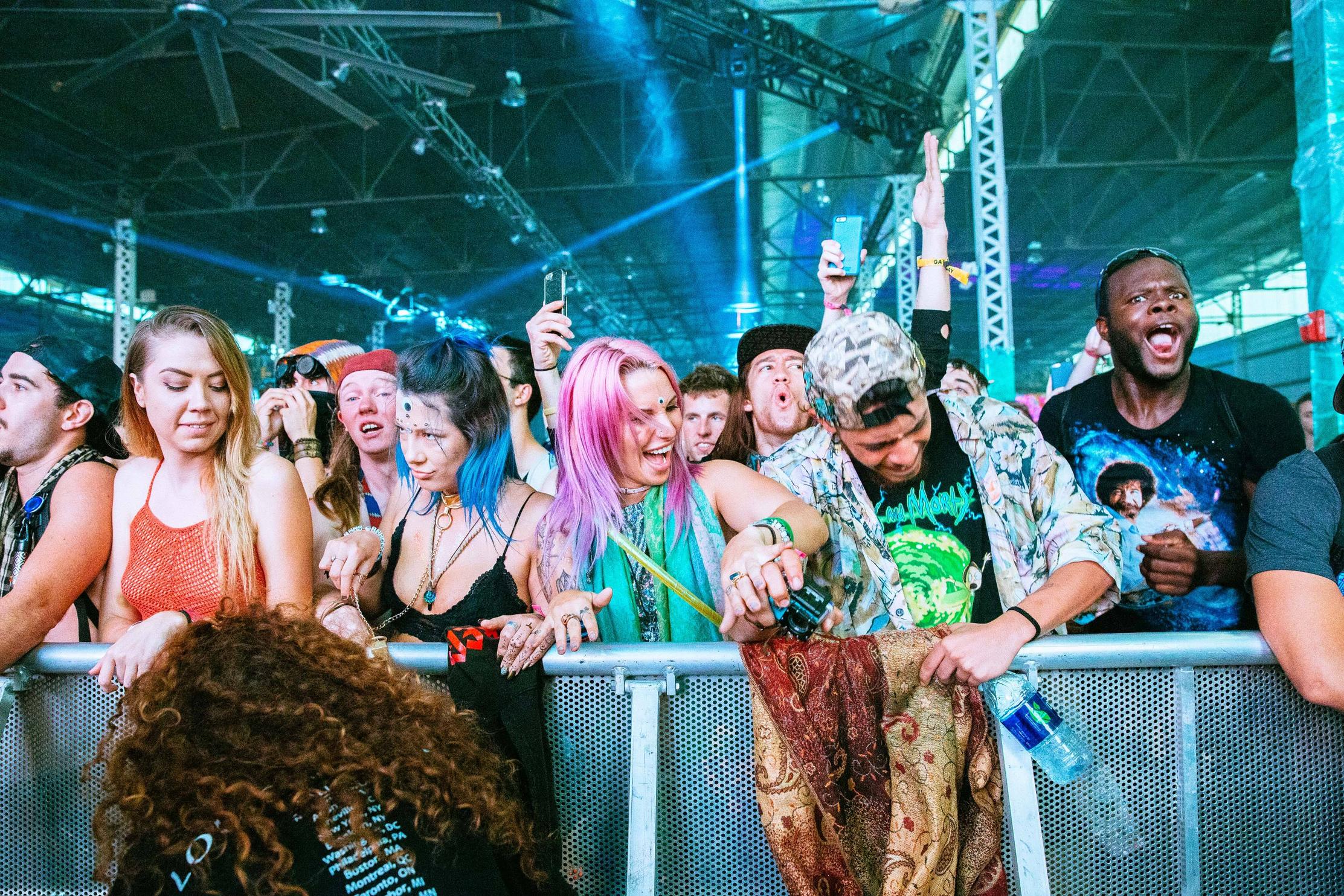 Since it's inception 6 years ago, BUKU has retained a decidedly boutique and artistically expressive vibe that is quintessential New Orleans. As its title suggests, BUKU is an event that shows a deep appreciation for aesthetic and artistry, going miles beyond the traditional festival formula to curate an immersive experience that is everything you didn't know you wanted out of New Orleans. The moment you see the iconic smoke stacks on the horizon, or catch a glimpse of the glittering Mississippi at one of our showstopping sunsets, you can feel it. 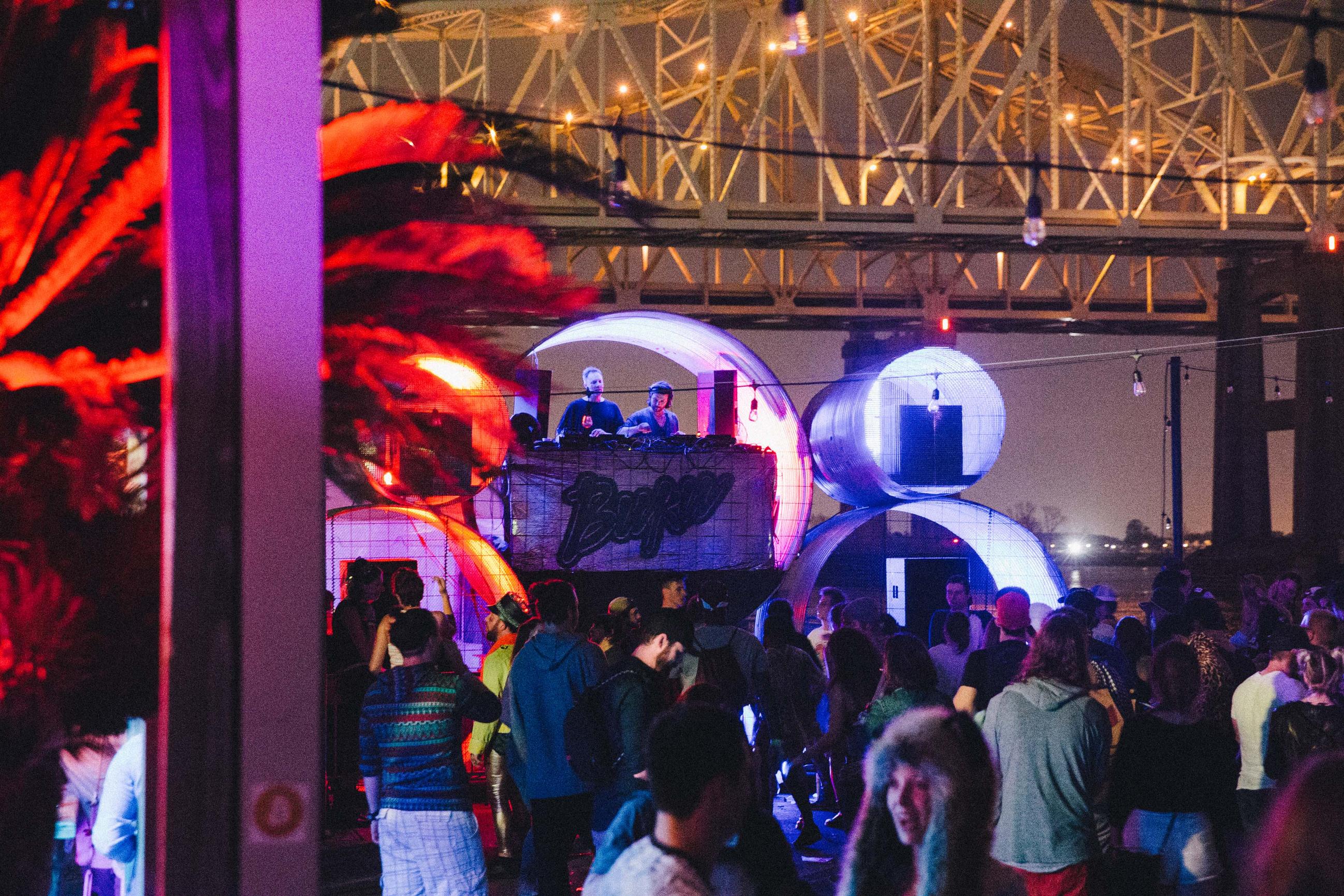 Back Alley | Photo by Bryant Phethmanh

The 2017 iteration of BUKU returned to Mardi Gras World last weekend boasting one of the strongest lineups the festival has produced in its history. Highest billing was awarded to electronic heavyweights deadmau5 and Zeds Dead, Houston rap luminary Travis Scott, and collaborative projects Grizmatik (funk EDM figureheads Griz and Gramatik) and rap royalty supergroup Run The Jewels (Killa Mike and El P). Noticeably missing was headliner Young Thug, whose time slot was replaced at the last minute by Juvenile. BUKU tweeted around 4PM Friday "we just found out that @youngthug isn't coming due to a personal emergency" and the artist has made no public statement further explaining the absence. 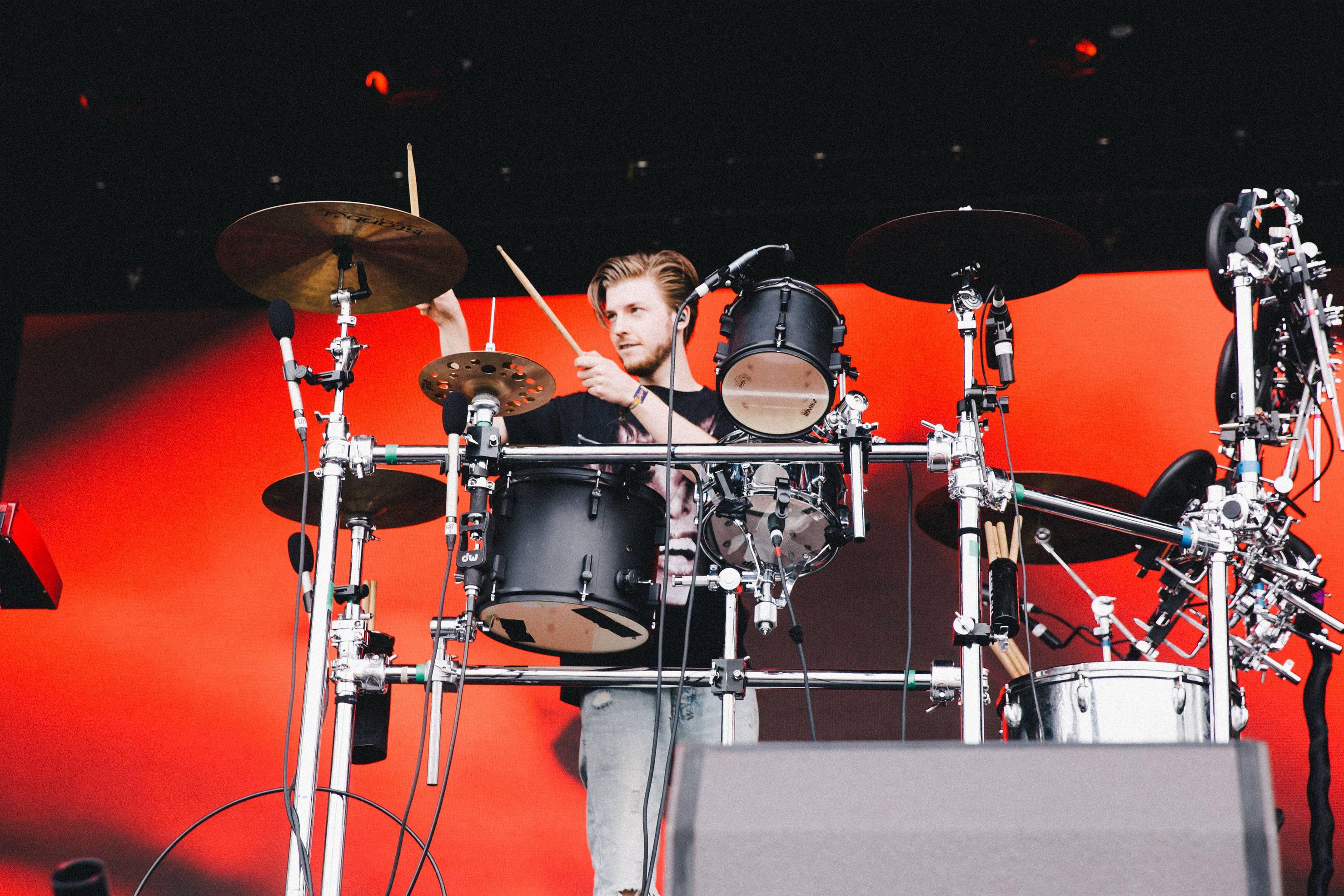 My third BUKU kicked off on a sweet note with one of my most anticipated artists of the weekend, Lido, opening the Power Plant main stage with his earnest and emotional live hybrid set. The Norwegian producer also appeared at last year's event under his jersey club alter ego Trippy Turtle in a raucous b2b with fellow 2017 return act/real life BFF Cashmere Cat. Cashmere's set at the Float Den Saturday evening was a tasteful selection of some of the artist's more recognizable collaborations with the likes of Ariana Grande and Selena Gomez effortlessly coasting atop his signature sultry otherworldly beats. 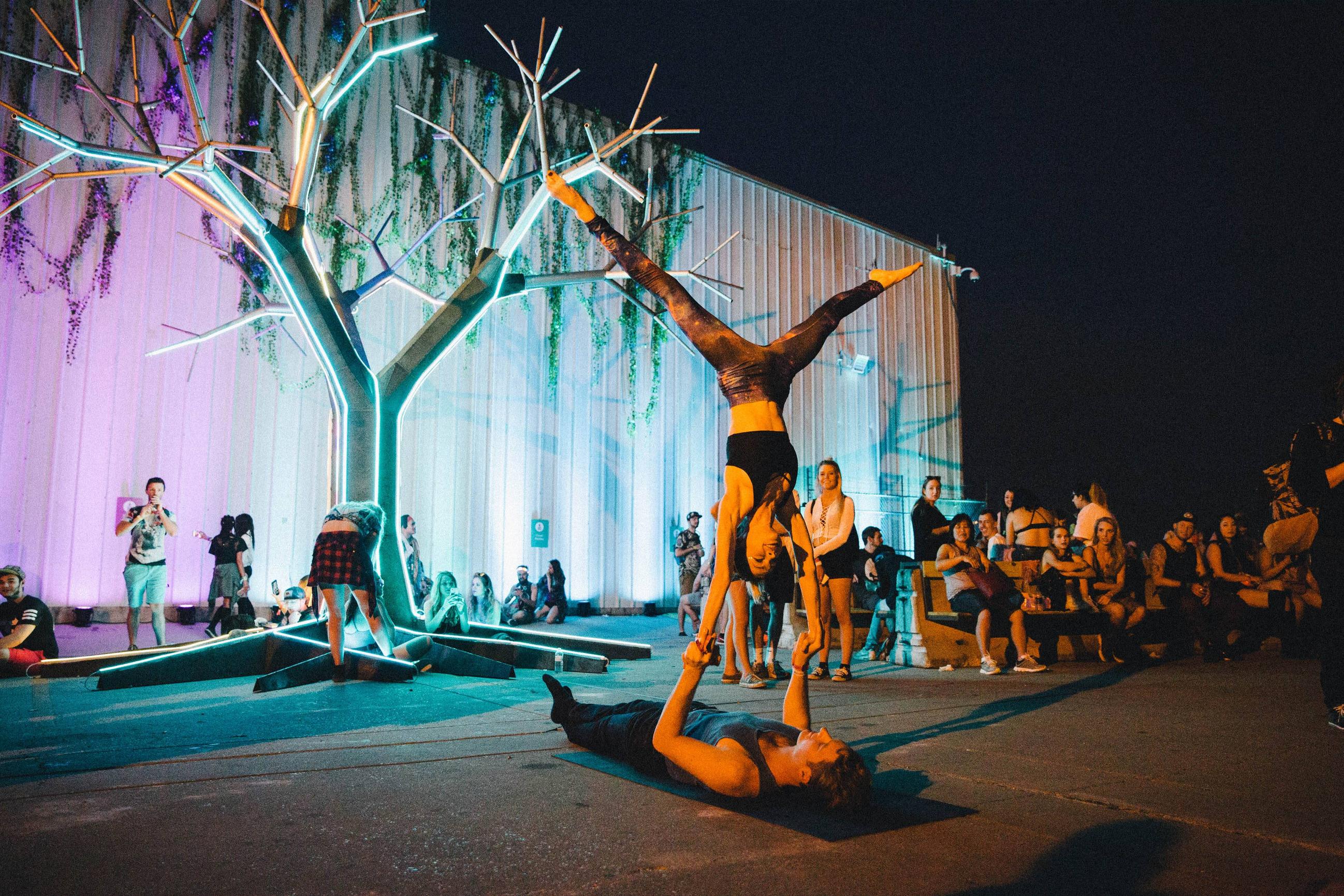 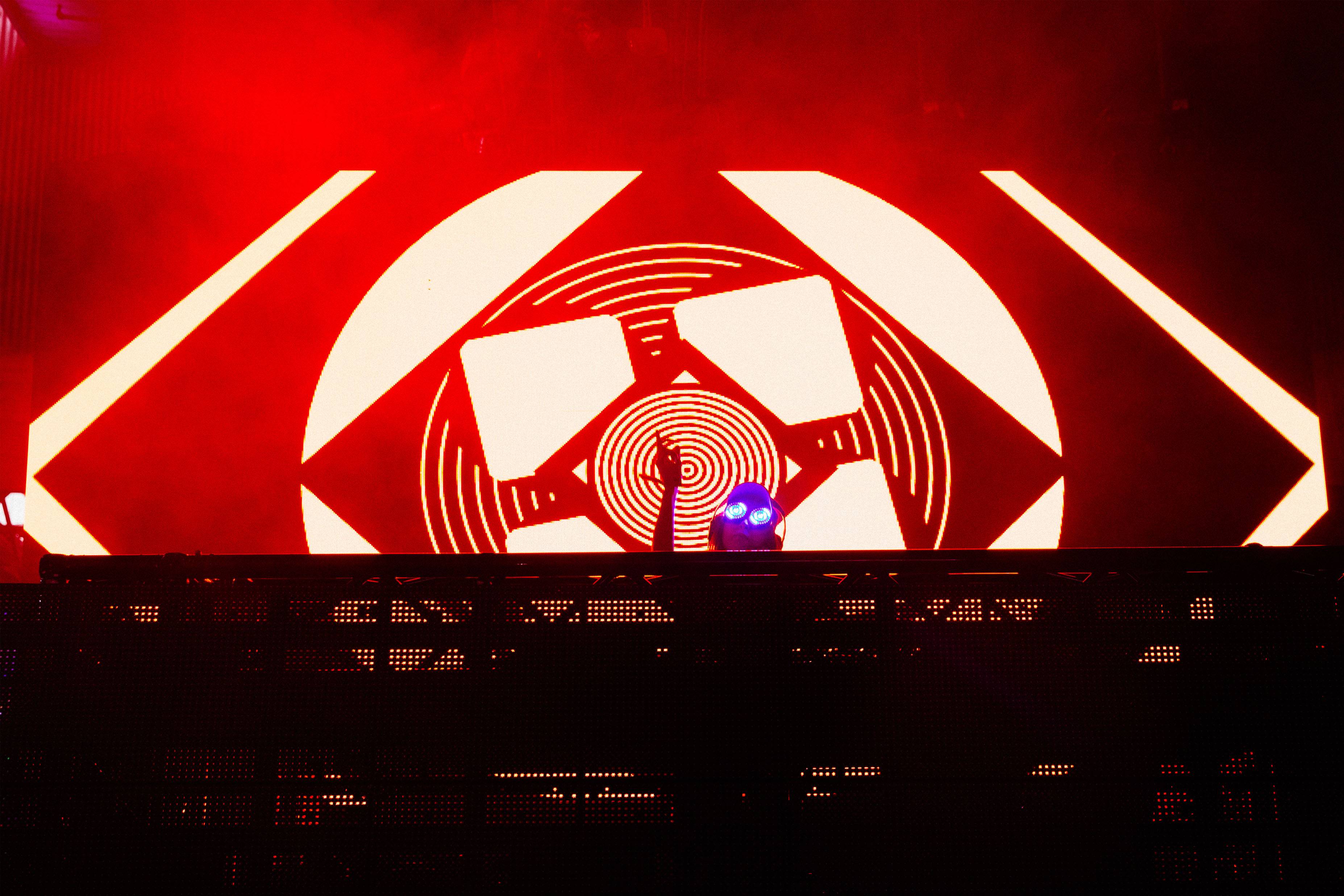 Curtain call of the aptly-named Mardi Gras graveyard Float Den unveiled a vast upgrade in sound from last year, which was utilized with a flourish by some of harder hitting electronic acts over the weekend. Slushii wielded massive dubstep bangers and future feels with the ease of a far more seasoned artist Friday afternoon, setting an lively tone for the basshead favorite stage. Fully delivering upon her hype as mau5trap next in line to the throne, REZZ put a packed Float Den into a trance Saturday with dark pulsating beats, hypnotic visuals and of course her signature swirling LED glasses. One of my favorite #TOOBUKU moments came as the tiny ponytailed powerhouse dropped her rework of Marilyn Manson's "This Is The New Shit" with maniacal glee. In the scheduling home run of the weekend, REZZ was followed immediately by Malaa, the ski-masked lord of stylized hood house, and Herobust b2b Ghastly, which poised two of bass music's rising stars against one other in a high-energy musical chess match. 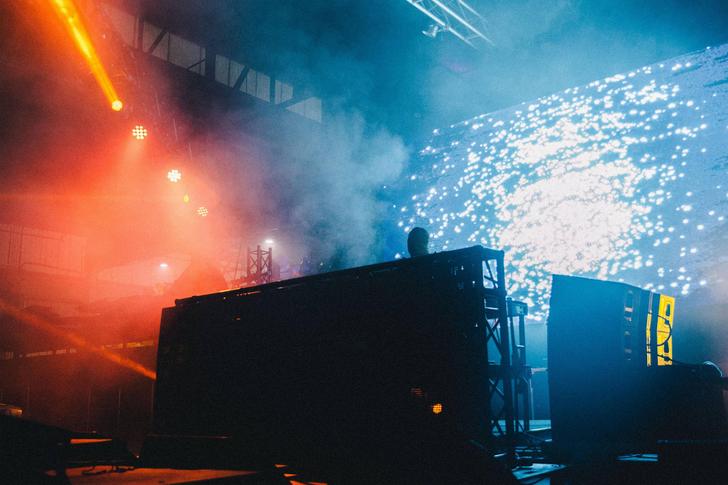 One of BUKU's best-loved traditions is its VIP riverboat the S.S. BUKU, which docks alongside the festival offering exclusive sets, plush viewing areas, and open bar. A packed roster of talent included an evocative and eclectic set from Vancouver producer Ekali and the wonky wobbles of Ganja White Night. VIP viewing areas at the Power Plant and Float Den provide increased space to bust a move or, in the case of the Ballroom, catch an unexpected lounge in a truly epic oversized bean bag. 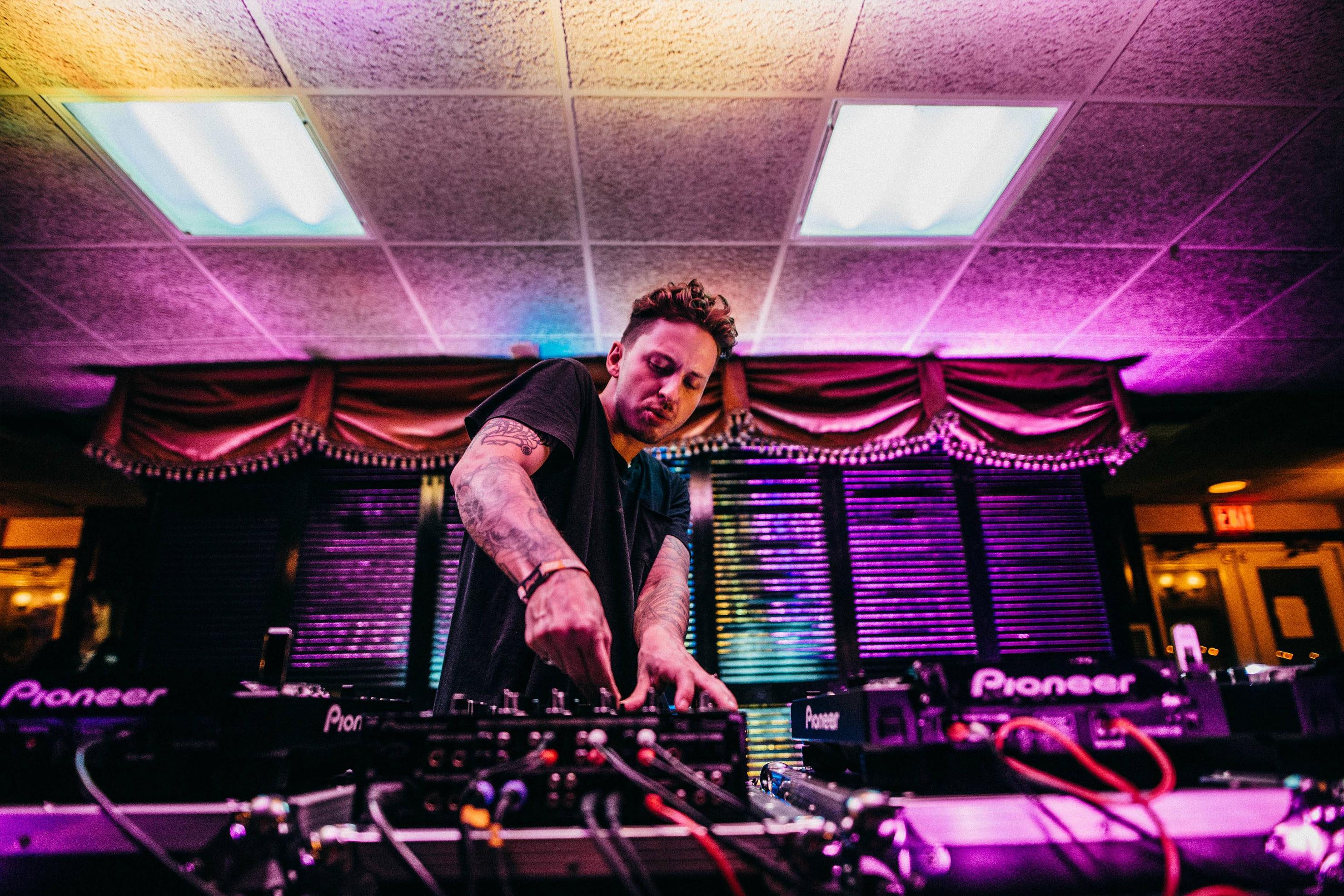 Art is a priority at BUKU, as exhibited by some of its smaller stages which showcase the creativity and skill of local artisans. This year's Back Alley, a mind-bending industrial sculpture of tubular metal, served as the perfect backdrop for the stunning gender bending electro-pop artist SOPHIE. And the Front Porch was perhaps the truest toast to New Orleans of the festival, as a folksy haunted mansion in swirling hues of purple, green, and gold. It's intimate stage provided the perfect spotlight for the immense local talent of indie punk label Community Records and DIY electronic crew Dohm Collective. Memorable art moments abound between stages as well, including an exhibition of live graffiti work, mobile rag-tag music carts and the festival-roaming Buku Breakers break dance team. 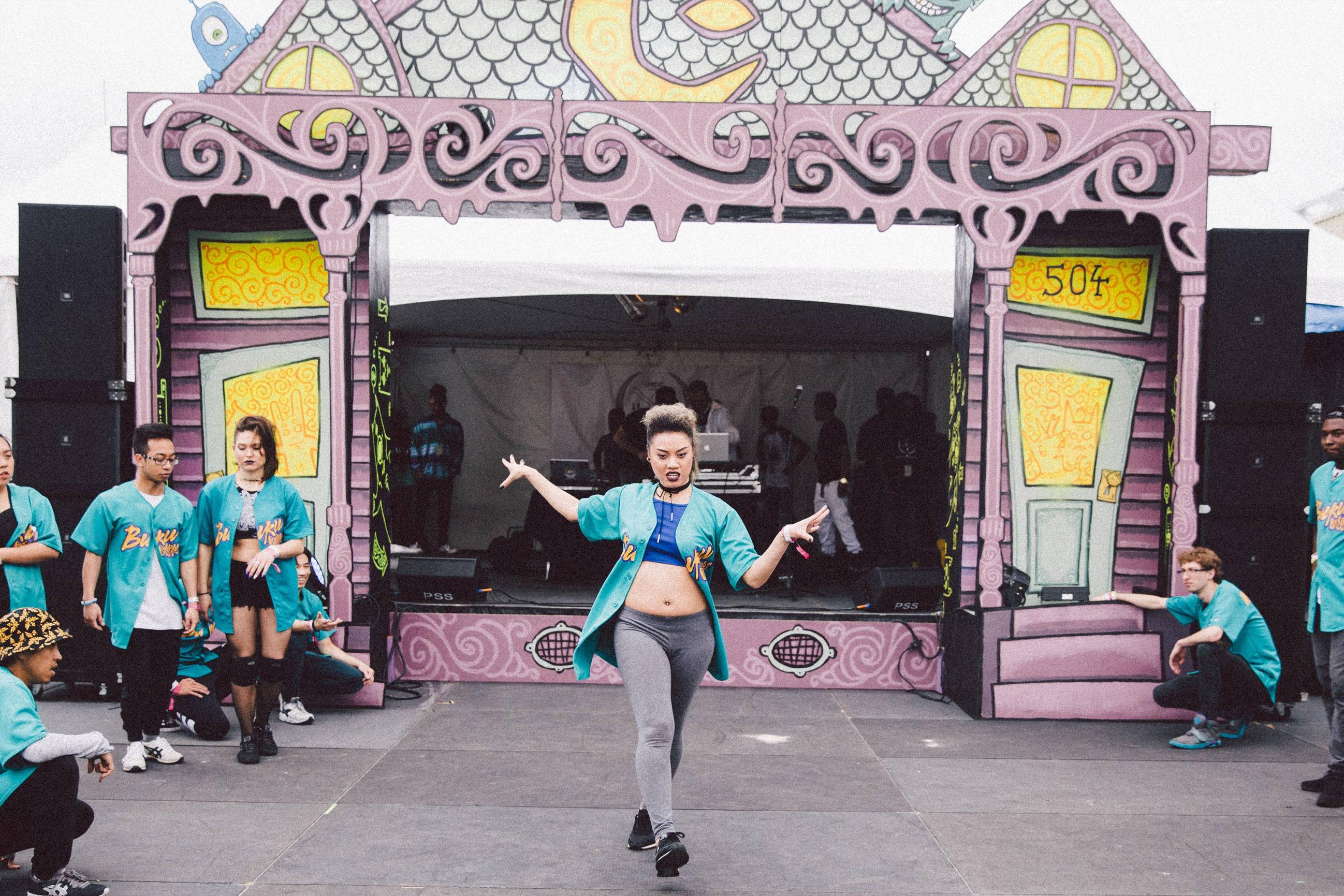 BUKU Breakers at the Front Porch | Photo by Bryant Phetmanh

To the delight of a diverse crowd of seasoned festival veterans and BUKU's notable younger wide-eyed demographic alike, deadmau5 delivered a once-in-a-lifetime electro house masterpiece to close the Power Plant Saturday night. True to his blunt and sardonic reputation, the infamous artist addressed the notably missing Cube 2.1 stage with humor ("in my defense, it's kind of a cube!" he joked of the geometric stage setup), but promised NOLA fans a return visit when the much-anticipated apparatus is debuted. 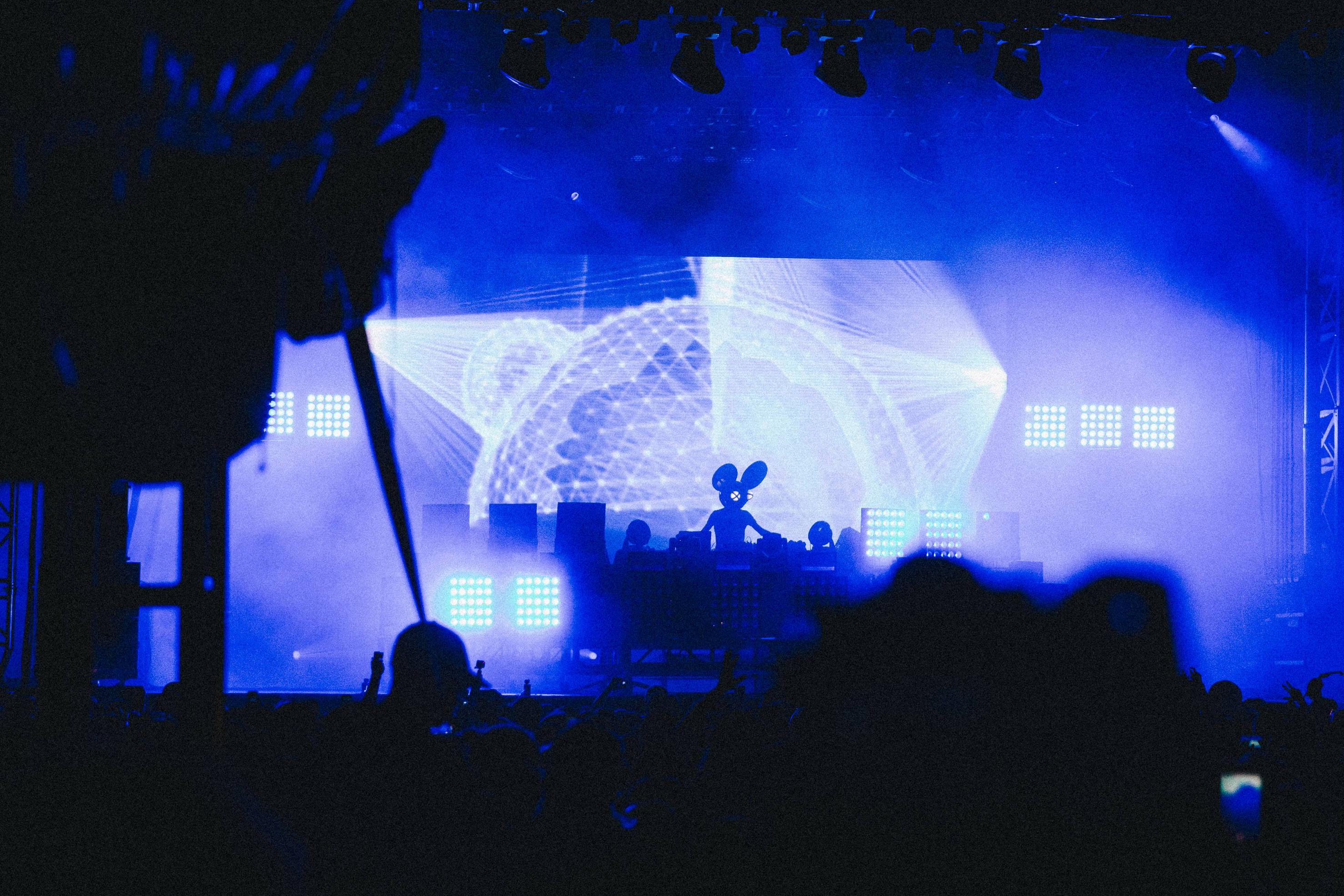 Now that the last of the streamers and glitter have been cleared from the grounds of Mardi Gras World, my reflection on BUKU is that 2017 was its strongest year yet. The promise of inclement weather was one again thwarted by the festival gods, as attendees enjoyed balmy temperatures in the face of possible downpour. Bacchanal was had by bukreatures big and small, now laying their heads down to dream of what magic 2018 will bring. 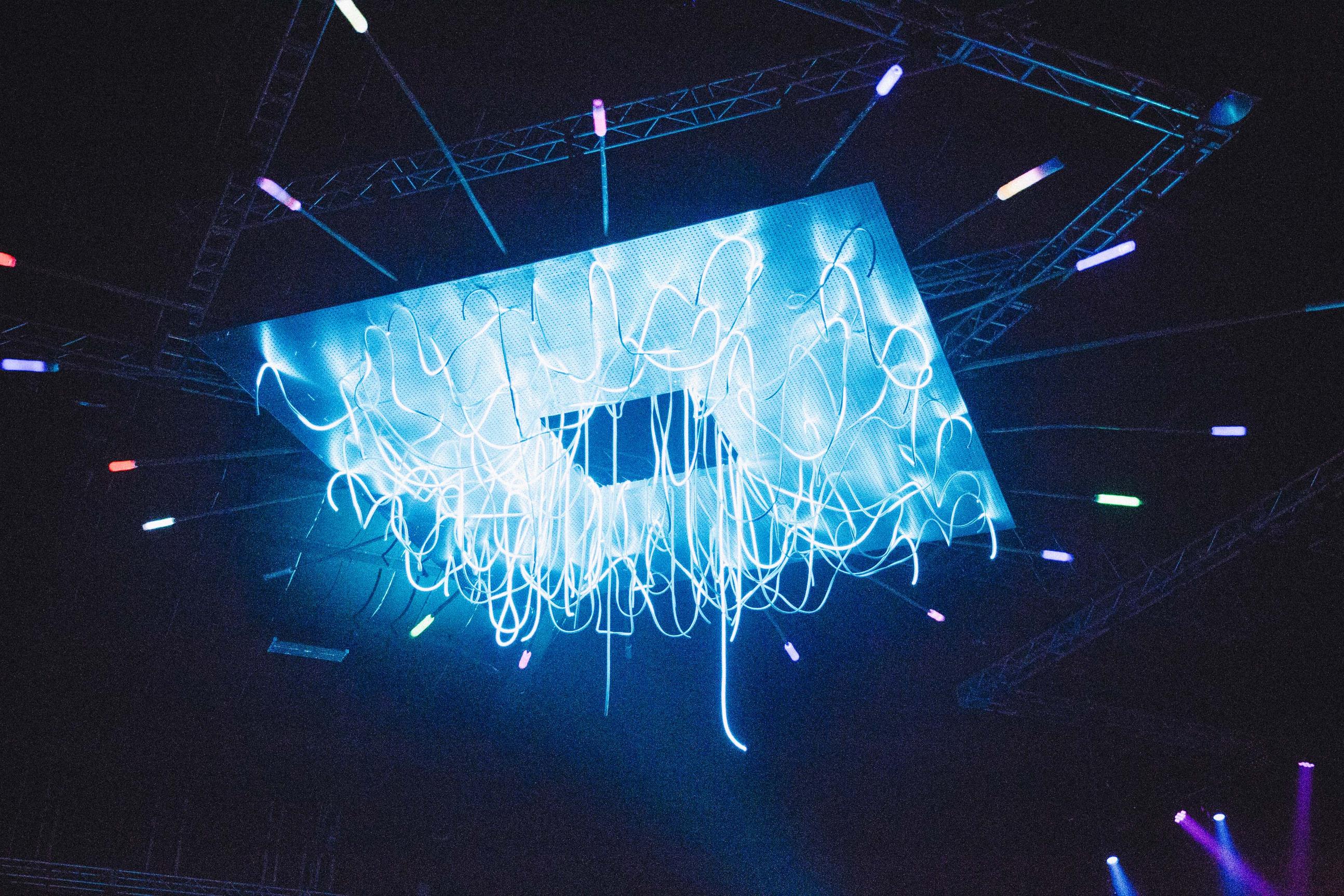