Today The Black Madonna, an iconic woman in the electronic music scene, shared an announcement revealing the acts that would complete her highly anticipated 13-week stint in residency at East London club, XOYO.

The Black Madonna is well recognised as one of the most influential women playing and producing music. Friendly, humble and beautifully outspoken in her views on the equal rights of women within the music industry, Marea Stamper as she is lesser known, shows time and time again that women are by no means inferior to their male peers. Holding strong the belief that women are integral fixtures in the dance music world, Marea is ensuring that this opinion is maintained through her own voice being heard in interviews and online. As well as the XOYO residency, Marea is also hosting a Dance Party series at Chicago's Smart Bar club named DAPHNE. The series will include not just club nights which see women in the headline position, but also workshops and talks around topical issues for women. 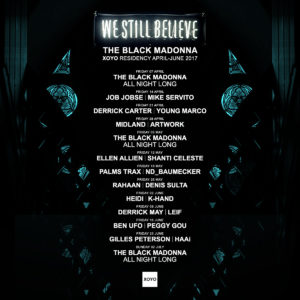