If you are in NYC and are looking for a little fun tomorrow night, head on over to Output for the official after party for the Yeezus Tour. Here is the official word from our friends over at Mean Red

"If you don’t know by now, #Been #Trill is one of the most influential collectives within the music and fashion scene. The crew consists of Matthew Williams, Heron Preston and Kanye’s creative director and longtime confidant Virgil Abloh. They are often highlighted most for their collaborations with some of the best including 40 oz Van, Diamond Supply, SSUR, APC & Kanye, Hood By Air, and now… they keep the trend going by partnering with MeanRed.

This English visionary has been called a “true phenomenon”…with releases on Mad Decent and Sound Pellegrino, L-Vis 1990 started receiving his well deserved recognition for changing the face of underground club music. His Incredibly unique style comes from his musical stew of post-modern tribal house and years of garage heritage… Check out their Fact Mag Mix here.

An essential member of LA’s label/collective Fade to Mind, Total Freedom is J-Cush’s favorite DJ and should be yours, if he is not already. A Lit City Rave regular – the man, the myth, the legend, returns for an extended Halloween aftermath special this Friday. Let his recent mixes do the talking for him.

Corin Roddick and Megan James started Purity Ring, producing catchy, chilling electro pop sounds. Their music has been categorized to fall under the genre of “future pop”. Their first song, “Ungirthed”, was released in 2011 and received critical acclaim. The duo eventually signed with 4AD Records and released their debut album in 2012. They’ll be playing a killer DJ set.
MXM (Maxime Buchi) is a tattoo artist working in London and NY. He also is the founder and creative director of Sang Bleu Magazine and SwissTypefaces. MXM recently collaborated with McQ/McQueen and his company SwissTypefaces designed several logos for fashion houses such as Mugler, Rick Owens, Balenciaga, Damir Doma." 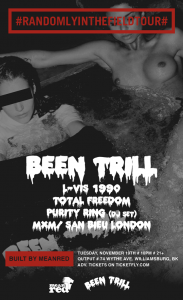