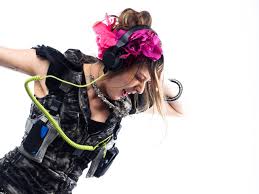 Our friends over at bassAware have some news for you and it involves a device that you can add to silent disco headphones so you can feel the base and have a more immersive experience. Want to hear more, check out the full release below and head on over to kickstarter and help them out.

"(New York, NY) That night at the club, pressed close to the speakers, every drop of bass pulsing your body to its very core – imagine that feeling. Now imagine having it while walking to work. Or while waiting in line at the grocery store. Wherever your headphones meet your portable audio device, envision that scenario becoming your own private, sonic dance party.

Welcome to the world with a bassAware holster. The brainchild of Brooklyn-based inventor Michael White, bassAware is not just next-level wearable technology. It’s an entire dance club packed into a sleek back harness, using vibration to facilitate an experience other portable audio devices haven’t yet explored: the way it feels to love music.

This fashionable tech uses a tactile transducer – a special type of audio driver creating vibration instead of sound – placed on your upper back. The sensations then travel through the body to the inner ear, where the nervous system translates them into “heard” sounds. The result? Your body becomes a walking party, with an immersive bass experience that no one but you can hear or feel.

History in the making

A kickstarter campaign for bassAware is currently backing this big idea as it shifts from prototype into mass production. How did the bass holster first come about?

“As cool as the silent disco was, it really didn’t do justice to a lot of music, like dubstep, hip- hop, glitch-hop. I kept asking myself, ‘Is there any way we can add more bass?’” White explains. Building on his experience fabricating mobile audio systems, in the spring of 2012, White began to assemble the necessary technical pieces and people to build a bassAware prototype.“I hit the ground running. I put in notice at my straight job. I started calling everyone who might be able to help me,” White laughs. A little over a year later, with the support of a product design team, a New York fashion studio, a medical researcher, an electrical engineer and more, White’s innovative idea became a reality. One with more uses than he had previously imagined.

All bass, with all audio devices, all the time

“bassAware fulfilled the idea of adding bass to headphone parties. But as I was testing it out, everyone kept saying to me, ‘I just want to wear this all the time. I want to wear it on the subway, or when I’m in my room, and I don’t want to disturb anyone. And the great thing is that it works in all of these scenarios, with any audio source: your phone, your music player, your tablet, or your laptop.”

Along with mobile partiers, pedestrians, subway goers, students, grocery shoppers or anyone at all who loves music with a heavy dose of bass, another key market served by bassAware is DJs and sound engineers. The device can be used to address the often poor acoustics and sub monitoring system in club booths. Strap on a holster. Problem solved.

It’s even fashionable, with pockets for gear

In addition to being functional, bassAware is also stylish. The device resembles a futuristic gun holster, or a minimalist backpack, with two pockets big enough for a phone, music player or wallet. It's super adjustable and comfortable, fitting an array of body types, both large and small – and it’s unisex, looking great on men and women.

Portable audio devices and their accompanying headphones have been besting one another over sound quality for ages. To date, only one device takes things to the true next level: the level of feeling. bassAware adds physical punch to premium headphones and completely fills out the low end on inexpensive earbuds. The best headphones get better, and low quality headphones sound amazing. All while filling your body with the pulsing sensation of being at the club.

Once you go bass, you’ll never go back."