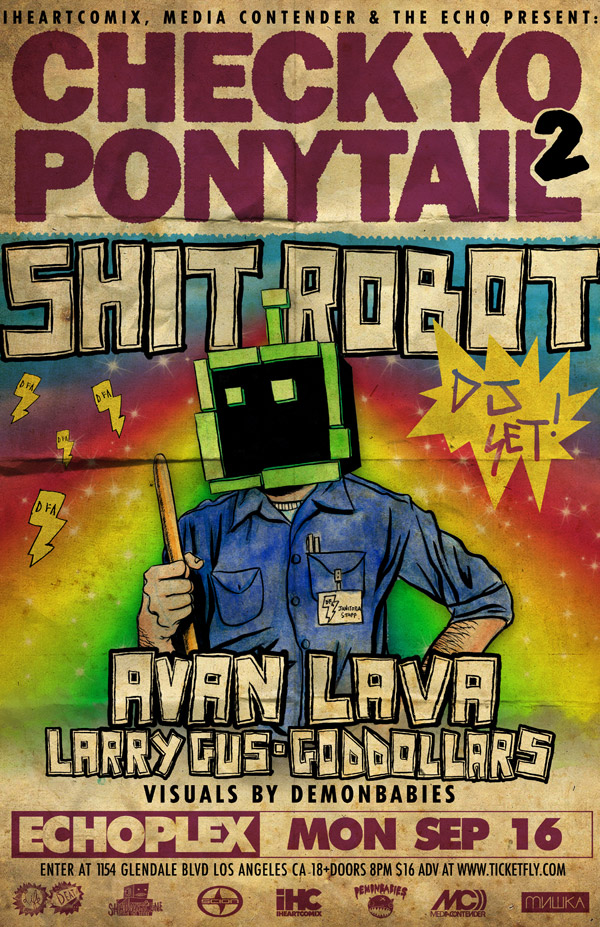 IHEARTCOMIX, appropriately named and run by avid comic fan Franki Chan, has been ruling LA's nightlife scene with an iron fist for roughly ten years now, and it only seems to make sense that they've expanded to hosting events in some of the city's most notorious venues and nightclubs.

Under the IHC name, Chan and co. have also created Check Yo Ponytail 2, which holds a strong presence in the Echo Park region and has given those of us in this city amazing shows ranging from Grimes, Escort, Boys Noize,to Das Racist, and even hosted the first Fool's Gold Day Off Event on the West Coast last year. They have shows every week, and as the diverse past lineups indicate than no name has been able to deny the intimate environment that CYP2 provides for both the artist and audience.

On September 16th, DFA Records signee Shit Robot will be performing at the Echoplex. It's been a few solid years since his debut LP was released in 2010, and while the public rarely heard about what he was up to in the three year gap, it turned out that he'd been quietly developing music in rural Germany. He's now ready to show the world what exactly he'd been creating there, and this show seems the perfect place to finally see it. The recently released single, "Feel's Real" is posted below. Avan Lava, Larry Gus, and Goddollars (of A Club Called Rhonda) will also be performing that night, and it's a must see show for all of those interested in the dance scene.

We've teamed up with the guys over at CYP2 to present two winners a pair of tickets (2) for the event as a giveaway. The show will be jammed pack with DFA enthusiasts, notorious for their dance moves and dedication to the label, and fans of Avan Lava, Larry Gus, and Goddollars know that things can only get crazier with this insane lineup. Tickets for the show can be found here, but for those willing to test their chances, the giveaway will be below.